Barcelona travel to face Deportivo La Coruna in the La Liga with the aim of maintaining their position at the top of the table.

Deportivo La Coruna have a tough task on their hands, not just with respect to the game on Sunday but as regards the overall picture as well. Averaging less than a point a game, the side sits precariously close to the relegation places at 17th on the table and need a couple of results to put some distance between themselves and the relegation scuffle.

Barcelona, on the other hand, have had a miraculous turnaround in fortunes. Looking resigned to bow out of the UEFA Champions League and play catch-up to Real Madrid in the league, things have changed quickly as they completed an unprecedented comeback to advance to the next round of the Champions League.

In the league as well, the Catalans have somehow managed to creep back up to the top of the table, although Real Madrid have a game in hand. And Luis Enrique will be looking for his side to continue their newfound momentum with a win against a struggling Deportivo side.

We at The Hard Tackle take a closer look at the fixture that is Deportivo La Coruna vs FC Barcelona.

Pedro Mosquera and Florin Andone are both set to miss the game due to suspensions, which could mean a place in the starting eleven for Guilherme Dos Santos and Joselu respectively. However, Guilherme is unfit and if he is unavailable come Sunday, it could mean a rare start for midfield veteran Alex Bergantinos.

Deportivo could also be without Sidnei at the back, which could see Raul Albentosa slot in to partner Alejandro Arribas at the centre of the defence. Elsewhere, Gael Kakuta is also a doubt for the strugglers.

New manager Pepe Mel is likely to continue the trend of Deportivo investing heavily into their attacking set-pieces while also routing most of their attacks through the wings. However, Mel would like to cut the tendency to take long shots often and instead go for a more calculated approach.

Unlike their opposition, Luis Enrique does not have many injury headaches going into the Sunday fixture. Aleix Vidal is still nursing his horrible injury while Jeremy Mathieu is also a doubt for the match. Other than them, everyone else is available at Luis Enrique’s disposal, which would surely delight the Spaniard.

Enrique has rotated his squad quite a bit but, in the wake of Real Madrid dropping points recently, the Barcelona boss is likely to play most of his major stars in the bid to pile on more pressure on Los Blancos.

Jordi Alba and Sergi Roberto are set to return to the starting lineup while Ivan Rakitic could drop to the bench again to make way for Andre Gomes. Arda Turan influenced the game in the midweek and could be propelled up to the starting eleven by Enrique, a prospect which looks a bit unlikely, though. 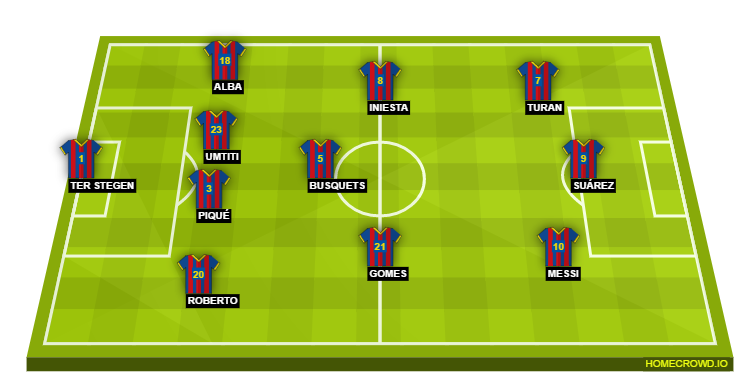 1. Barcelona last lost to Deportivo in the 2007-08 campaign but the loss did come in an away match.

2. The Catalans have scored 12 goals without reply in their last two meetings with Deportivo in the La Liga.

3. Lionel Messi has a stupendous record against Deportivo, with a return of 17 goals and 6 assists in 14 games.

4. Luis Suarez, too, has a remarkable record, with 5 goals and 5 assists in 4 appearances against Deportivo.

We expect the match to be a goal riot, with Barcelona scoring the lion’s share of goals. Luis Suarez and Lionel Messi have a remarkable record against the side while Neymar is likely to continue his godly Paris Saint-Germain form.

Expect the MSN trio to be at their deadly best. (Picture Courtesy – AFP/Getty Images)

The Catalans defence is, however, leaky and could let a goal or two slip in unless Marc-Andre Ter Stegen has another blinder of a performance.