Real Madrid will look to continue from where they left off against Villarreal as they host Las Palmas at the Santiago Bernaebeu on Wednesday night.

La Liga action is back, and this time it’s Gameweek 25. League leaders Real Madrid get back to home comforts on Wednesday as they host 12th-placed Las Palmas at the Santiago Bernabeu, eager to create a winning momentum and maintain their lead at the top of the table.

Their last match saw Zinedine Zidane’s side mount a stirring comeback, as they came back from two goals down to beat Villarreal 3-2 at El Madrigal on Sunday. Goals from Cristiano Ronaldo, Alvaro Morata and Gareth Bale ensured that Los Blancos climbed back to the top of the table.

That result saw Real Madrid get back to winning ways after they had meekly lost 2-1 at Valencia last Wednesday. Their visitors, meanwhile, are going through their worst run of form for the season, having lost four games in a row, with the last defeat coming at home against Real Sociedad on Saturday.

On paper this looks like a straightforward encounter for the hosts, with their visitors struggling to get positive results of late. Ahead of the match, though, let’s take a closer look at Wednesday’s match at the Santiago Bernabeu.

The report on the team news front continues to become increasingly positive by the day, and Zinedine Zidane has just two players left on the treatment table.

Raphael Varane was the latest player to be sidelined, and the French centre-back is out with a hamstring strain. Danilo, too, continues to be unavailable due to the ankle injury he picked up three weeks ago.

Gareth Bale picked up a minor in the match against Villarreal that put had initially put his place in the lineup against Las Palmas in doubt. However, the Welshman has trained since then, and is expected to line up in attack on Wednesday.

Zidane is expected to make two changes, though, with Alvaro Morata and Isco looking likely to start the match on Wednesday, after the duo impressed at El Madrigal on the weekend.

Isco, in particular, changed Real Madrid’s fortunes on the weekend, and earned praise from Zidane in the aftermath of the match. The players are expected to be included in place of Toni Kroos and Karim Benzema on Wednesday. 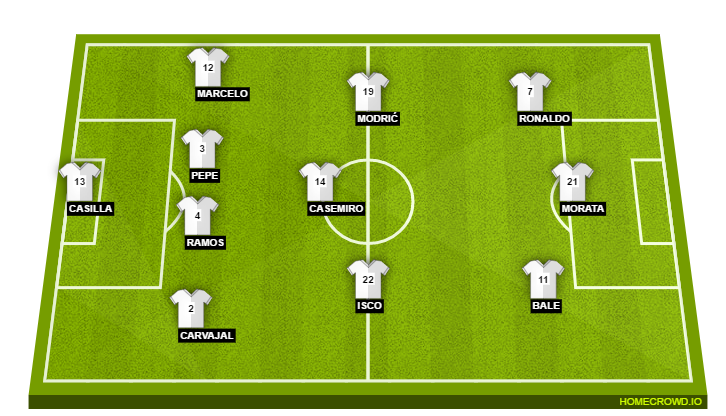 Things don’t get easy for the Las Palmas boss, with as many as four first team players missing through injury on Wednesday. The problems start right at the back, with left-back Helder Lopes (thigh) is doubtful while right-back Michel Macedo (thigh again) will definitely miss the trip to the Spanish capital.

In midfield, Angel Montoro sustained a meniscus injury two weeks ago which is likely to keep him on the sidelines for another month, while defensive midfielder Javi Castellano is also missing with a knee injury with no date being set for his return to action.

Up front, Marko Livaja is doubtful for the match at the Santiago Bernabeu, with a niggling muscle injury troubling him for the last couple of weeks.

The match will also see the return of Jese Rodriguez at Real Madrid for the first time since leaving the Spanish heavyweights at the start of the season. He is currently on loan from Paris Saint-Germain and is likely to feature from the off against his former team on Wednesday. 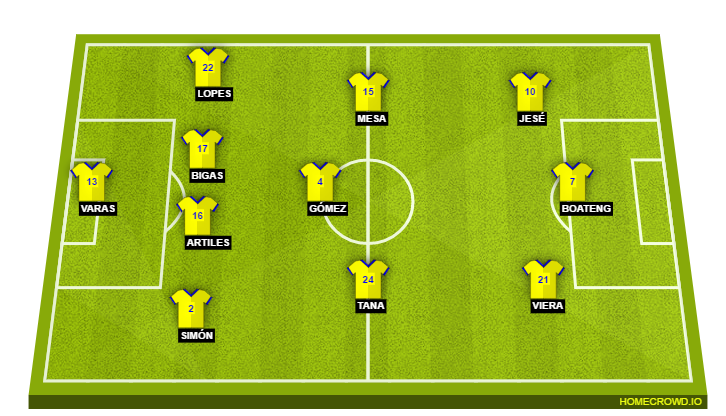 As iterated earlier, this is one of the most straightforward matches that Real Madrid have played in recent weeks. However, games are not won and lost on paper, as seen in the reverse fixture that saw Las Palmas fight tooth and nail against Los Blancos to draw 2-2 at Estadio Gran Canaria in September.

Having said that, it is important to note that Las Palmas are currently going through a bit of a slump – their worst run in the Spanish top flight this season. Quique Setien’s side are finding it hard to net a goal of late, having scored just once in their last four matches.

Real Madrid, on the other hand, would derive a lot of confidence from the come-from-behind win at El Madrigal against Villarreal on the weekend, especially after the loss at Valencia that saw them turn in an underwhelming performance to say the least.

With all that in mind, it is hard to see Las Palmas making much of an impact on the match, and despite Los Blancos’ erratic form this year a win for Zinedine Zidane’s side looks the likeliest of the results. We predict an easy 3-0 win for the hosts on Wednesday.