Manchester United will look to seal their place in the next Round of 16 when they visit Stade Geoffroy-Guichard to take on Saint-Etienne on Wednesday.

Manchester United will be looking to get both their feet into the Round of 16 on Wednesday, when Saint-Etienne host them at Stade Geoffroy-Guichard in the Europa League Last 32 second leg. Jose Mourinho’s side already has a three-goal lead in tow ahead of the visit to France.

The hosts come into this match deflated and sapped of confidence, as they went down 2-1 to Montpellier at La Mosson on Sunday. Meanwhile, Manchester United made it four wins in a row as they bounced back from a goal down to beat Blackburn Rovers 2-1 and advance to the FA Cup quarterfinals.

The reverse leg saw Manchester United hand a comprehensive 3-0 beating to Saint-Etienne at Old Trafford last Thursday, with Zlatan Ibrahimovic the star of the match, thanks to his first ever hat-trick for the Red Devils.

The match will be played on Wednesday instead of the usual Thursday that is reserved for Europa League fixtures as there are security concerns with Lyon playing their game only 50km away. The Hard Tackle now takes a closer look at the return leg of the Europa League Last 32 match.

The good news for Saint-Etinne manager Christophe Galtier is that he does not have many injury concerns on his hands. Only one player is unavailable through fitness issues, with none being absent due to suspension.

The player is winger Oussama Tannane, and the 22-year-old Moroccan is out due to a groin injury on Thursday. Apart from Tannane, though, Galtier has a full strength squad at his disposal and should field his strongest possible side on Wednesday.

The battle of the Pogbas will continue in the second leg as well, and Florentin Pogba is likely to start as left-back alongside captain Loic Perrin, Kevin Theophile-Catherine and Kevin Malcuit, when the quartet will be tasked with keeping the dangerous Manchester United attack at bay. 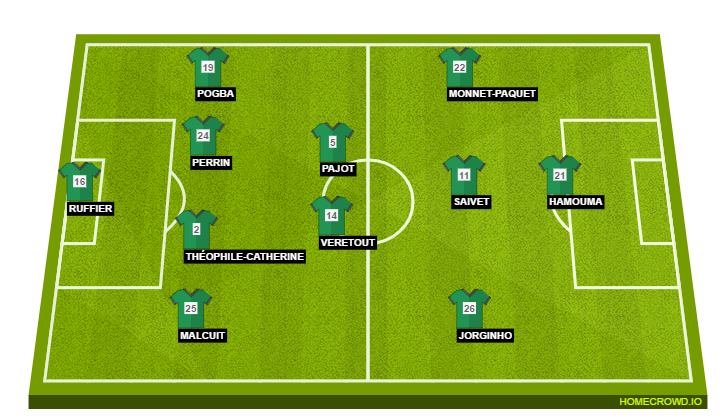 The fixtures are coming thick and fast for Manchester United and Jose Mourinho has a massive task of keeping his players fit and firing with his side playing twice a week for large parts of the remainder of the season.

However, the Manchester United boss does have a few players missing from his travelling squad for Wednesday due to injuries and suspension. Wayne Rooney still hasn’t recovered from his muscular problem while Phil Jones remains out with foot injury.

Ander Herrera is suspended for the encounter after picking up his 3rd yellow card in the tournament. Meanwhile, Luke Shaw hasn’t travelled with the Manchester United squad either, meaning Daley Blind should start at left-back, with Chris Smalling and Eric Bailly at the heart of the the Red Devils’ defence.

Keeping Zlatan Ibrahimovic and Paul Pogba fresh will be Mourinho’s top priority and the duo could start from the bench yet again on Wednesday. As a result, Bastian Schweinsteiger could earn his first start in Europe this season, while Marcus Rashford is likely to start up front. 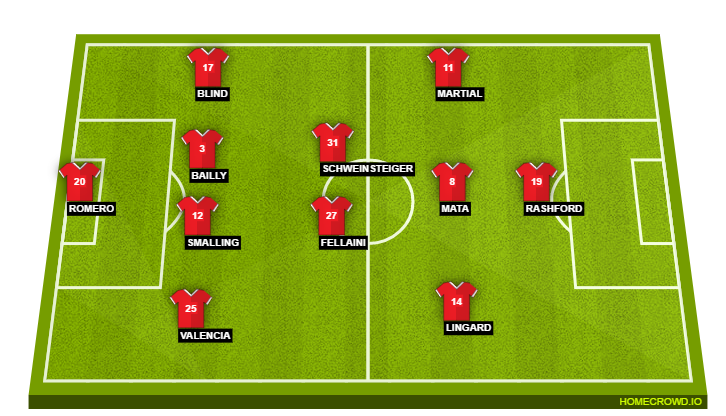 Manchester United seem to already have a foot into the next round in Europa League, but as they visit Stade Geoffroy-Guichard on Wednesday to face Saint-Etienne, they would like to take both feet into the Round of 16.

With a healthy lead in the bag, and with the EFL Cup final against Southampton to play on Sunday, it is likely that Jose Mourinho will rest some of his key men, two of them being Zlatan Ibrahimovic and Paul Pogba. The duo should be available from the bench, though, if need be.

Christophe Galtier, on the other hand, would like his players to give it their all despite having a three-goal deficit to their visitors. Saint-Etienne could go on the attack right from the off and we could have an enticing fixture on our hands. We predict a win for Manchester United by the odd goal in three.