The marquee clash of the Round of 16 in the UEFA Champions League sees Paris Saint-Germain play host to Barcelona at Parc des Princes on Tuesday.

The Round of 16 of the UEFA Champions League kicks off from Tuesday, with the two best teams from each group in the first round of the tournament vying for a place in the quarterfinals of the premier European club competition.

One of the standout clashes of the first knockout stage of the tournament sees Paris Saint-Germain take on Barcelona, and the Ligue 1 champions will be hosting their Spanish counterparts at the Parc des Princes in the first leg on Tuesday.

Les Parisiens have reached the Last 8 in each of the last four seasons, but they will face the unenviable task of overcoming Barcelona for that spot this year after they ended runners up in Group A behind Arsenal, while the visitors finished on top of their group ahead of Manchester City.

However, they do have the advantage of hosting the first leg and have the opportunity to take a healthy advantage to Camp Nou. On the other hand, Barcelona will be looking to bag at least one away goal to make their jobs easier for the return leg.

The Hard Tackle takes a closer look at what promises to be an intriguing encounter between PSG and Barcelona at the Parc des Princes on Tuesday night.

Unai Emery will be boosted by the fact that he doesn’t have many absentees from his squad with only one player each unavailable due to injury problem and suspension.

Javier Pastore is a major doubt for the PSG boss having recently recovered from a knee injury. He faces a late fitness test to determine his availability for the visit of Barcelona but will not be able to complete the entire duration of the match as Emery confirmed he is not fit enough to last 90 minutes.

Meanwhile, Thiago Motta will be a major miss in midfield, and Emery will be without the services of his best defensive midfielder, and should instead rely on the midfield trio of Blaise Matuidi, Marco Verratti and Adrien Rabiot.

A positive news for Emery, though, is that rock solid Thiago Silva is expected to be reinstated into the starting lineup after the Brazilian was rested for PSG’s encounter against Bordeaux on the weekend. He is expected to take his place alongside Marquinhos at the heart of the PSG defence.

Meanwhile, Julian Draxler is expected to make his first start in the Champions League for PSG. The German is expected to combine with Angel Di Maria and Edinson Cavani in a front three that will be eager to give the Barcelona back line a hard time on Tuesday. 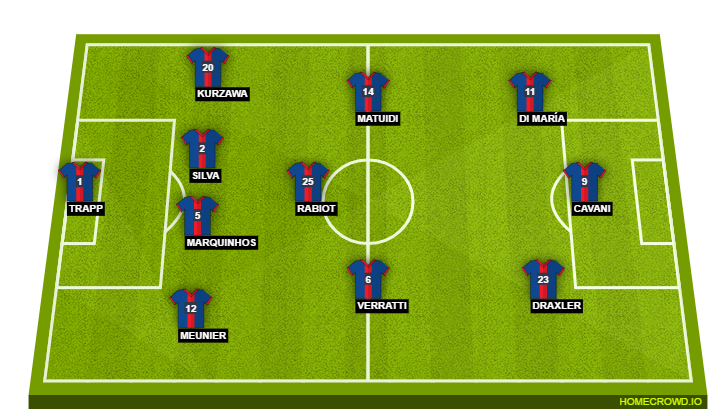 Luis Enrique, on the other hand, has a mixed bag of good and bad news, with three players out with mid-to-long term injuries and two of his most important players returning to the squad for the visit to the French capital.

The bad bit first, and Aleix Vidal is set to miss the rest of the season, just as he was starting to establish himself in Enrique’s plans, after he dislocated his ankle in Barcelona’s 6-0 demolition of Alaves on the weekend.

The other two absentee are Arda Turan (groin) and Javier Mascherano (hamstring), who are both expected to sit out for at least a couple of weeks with their respective injuries.

The good news, though, is that Enrique doesn’t have to worry about their replacements. That is because pivotal midfield ever presents, Sergio Busquets and Andres Iniesta are both back, and are expected to start in the centre of the park for Barcelona.

At the back, Gerard Pique is available as well after being rested for the defeat of Alaves. Rafinha is returning to the squad, and will play the match with a face mask to protect the nose that was broken earlier this month 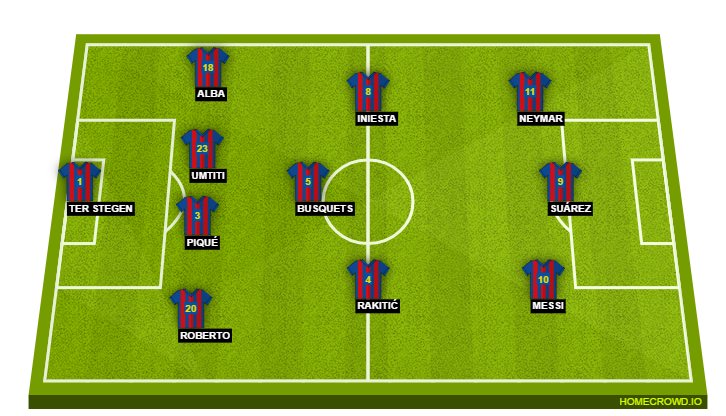 Messi, Suarez and Neymar are back to their best, making Barcelona the favourites for Tuesday. (Photo courtesy – Gonzalo Arroyo Moreno/Getty Images)

This is one of those matches that are tough to call with both sides bringing their own sets of strengths that can trump the other, and weaknesses that can be taken advantage of.

Barcelona struggled at the start of the season with the defence being susceptible and Enrique struggling to find the balance in midfield whenever Iniesta has been forced to sit on the sidelines. However, their attacking trio is unmatched by any other in the world and Lionel Messi and Luis Suarez have hit tons of goal again this season.

Neymar is beginning to find his goalscoring touch at the right time, and with Barcelona not losing a game in 11, they come into this match having rediscovered their best form at the right time.

The hosts, meanwhile, have had an up and down season, and would have been disappointed to finish runners up to Arsenal in the group stages. Their domestic fortunes haven’t been great either, with PSG currently trailing AS Monaco in the Ligue 1 table.

The attack struggled at the start of the season, with the midfield also failing to support the frontmen properly. But, Emery is starting to find his groove at the right time and the Parisian club has been picking form at just the right time.

Julian Draxler has brought with himself a breath of fresh air to the attack and with Angel Di Maria starting to play at his best again, PSG could be primed to trouble the Barcelona backline consistently on Tuesday. We predict an odd goal win for the visitors, though, with Messi and co. looking unstoppable at the moment.