Manchester United will look to continue their charge towards the Top 4 when they host Watford at Old Trafford on Saturday.

It’s Gameweek 25 in the Premier League and Manchester United host Watford at Old Trafford on Saturday evening when Jose Mourinho’s men will be looking to continue their unbeaten run in the league to keep the pressure on their Top 4 rivals.

Jose Mourinho’s side come into this match on the back of a 3-0 win over Leicester City at the King Power Stadium last Sunday. That win, a first in four league games for the Red Devils, extended their unbeaten streak to 15, which is also the longest of all sides in the top 5 leagues in Europe.

Walter Mazzarri’s men, meanwhile, come into Saturday’s fixture on the back of two tenacious wins by the odd goal over Burnley and Arsenal. The Hornets are unbeaten in four, a sequence of results that has seen them re-enter the top half of the table, and they’re currently 10th with 30 points.

The reverse fixture at Vicarage Road ended in a demoralising loss for Manchester United, as late goals from Juan Zuniga and Troy Deeney condemned Mourinho’s side to back-to-back defeats in the Premier League.

As Manchester United look to take revenge of that uncharacteristic defeat in September, The Hard Tackle takes a closer look at Saturday’s encounter at Old Trafford.

Jose Mourinho has one less injury concern to worry about from last week, with Wayne Rooney back into the picture after missing the trip to the King Power Stadium last week due to illness. The Manchester United captain is expected to take his place on the bench on Saturday.

That leaves the Manchester United boss with just Phil Jones on the treatment table, as the defender continues to remain absent with the foot injury he sustained in the goalless stalemate against Hull City two weeks ago.

In his absence, Chris Smalling and Eric Bailly are expected to continue in the heart of the Manchester United defence, with Mourinho indicating the same in his pre-match press conference. Marcos Rojo is also available after being forced off at half-time against Leicester last week.

Meanwhile, Luke Shaw and Anthony Martial are pushing for more game time in the first team, and the struggling duo could get to see some action on Saturday.

Shaw, in particular, would be eager to make his first start since November, looking to make amends after what was one of his worst performances in a Manchester United shirt in the reverse fixture against Watford. 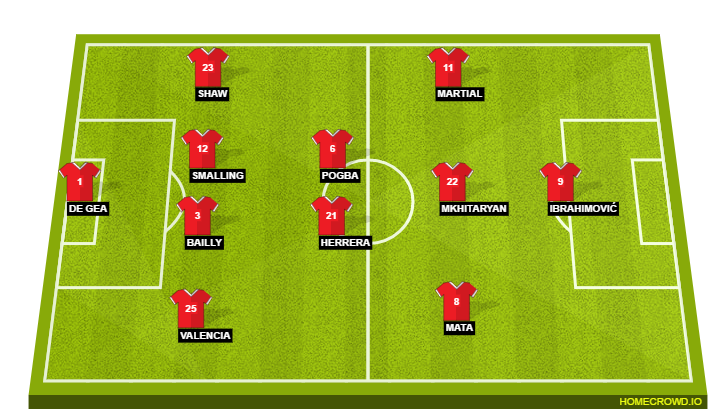 Walter Mazzarri doesn’t quite have the luxury of having a near full strength squad at his disposal, with as many as five players unavailable due to various injuries, with two additional players being doubtful for the visit to Old Trafford.

Meanwhile, Miguel Britos and Valon Behrami are also doubtful for Saturday, after missing training days in the week. The duo will face late fitness tests to determine their availability, and Mazzarri will be sweating to have them both available.

As far as the formation is concerned, Mazzarri is expected to stick the system that worked against Arsenal two weeks ago, with a back three of Craig Cathcart, Younes Kaboul and Sebastian Prodl charged with keeping Zlatan Ibrahimovic and co at bay on Saturday. 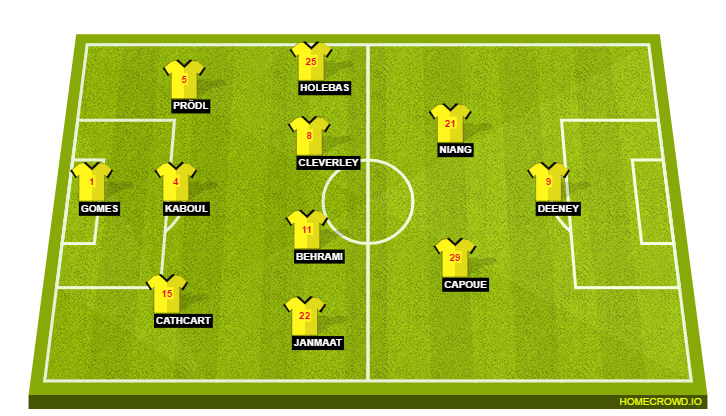 Zlatan Ibrahimovic will look to make the embarrassing memories of the 3-1 loss at Watford a distant memory when The Hornets come visiting to Old Trafford. (Photo courtesy – Laurence Griffiths/Getty Images)

Manchester United will be looking to extend their unbeaten run to 16 on Saturday, and they will be eager to make it a ninth win instead of an eighth draw when Walter Mazzarri’s Watford come visiting.

Jose Mourinho’s side have looked like a side reborn ever since the thumping loss they suffered at the hands of Chelsea more than three months ago. But, if there’s been one big issue holding them back during their unbeaten run, it is their struggle to blow the opposition away at home.

A record of six draws at home is a mark of that, and five of the seven stalemates in the unbeaten run have, in fact, come at Old Trafford. Creating chances hasn’t been a problem for Manchester United but finishing them off has certainly been, and they will be hoping that they can recreate the magic from last Sunday against Watford.

Talking of Watford, Walter Mazzarri’s men have rediscovered their swagger in recent weeks, and the addition of M’Baye Niang has been a masterstroke from the Italian tactician. The Frenchman has added a breath of fresh air in the side and he has impressed ever since making the move from AC Milan.

Having said that, Manchester United have been hard to break down, and the Red Devils have only conceded seven goals ever since leaking four to Chelsea. We, thus, predict a 2-0 win for Mourinho’s side, but they may have to work hard for it.