Manchester United head to the King Power Stadium to face the struggling champions Leicester City on Sunday, as they look to keep pace with their rivals in the Top 4 race.

Defending Premier League champions Leicester City host Manchester United at the King Power Stadium on Sunday, in what will be the last match of Gameweek 24. With both teams desperate to get back to winning ways, anything other than three points will be unacceptable for the two sides.

Leicester City brought the shock factor in the 2015/16 season, but their dismal defence of the title they won only eight months ago was just as unexpected. The champions have capitulated in the current campaign and they shockingly lie perilously close to the drop zone, only two points ahead of 18th-placed Crystal Palace.

Meanwhile, Manchester United have undergone a terrible run of form ever since their winning run was ended by Liverpool at Old Trafford last month. Jose Mourinho’s side have only won once in four matches in all competitions since then, and are currently on a three-match winless run in the Premier League.

The hosts come into this match on the back of a deflating 1-0 win at the hands of the promoted Burnley, as their goalscoring struggles continued in the midweek. Meanwhile, Manchester United failed to find the back of the net as well, as the Red Devils were frustratingly held to a goalless draw by Hull City on Wednesday.

The reverse fixture saw Manchester United hand Leicester one of the biggest defeats of their campaign, as Mourinho’s men romped to a resounding 4-1 win at Old Trafford. And the Portuguese manager will be hoping for more of the same from his charges as they visit the home of the champions on Sunday.

The Hard Tackle takes a closer look at what is a crucial fixture for both Leicester City and Manchester United and their fortunes for the rest of the season.

Leicester manager Claudio Ranieri has a few absentees for Sunday’s visit of Manchester United, with attack, ironically, the worst affected of any of the departments, keeping in mind the Foxes’ struggles in front of goal.

Algerian striker Islam Slimani has long returned from national duty, but remains unavailable for Sunday’s match as he continues his recovery from groin injury. Meanwhile, fellow striker Leonardo Ulloa is also out with a thigh injury, but has resumed light training this week.

In midfield, Daniel Amartey remains absent due to national duty, with Ghana competing in the third-place playoff in the Africa Cup of Nations. The defence, though, will be reinvigorated by the addition of on-loan Udinese centre-back Molla Wague and the Malian is likely to make the matchday squad on Sunday.

Meanwhile, Riyad Mahrez has rejoined his Leciester teammates following Algeria’s elimination from the Africa Cup of Nations last month, and his return is set to spark some life into an attack that failed to score a single goal in the league through January.

The winger, along with the struggling Jamie Vardy will have the onus on them to trouble a Manchester United defence that has shown signs of being susceptible to quick counter attacks in recent weeks, and Ranieri will be hoping that last season’s heroes can turn on the style once again on Sunday. 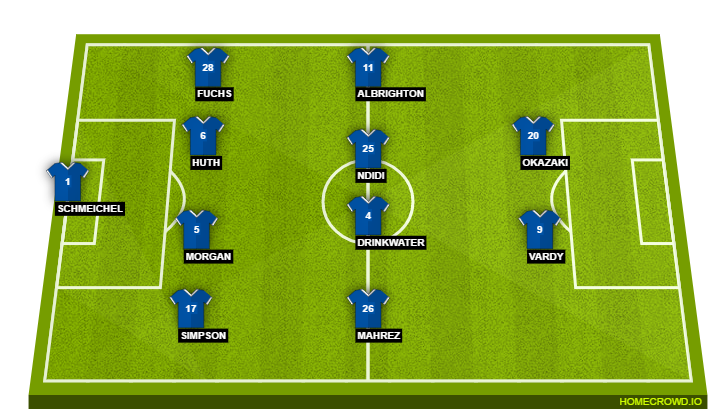 Manchester United manager Jose Mourinho, on the other hand, doesn’t have a lot of injury concerns on his hands, with just a single first team regular missing from his travelling squad for Sunday due to fitness issues.

That man is Phil Jones, with the English centre-back out with a bruised foot that saw Mourinho being forced to take him off after just 55 minutes in the goalless stalemate against Hull in the midweek.

While Jones did subsequently give a positive report on the injury, Mourinho indicated that he is unwilling to take a risk on the Englishman. Chris Smalling is likely to partner Marcos Rojo in the heart of the Manchester United defence in Jones’ stead.

Meanwhile, academy product Dean Henderson is set be in the squad travelling to Leicester on Sunday, having been recalled from his loan spell at Grimsby Town following an injury to third-choice goalkeeper Joel Pereira.

All eyes, though, will be on Zlatan Ibrahimovic and Paul Pogba, with the duo experiencing a slight dip in form last month and failing to finish the chances coming their way. Michael Carrick’s form will be crucial too after the veteran midfielder was subbed off early in Manchester United’s last two league games by Mourinho. 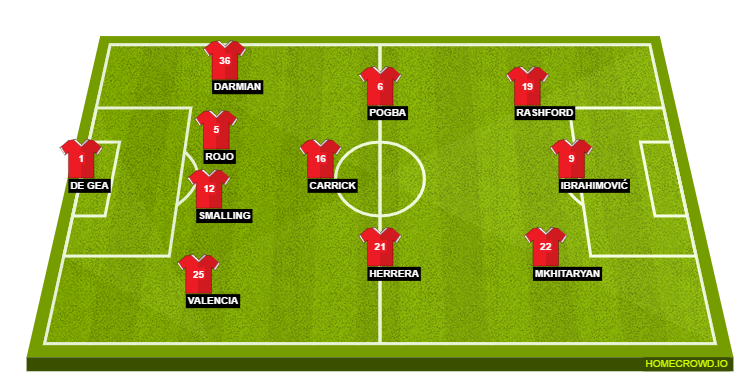 After the unbelievable highs of 2015/16 have followed the disappointing lows of 2016/17. Riyad Mahrez had the world at his feet last season, as he combined effortlessly with Jamie Vardy in attack to lead and exciting Leicester side to the Premier League title, scoring 17 goals to end fourth in the top scorers charts last season.

However, in the current campaign Mahrez has been picture of struggle, failing to match the heights of last season, and failing to make much impact for Ranieri’s side. Number tell the tale as well, with the Algerian bagging three goals and as many assists in 21 games.

As Manchester United come visiting, though, Leicester will need last season’s talisman to be at his best in order to stand any chance of beating the formidable Manchester United side that hasn’t lost a single game in 14 in the Premier League.

Paul Pogba will be under the spotlight against Leicester City on Sunday. (Photo courtesy – Laurence Griffiths/Getty Images)

The prodigal son returned to Old Trafford at the start of the season, and Paul Pogba’s comeback to Manchester United was greeted with a lot of excitement and fanfare, with the Frenchman showing what exactly he can do with his successes with Juventus.

However, his return to English football has been a mixed bag of fortunes with Pogba blowing hot and cold all through the season. Some strong performances have been followed by a few frustrating displays in midfield, with the France international also accused of being flashy when simple things could easily pay off.

January was another frustrating month was the midfielder, with the match against Liverpool at Old Trafford last month showing just how frustrating Pogba can be when he experiences the lowest of the lows.

However, with the season about to enter its most crucial juncture, Jose Mourinho needs all his key figures to be at their best, with Pogba in particular important with his performances from the centre of the park. And it all starts with the visit to Leicester City, where Pogba will be expected to influence the match from midfield.

If there ever was a match that established the importance of winning three points in the Premier League, it is Sunday’s match between Leicester City and Manchester United.

To say that Leicester have been poor in their defence of the Premier League title would be a gross understatement of just how woeful Claudio Ranieri’s men have been in the 2016/17 season. So much so, that if results go against them this week, they could drop into the relegation zone.

On the other hand, Manchester United have been tough to beat in the last three months, evidenced by the fact that they haven’t lost a single league game ever since the disastrous 4-0 loss at Chelsea in October.

However, the run of 14 league games without a loss also includes seven draws, with a spate of stalemates resulting in Jose Mourinho’s side dropping several points through the course of the season. However, it is also important to note that the Red Devils have won more games on the road than at Old Trafford this season.

Leicester, meanwhile, are struggling to put the ball into the back of the net, having not scored even once in league outings in 2017. With the Foxes back four looking at its worst in more than a season, we could well see the Manchester United attack romp back to top form on Sunday. We predict a comfortable 2-0 win for the visitors.