Antonio Conte’s side dropped two points – or gained one depending on how you look at it – against Liverpool last weekend in a result that Chelsea will have been more pleased with than the Reds. Chelsea do not need to win tomorrow night’s clash as much as Arsenal do but that won’t stop Antonio Conte from trying.

Arsenal beat Chelsea 3-0 in September when the Blues traveled to the Emirates stadium but this side looks completely different from the one that Arsenal thrashed. Antonio Conte changed things up soon after that and Chelsea have looked unstoppable ever since.

Antonio Conte, Manager of Chelsea (L) and Arsene Wenger, Manager of Arsenal (R) shake hands after the final whistle during the Premier League match between Arsenal and Chelsea at the Emirates Stadium on September 24, 2016 in London, England. (Photo courtesy Paul Gilham/Getty Images)

Both Arsenal and Chelsea have lost 1 game, drawn 1 game and won 3 of their last 5 Premier League fixtures, although Chelsea played and lost to Tottenham and also drew with Liverpool in those run of fixtures.

Arsenal on the other hand are coming off the back of a crushing 2-1 defeat to Watford in one of the surprise results of the season. Wenger’s side have also had to rely on an astonishing comeback against Bournemouth and a late penalty against Burnley to ensure they haven’t dropped more points.

This will be an absolutely crucial fixture for Arsenal for whom only a win will do following their defeat in midweek, while Chelsea can make do with a draw given that they currently have a 9 point lead at the top of the table.

Should Arsenal win, that lead will reduce to 6 points and suddenly Chelsea will suddenly look catchable. Lose the match, however, and only the most optimistic Arsenal fan will think that Arsene Wenger’s side will still have a chance at the title.

Willian and David Luiz are the biggest doubts for Chelsea going into Saturday’s game with Arsenal as both players picked up knocks in Tuesday’s match at Anfield. Luiz, who was man of the match against Liverpool, spoke about having troubles with his right knee and has been unable to train every day.

However, it seems likely that Luiz will start given the magnitude of this fixture and Conte did not mention anything about Willian missing out in his pre-match notes. Beyond that, Antonio Conte’s luck with injuries continues and Chelsea have every other player available tomorrow.

Should Conte decide not to risk Willian, Pedro is the favourite to start instead of him. Besides that, there shouldn’t be any other surprises in the starting line-up that has worked wonders for Cnte this season. 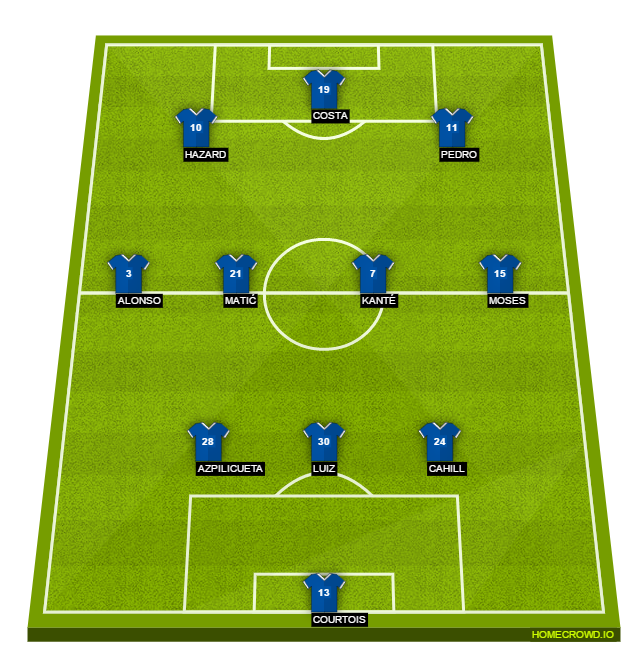 Arsenal are now firmly in an injury crisis in midfield. Arsene Wenger confirmed that Aaron Ramsey will miss 3 weeks with a calf strain while Alex Oxlade-Chamberlain also faces a late test but could still feature.

Santi Cazorla remains sidelined with no return date known as yet while Granit Xhaka is still suspended for Arsenal. Mohamed Elneny is on duty with Egypt at the African Cup of Nations and this leaves Arsenal very light in central midfield. Speaking ahead of the game, Arsene Wenger had this to say about Arsenal’s squad.

“Well, overall from the other night I think we lose Ramsey, and Giroud has a test. Giroud should be alright. I would say 21 days (until Ramsey returns). Maybe Welbeck will come back into the group and that’s basically it. Chamberlain has a test today [Friday] as well but I think he will be alright,” he said, according to the club’s official website.

Wenger seemed confident that both Olivier Giroud and Oxlade-Chamberlain would be fit, which means that the Englishman will slot into the central midfield position with Coquelin. It remains to be seen if Olivier Giroud will start given the drastic change in performance once he was substituted against Watford, but Wenger has opted to use the towering Frenchman for the past few games.

It seems likely that Hector Bellerin will start given the criticism Gabriel got after Arsenal’s loss to Watford. Arsene Wenger defended the Brazilian after the game and said he did not want to risk Bellerin but it seems likely that Wenger will use the Spaniard given the nature of this fixture.

Arsenal will have to be at their best against this Chelsea side and Arsene Wenger will have made sure they don’t make a slow start once more, something they have been prone to over the last few fixtures. The Gunners will look to play their usual game against Chelsea but will likely be a lot more wary given their fragility currently. 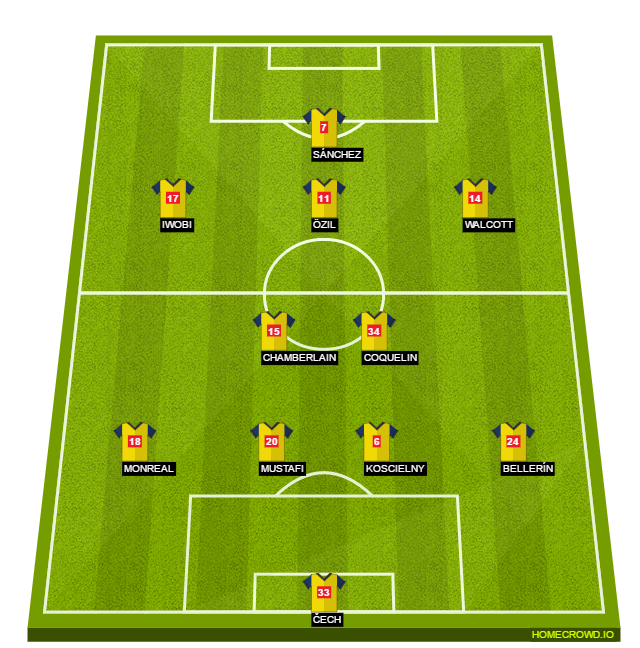 Antonio Conte’s men are simply too disciplined now to make the mistakes they did in the previous fixture and with the home advantage are undisputed favourites going into this tie. Chelsea are not only disciplined, but also have enough quality in their side to punish an Arsenal side that will be low on confidence after their defeat in midweek.

However, it may not be as easy as many think it will given the Gunners’ need to prove a point but it is still likely that Chelsea will emerge the victors tomorrow night and Arsenal’s title hopes will be all-but ended.