For all the glamour and glitz surrounding Chelsea’s visit to Anfield on Tuesday, Liverpool’s recent form pits the Blues as overwhelming favourites to possibly put the title race to rest with a victory over Jurgen Klopp’s side.

“A Champions League place would be nice,” opined Jurgen Klopp in his side’s pre-match presser ahead of their showdown against Chelsea.

From issuing a rallying cry for the Premier League title little over a month ago after the victory over Manchester City, Klopp has been reduced to settling for a Champions League place going into the game against Antonio Conte’s Blues.

The Reds sit 4th with only two points separating them and 2nd placed Arsenal with Spurs sitting a point ahead in 3rd spot.

It, however, throws light on the morale at Anfield at the moment after a gruesome week that saw them eliminated out of two cup competitions and lose three consecutive games at a perceived “fortress” in the space of the last seven days.

The ‘crisis’ at Liverpool couldn’t come at a better time for Chelsea who were dealt a lesson by the Reds back in September at Stamford Bridge when they effected a spirited 2-1 victory courtesy of goals from Dejan Lovren and a stunner from Jordan Henderson.

However, much has changed since then. Conte has made himself and Chelsea a force to be reckoned with in the Premier League. Aided by a 13-match winning run his side are comfortably placed at the top of the table with a 10-point lead over Liverpool.

There have been calls for Klopp to alter the ill-functioning 4-3-3 system for probably a 4-4-2 (diamond) that may work well in favour of the likes of Daniel Sturridge and Divock Origi, both of whom have struggled to effect their usual impact in recent weeks.

But that is too heavy a tactical decision to make just three days after a loss to Wolverhampton Wanderers at the FA Cup and the German can best use the international break should he choose to reflect upon it.

That said, there are still three matches to go before that break comes along, all of which could have a crucial say in Liverpool’s top 4 credentials. So Klopp will look to milk every last ounce of inspiration out of his player’s ahead of Tuesday’s massive tie.

Adam Lallana is set to feature after there were concerns regarding the midfielder’s fitness following his outing against Southampton in the League Cup semi-final loss last week.

Fellow Saints product Nathaniel Clyne is however ruled out of the tie after failing to return to training at Melwood in time.

And with Klopp not keen on taking a risk with his reliable right-back, he’s expected to stay out of the tie against Chelsea. Trent Alexander-Arnold, who was rested in favour of Conor Randall for the Wolves game, is set to take his place.

Roberto Firmino, who was charged with a case of drunk driving on 26th December, was scheduled to have a hearing on Tuesday but having had it pushed back, he will be involved for Liverpool against the Blues.

The million-dollar question, however, remains with regard to the participation of Sadio Mane. The Senegalese forward was due to return to Merseyside on Monday after his team were eliminated from the African Cup of Nations.

Aside the lack of preparation time, Mane’s state of mind is also something Klopp will have to factor in before having him involved against Chelsea given how the forward’s penalty miss proved to be the decisive moment in the quarter-final loss against Cameroon. 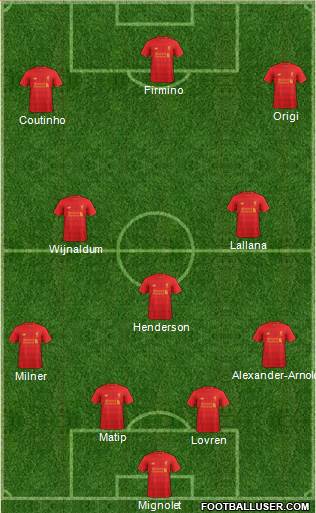 Chelsea are to revert to their first-choice line-up for Tuesday night’s Premier League clash with Liverpool. Head coach Antonio Conte made nine changes for last weekend’s FA Cup win over Brentford and has no injury doubts for the trip to Anfield.

Goalkeeper Asmir Begovic and defender Branislav Ivanovic, who have both been linked with moves, may be late omissions from the squad if they leave ahead of Tuesday night’s transfer deadline.

Since suffering the double blow against Liverpool and Arsenal in the space of a week in September, Conte’s Chelsea have been in a formidable run of form and barring the 2-0 loss to Tottenham Hotspur on New Year’s Day, they have rarely looked out of their element.

The Italian won’t tinker with the winning formula too much and is expected to retain his core crop of players from the 3-4-3 formation.

Probably the only other moment of trouble Chelsea have endured in the past few months would be the future of Diego Costa.

The Brazilian-born Spanish international has been key to the Blues’ recovery this season with 15 goals to show for, and thoughts of losing the Spain international could have damaged the club’s title aspirations.

The player is likely to start at Anfield, and with Liverpool’s defence in dire straits, the Chelsea hitman will fill his boots.

Back to his best – Eden Hazard has re-established himself as Chelsea’s talisman this season. (Photo courtesy – Paul Ellis/AFP/Getty Images)

Eden Hazard almost always turns up for an encounter against the Merseysiders and given the form he has been in this season, you wouldn’t expect him to miss the chance of taking the spot-light on Tuesday.

Nathan Ake impressed at left wing-back, but the young defender should make way for the return of Marcos Alonso. Conte will have a tough decision to make on whether Willian or Pedro complete the front three with Costa and Hazard given their fine recent form.

Cesc Fabregas has also been impressive of late, though Conte is expected to revert to a more defensive midfield duo of N’Golo Kante and Nemanja Matic.

Gary Cahill is likely to return after being rested in the cup after a clash of heads with Ryan Mason the previous week, which left the Hull player with a fractured skull. 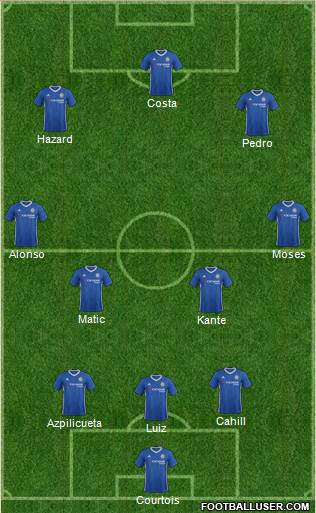 He hasn’t enjoyed a great deal of success in this fixture but Firmino back in his favoured role of centre-forward should be Liverpool’s best chance till probably Sadio Mane takes to the pitch later on in the game. The Brazilian forward’s brace last week against Swansea helped Klopp’s side equalize from 2-0 down.

His work rate will come in handy up top and there will be a dire need for the striker to come up with the goods on Tuesday if Liverpool are to get anywhere close to repeating their exploits from last September.

This game has ‘midfield battle’ written all over it and although the likes of Henderson, Wijnaldum, Kante and Matic are expected to be at the forefront of the action, the strikers will prove to be crucial too.

Should the game prove to be as tight as expected, chances will be hard to come by and the forwards will have to take what comes their way and if this season is anything to go by Costa has been doing his part with aplomb. The Spaniard has been constantly among the goals with 15 strikes to his name and there’s no doubt Conte will pin his hopes on the striker once again to deliver at Anfield.

There’s no sugar-coating how shambolic Liverpool have been in recent weeks. The opposition have found a way to counter Liverpool’s style of play and although the Reds seem to dominate in possession, they have struggled to translate that into meaningful goal-scoring opportunities.

Their defensive troubles not-withstanding, Liverpool could ill-afford a crisis in attack. They will hope Sadio Mane’s arrival changes a bit of that.

It’s all hale and hearty for Chelsea on the other end and with the Blues on a high following their league loss early on in the year, it’d be fair to lay a punt on them comfortably taking the spoils at Anfield.