The roles have reversed this season, and how. Champions Leicester City have struggled in the defence of their title and currently languish in 15th place with just a paltry tally of 21 points.

On the other hand, Chelsea have bounced back strongly after a dismal Premier League title defence of their own last season. Antonio Conte has taken the Premier League by storm and led the Blues to the summit of English football, and they currently lead Liverpool by 5 points at the top of the table.

The Italian’s side comes into this game on the back of a thumping 4-1 win over Peterborough United in the 3rd round of the FA Cup. The hosts also enter this match on the back of a victory, as they beat Everton 2-1 at Goodison Park in the cup competition.

The reverse tie ended in a resounding 3-0 win for Chelsea, and Hard Tackle takes a closer look at what promises to be an intriguing second meeting between the two sides.

The biggest news for The Foxes is that Claudio Ranieri Jamie Vardy available again after serving his 3-match suspension, and the England striker should slot right back into the lineup to lead the Leicester frontline.

However, Ranieri has a few absentees as well, with Daniel Amartey (Ghana), Riyad Mahrez and Islam Slimani (both Algeria) all away on national duty at the Africa Cup of Nations, while Leonardo Ulloa’s involvement is in doubt due to a thigh strain.

Jeffrey Schlupp will not feature after having been told that he’s free to talk to other clubs, but Andy King could feature after overcoming a bout of illness.

Ahmed Musa is expected to start as well, after grabbing a brace in the FA Cup win last week, and he will be charged with giving the Chelsea defence a hard time, with his clever change of pace and trickery. New signing Wilfred Ndidi is expected to get a few minutes of action under his belt as well. 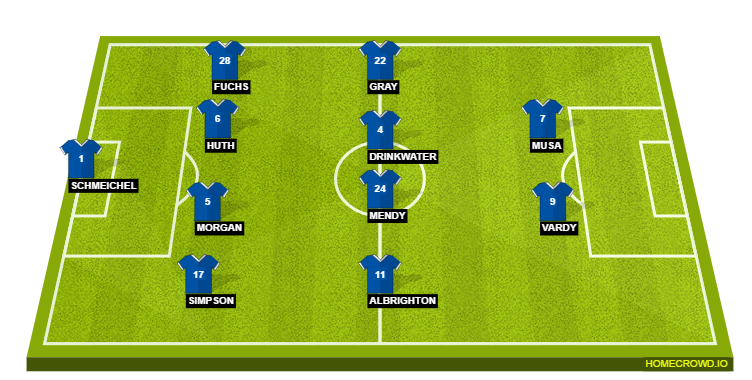 Antonio Conte has no pressing injury concerns on his hands, with John Terry the only absentee due to suspension, after the club captain was sent off in the win over Peterborough last week. Marcos Alonso (muscle) is doubtful but the wing-back is expected to start on Saturday evening.

Nathan Ake was recalled from his loan at Bournemouth earlier this week, and the young defender is likely to make the squad on his comeback to the club. In the unlikely instance of Alonso not being fit enough to start, the Dutchman will be available to fill in and make an impression on his boss.

The match will also see N’Golo Kante returning to his former club, and the Frenchman is expected to have Cesc Fabregas for company, with the Spaniard responsible for providing the burst of creativity through the centre for Chelsea.

Pedro, who grabbed a brace in last weekend’s cup game should start too, alongside Eden Hazard and Diego Costa, who has been Chelsea’s talisman this season. The trio will look to put the ageing Leicester defence under pressure and get their scoring boots back on, after blanking last week against Spurs. 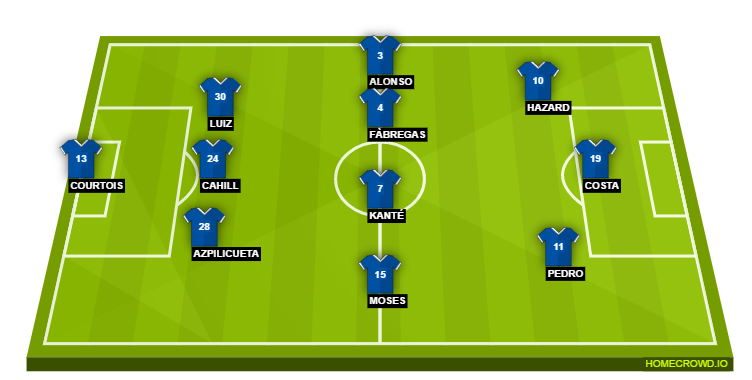 From the highs of last season to the struggles of this, Jamie Vardy looks a pale shadow of the player who took Premier League by storm in 2015/16. (Photo courtesy – Michael Regan/Getty Images)

Jamie Vardy enjoyed the best 12 months of his life as, along with Riyad Mahrez, he led Leicester City to an unlikely Premier League title trophy, ending second on the top scorers chart with 24 goals. He also broke Ruud van Nistelrooy’s record as he became the first player to score in 11 consecutive Premier League matches, when he netted against Manchester United.

This season, however, Vardy has looked a pale shadow of himself, and much like Leicester’s underwhelming defence of their title, the England international has struggled to match the highs of the previous campaign, and has only scored five goals for the Foxes in the Premier League.

However, he has shown glimpses of his top form from last season, which was particularly on show against Manchester City as he scored a hat-trick to lead Leicester to a confidence boosting 4-2 win over Pep Guardiola’s side.

As Vardy comes back into the side after serving his three-match suspension, Leicester will need him to produce more of the same again on Saturday if they are to harbour any hopes from the match.

It has been raining goals for Diego Costa this season, and his will need to rise up for the Blues once again on Saturday. (Photo courtesy – Ian Kington/AFP/Getty Images)

His influence this season is undeniable, and match winning goals against Watford, Middlesbrough, West Bromwich Albion and Crystal Palace are testament to his impact for the Blues.

The Spain international failed to make an impact against Tottenham Hotspur last week, but as Chelsea look to get back to winning ways on Saturday, it will be Costa who will need to rise up and make himself count against Premier League’s reigning champions.

It hasn’t been an easy ride for Claudio Ranieri’s side this season, and Antonio Conte’s Chelsea is as tough as it gets at the King Power Stadium for Leicester City. They will need to be at their very best to catch the visitors off their guard and cause dents in their chase for the Premier League title.

Chelsea, on the other hand, suddenly look slightly susceptible at the back after conceding four goals in their last two league games. They are looking to regain momentum and maintain the gap on their rivals and Conte will need his attacker to be back to their best in order to get back to winning ways.

Expect this match to be much closer than the reverse tie back in October, when Chelsea romped home to a comfortable victory over The Foxes. We predict Chelsea to nick it by the odd goal on Saturday.