Coming off the back of two consecutive league victories, Manchester United will be gunning for a third win in a bid to keep pace with the top four sides

Things are beginning to look sunny side up at Manchester United, with the Red Devils accruing some crucial points in the Premier League in recent weeks alongside securing progress through to the knockout rounds in the Europa League and the semi-final of the EFL Cup.

There are growing pieces of evidence of the attacking flair reminiscent of the all-conquering United teams under Sir Alex Ferguson, although there is still much room for improvement.

The goals are slowly but steadily beginning to flow for the Red Devils and they will hope it’ll continue to click against a West Brom side who have been uncharacteristically good going forward themselves.

The Baggies under Tony Pulis’ management have largely earned a reputation for being a boring side with limited attacking creativity and primarily designed to shut out opposition teams in their tracks. This season, however, there seems to be a welcome sense of excitement to their style of play.

Tony Pulis has always shared an innate satisfaction in upsetting the higher establishments in the Premier League, and over the years has managed to scalp a number of gritty victories against many of the top sides in the English top-flight.

Saturday provides the experienced boss with yet another opportunity to do exactly that and he will largely rely on Venezuelan hitman Salomon Rondon to deliver the goods.

West Brom have been flying high this season, sitting in 7th spot and only 4 points behind Manchester United. The Baggies have scored more goals than the Red Devils this season in the league, and while that may not necessarily dictate what we can come to expect at the Hawthorns, it certainly issues Mourinho’s side a sufficient warning that they are not going to be pushovers.

The Baggies won this fixture last season courtesy of a second-half Rondon strike and a similar result would leave the Midlanders just a point below the Top 6 places. Since leaving Manchester United, Jonny Evans has gone on and established himself as a key figure in the Albion back-line and Pulis has sorely missed the Northern Irishman during his injury lay-offs this season.

The boss faces yet another agonizing wait over the player’s fitness, with Evans yet to recover from the calf-strain that ruled him out from the 3-1 midweek win over Swansea.

Craig Dawson is available once again after serving his one-match suspension for collating five bookings. Nacer Chadli will be the focal point of West Brom’s attacks going forward, and along with Chris Brunt and Matt Phillips will be tasked with providing Rondon with the adequate service to hurt United.

Chances aren’t going to come in easy for the Baggies against a United side that keep possession. Hence, they will have to resort to sitting back and defending in numbers and attack on the counter. The tactic hasn’t worked all too well for Pulis’ side this season against the big sides, where they have failed to notch a win against any of the sides placed above them at the moment.

Evidenced by their home form this season, West Brom must have a go at Manchester United and look to attack them early on in the game before they decide to sit back and look to compress the Red Devils’ attacks. With more fluidity to their attacking ventures, Pulis has what it takes in his ranks to hurt United and given their current placing in the league, he will go for the full monty. 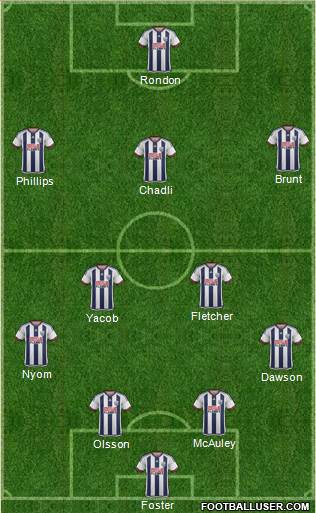 With the top four teams dropping points in recent weeks, Mourinho’s team have well and truly capitalized in a bid to bridge the gap between the them.

A result at the Hawthorns on Saturday will aid them further with the likes of Manchester City, Arsenal, Liverpool and Everton all facing each other. The Red Devils will be without Henrikh Mkhitaryan for the remainder of 2016 after the midfielder suffered an unfortunate injury during his side’s 1-0 victory last week against Tottenham.

Eric Bailly returned to action last week but after suffering a fresh knee injury, he is out of action against West Brom. Chris Smalling and Antonio Valencia return to the squad for the visit to the Midlands after being rested for the Crystal Palace game.

The Red Devils have looked more glowing and purposeful in attack with the emergence to form of Paul Pogba and Zlatan Ibrahimovic’s sharpness in front of goal.

The £89 million summer acquisition is beginning to look the part in recent weeks, consistently turning up with good performances. He has a tally of 5 goals and 3 assists to show for in 22 games this season.

With 14 goals out of 24 appearances Ibra continues to remain the key output of goals for United in attack. The Swedish striker’s league tally alone has earned accounted for 8 points this campaign for the Red Devils and that goes some way in emphasizing how important a member he is in Mourinho’s set-up, even at the age of 35.

Manchester United are expected to stick to their possession based approach that enables them to create a lot of chances for their forwards. The major problem in recent weeks has been the conversion of these opportunities.

The Reds seem to dominate games but can’t seem to show it on the scoreboard and that is something the bunch of attackers must keep in mind. In the usual 4-2-3-1 set-up, Michael Carrick will assume the anchoring role in centre-midfield along with Ander Herrera.

The Old Trafford giants haven’t lost a single game that Carrick has been a part of this season, and a significant portion of that credit goes to the Englishman for doing the dirty work and taking control of the centre of the park. 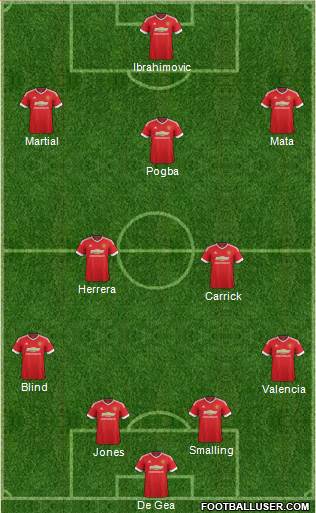 All hopes of an upset will be pinned on this man. Coming at the back of a hat-trick during his side’s 3-1 midweek win over Swansea City, Rondon has been well among the goals this campaign and his aerial prowess will come in handy for West Brom.

West Brom will be looking to sit back and shut out United’s attacking ventures. It’ll take a moment of magic to conjure a goal-scoring opportunity, and Pogba is most certainly capable of that.

He marked his previous outing against Palace with an assist and a goal, and he will definitely be in the thick of the action on Saturday as well. The Baggies defence led by Gareth McAuley will have a task on their hands trying to contain the 23-year-old.

Granted Pulis shares a penchant for the occasional upset, but despite his side’s flair it is Manchester United’s money power that could dictate this encounter. The sheer quality of the players in their squad is enough to tip the pendulum in the Red Devils’ favour, but given how close their recent fixtures have panned out, we can expect a rather interesting encounter at the Hawthorns.