The games are coming thick and fast in the busy festive period leading up to the New Year fixtures. As we enter Gameweek 17, three days after the culmination of the last round round of matches, there are serious title implications depending on the outcome of the fixture when Pep Guardiola’s Manchester City and Arsene Wenger’s Arsenal meet on the weekend.

The hosts Manchester City come into this game on the back of a confidence boosting 2-0 win over Walter Mazzarri’s Watford at the Etihad Stadium, thanks to goals from Pablo Zabaleta and David Silva. That result was their first home win in nearly three months and followed a run of inconsistent results, in a period when the Citizens won just two of their five league games.

City’s visitors Arsenal, on the other hand, lost a one-goal advantage in the dying stages of their match at Goodison Park to go down 2-1 to Everton. The loss resulted in their 15-match unbeaten streak come to an end and saw the Gunners lose ground on league leaders Chelsea.

The good feeling at the Etihad Stadium has dissipated somewhat, with Manchester City’s floundering displays halting all the early season momentum. After winning their first ten games at the start of the campaign, Pep Guardiola’s side have won just five of their 16 subsequent games.

As Arsenal come visiting on Sunday, anything but a win will see City lose further momentum in their chase for the title.

Pep Guardiola doesn’t have a lot of good news coming his way in the form of team news either, with key figures missing the match on Sunday. The worst piece of news is the knee injury sustained by midfielder Ilkay Gundogan after the Germany international collided with Watford forward Nordin Amrabat on Wednesday night.

The latest communication on his injury is not good as Gundogan is set to miss the majority of the remainder of the season. Captain Vincent Kompany, too, remains out with a knee injury, while midfielder Fabian Delph is still some way off regaining match fitness post a groin operation.

Midfielder Fernandinho (one game) and star striker Sergio Aguero (two games) are unavailable due to suspension.

In the absence of Fernandinho and Gundogan, Fernando and Yaya Toure are expected to take their places at the base of the Manchester City midfield. Ahead of them, influential attacking midfielders Kevin De Bruyne and David Silva are likely to start.

However, Guardiola faces a crunch decision to fill up the other two attacking places, with the likes of Leroy Sane, Raheem Sterling, Nolito and Kelechi Iheanacho all staking claim for a starting berth. 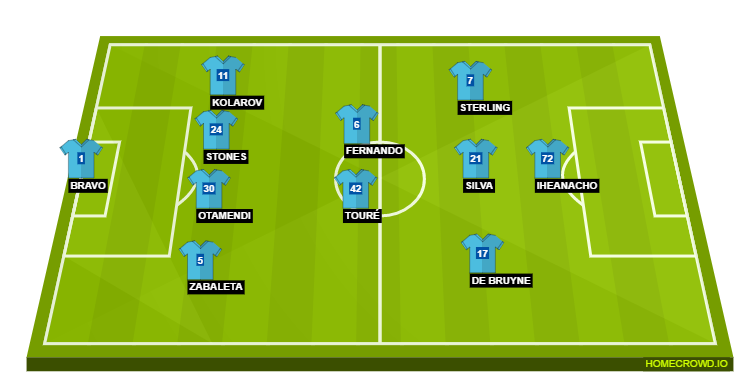 Arsenal have been much more consistent that City this season, yet they still lie just a point ahead of their hosts heading into Sunday’s clash at the Etihad Stadium, after their 15-match league unbeaten streak came to a grinding halt at Goodison Park. Ahead of the crunch clash on the weekend, Arsene Wenger will be eager to see his side get back to winning ways and keep up with Chelsea.

On the team news front, Wenger doesn’t have any fresh injury concerns on his hands, and heads to Manchester with pretty much the same squad that visited Merseyside on Tuesday. Shkodran Mustafi is likely to miss the remainder of 2016 with the hamstring injury he sustained in the 3-1 win over Stoke City last weekend.

LONDON, ENGLAND – DECEMBER 10: Shkodran Mustafi of Arsenal speaks to a member of the Arsenal medical team after going down injured during the Premier League match between Arsenal and Stoke City at the Emirates Stadium on December 10, 2016 in London, England. (Photo courtesy Julian Finney/Getty Images)

Aaron Ramsey (hamstring) is a week away from returning to first-team training, whereas Danny Welbeck (knee) himself is expected to resume full training next week. The likes of Mathieu Debuchy (hamstring), Per Mertesacker (knee) and Santi Cazorla (achilles) are all sidelined with mid-to-long term injuries.

On matters of team selection, the Arsenal boss faces a relatively straightforward task of picking his starting lineup, with a back four of Hector Bellerin, Gabriel, Laurent Koscielny and Nacho Monreal providing defensive cover to Petr Cech in goal. Ahead of them, Granit Xhaka and Francis Coquelin are likely to start in the midfield pivot.

In attack, Alexis Sanchez has been deadly in front of goal, scoring 12 goals so far this season. As the Chilean spearheads the attack, Olivier Giroud and Lucas Perez should continue to remain on the bench. Behind Sanchez, Mesut Ozil and Theo Walcott have nailed on their starting spots, while Alex Iwobi could start on the left flank for Arsenal. 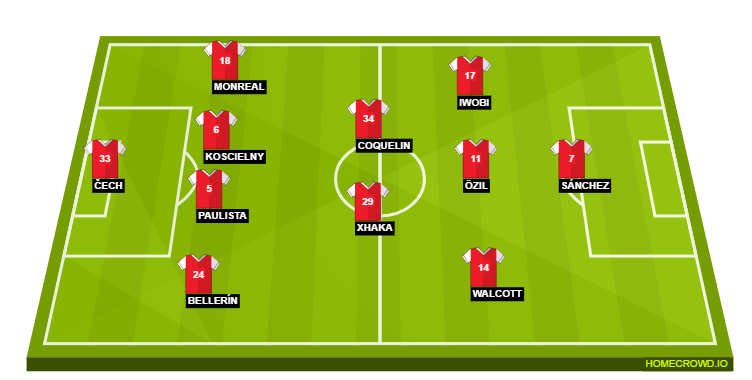 To say that the start to life at the Etihad Stadium has been underwhelming would be a gross understatement of John Stones’ inconsistencies for Manchester City. Signed on a big money move from Everton in the summer, much was expected of England international Stones, but has struggled to provide the solidity in the heart of the City defence.

He has been frustratingly erratic at the back for Manchester City, with one strong performances being followed by a few poor outings, as was highlighted by his disastrous performance against Leicester City last weekend. With Arsenal visiting on Sunday, Stones is set for another trial by fire as the likes of Sanchez, Ozil and Walcott look to heap on his misery.

Alexis Sanchez has dominated the headlines for larger parts of this season, but Ozil’s impact for the Gunners can’t be understated. The assists may have dried up slightly, but the Germany international has been heavily involved in Arsenal’s attacking forays, and has also chipped in with vital goals for his side.

Against Everton, fatigue set in for Ozil and he struggled to create much impact through the course of the game, however he will need to stand up and be counted with his quick distribution of the ball against a City defence that has been highly susceptible to quick counter attacks.

The pressure is on both Pep Guardiola and Arsene Wenger, with both managers eager to not lose any further ground on Premier League leaders Chelsea. With this being such a crunch fixture, a winless result could see City and Arsenal fall 10 and 9 points behind the West Londoners.

City’s defensive frailties are all too well known and the pacy outlets in Alexis Sanchez, Theo Walcott and Alex Iwobi will be keen to create the pressure on their hosts’ backline. On the other hand, with Shkodran Mustafi sidelined, Arsenal themselves could be susceptible to defensive lapses.

Expect this to be another exciting match filled with goals, with both sides eager for a crucial win in their title charge. We predict an odd-goal win for Arsenal.