Red hot Chelsea travel to the Stadium of Light to face bottom-placed Sunderland on Wednesday, in search of a 10th Premier League win in a row and looking to maintain their lead on top of the table.

We’re right in the middle of December and games are coming thick and fast. Gameweek 15 ended on Sunday night with the fiercely contested 2-2 draw between Liverpool and West Ham United, and we’re already into Matchday 16. Wednesday night’s match is a battle of the unequals as the formidable table toppers Chelsea look to extend their winning run at Sunderland who sit dead last.

David Moyes’ Sunderland had to wait for more than two months to register their first league win in the 2016/17 season, but have now won three of their last five games to make the relegation dogfight a tantalisingly close battle. While the Black Cats are still rooted to the bottom of the table, their recent form will give them cause to be slightly optimistic about somewhat troubling the high flying league leaders.

The visitors, on the other hand, just can’t stop winning at the moment. Ever since the humiliating 3-0 loss at the hands of Arsenal, Antonio Conte’s men haven’t looked back, notching up nine wins on the trot. They have largely looked imperious in most games but have also shown that they can graft their way through games when needed, as shown by their 1-0 win over West Bromwich Albion on Sunday.

Sunderland come into this match on the back of a disappointing 3-0 loss at Swansea City that saw them slip back to the bottom of the table. Wednesday night’s match could see them drift further away from safety as a daunting task against the league leaders beckons.

Injury troubles have hurt Sunderland massively this season, as key figures have been sidelined with long-term issues. Against Chelsea, David Moyes will continue to be without the likes of defender Paddy McNair (knee), midfielders Lee Cattermole (hip) and Jack Rodwell (hamstring), and forwards Fabio Borini (groin) and Duncan Watmore (knee).

On top of that, influential midfielder Didier Ndong is unavailable too as the Gabonese international servers a one-match ban after accumulating five bookings so far. In Ndong’s stead, Jan Kirchhoff could start a first game in over two months, having appeared two times off the bench since recovering from a hamstring injury.

Kirchhoff will be partnered by Jason Denayer, and they will sit in a back four of Billy Jones, Lamine Kone, Papy Djilobodji and Patrick van Aanholt. The duo are likely to be flanked by Sebastian Larsson and Steven Pienaar, with Jermaine Defoe and Victor Anichebe looking to pose a threat to the Chelsea defence, with power and guile.

There’s no stopping Chelsea right now, as they continue to win and win and win. Tony Pulis’ resilient West Brom held on impressively for large parts of the match on Sunday, frustrating the Chelsea attackers with their solid defensive output.

However, it was one moment of brilliance from Diego Costa who hustled the ball off Gareth McAuley on the right byline and scored past Ben Foster to notch up his twelfth goal of the season and get the all-important three points for his side.

On the team news front, manager Antonio Conte has no fresh injury concerns and has all his first team regulars available for the visit to the Stadium of Light. Oscar remains doubtful due to a virus, but club captain John Terry has a late fitness test and could be available for the first time in over a month for the Blues.

Nemanja Matic returned to the starting lineup against West Brom after missing out in the 3-1 win over Manchester City two weeks ago. With Matic’s return, the Chelsea boss is expected to continue with the same lineup that has played together for the majority of the nine match winning run since the start of October. 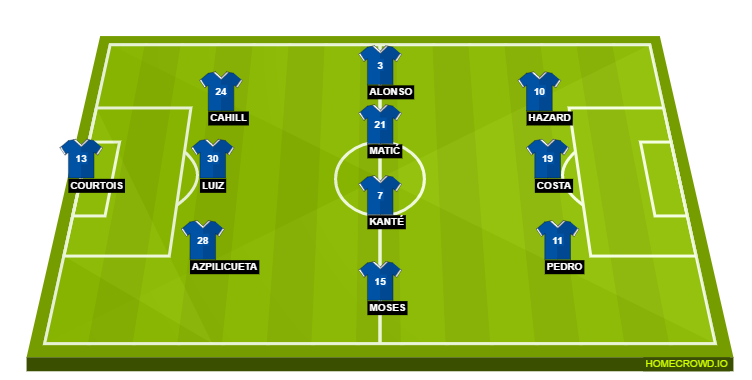 Diego Costa and Eden Hazard will look to lead Chelsea to a tenth win on the bounce on Wednesday. (Photo by Ian Walton/Getty Images)

Sunderland’s form has improved in the last few weeks, with three wins in their last five outings after going winless in their first ten games. One of their two losses in this recent run saw them valiantly deny high scoring Liverpool before going down 2-0 in the dying stages of the match at Anfield.

Chelsea, however, are the team to beat right now, looking extremely solid at the back and threatening going forward. Diego Costa and Eden Hazard are being supported ably pursuit of goals by the likes of Victor Moses and Pedro, while N’Golo Kante and Nemanja Matic have help shore up the defence in front of Cesar Azpilicueta, David Luiz and Gary Cahill.

With Chelsea finding one way or another to get past their opponents, anything but victory for Antonio Conte’s men looks unlikely. This could be a long night for David Moyes and his charges as the unstoppable Chelsea come visiting to the North East.