A reaction to last week’s catastrophic capitulation at Bournemouth is in order for Jurgen Klopp’s Liverpool who entertain West Ham United on Sunday, a side they haven’t beaten in the league since the 2014-15 season.

Prior to last week’s game at the Vitality Stadium against Bournemouth, Liverpool hadn’t suffered a loss since their shocking 2-0 result against Burnley early on in the season. And given how his side recovered from the disappointment at Turf Moor, Jurgen Klopp will be expecting significantly more from this Reds line-up going into the West Ham United clash at Anfield on Sunday.

The Hammers are struggling in the Premier League and have dropped into the relegation zone after Swansea City’s 3-0 win over Sunderland on Saturday. However, Klopp’s side will exercise caution knowing how they were completely outclassed by the Slaven Bilic-led outfit on both occasions last season. Four points off the pace at the top of the table, the boss will be glad if his side can avenge last season’s disappointment with a victory on Sunday that helps them keep up with Chelsea and Arsenal.

Barring the returns of Joel Matip and Adam Lallana, there are no other early Christmas surprises yet for Liverpool on the injury front with Daniel Sturridge yet to return to training and Philippe Coutinho still ruled out till the end of the year. Sadio Mane limped off the field last week at the Vitality Stadium but has returned to fitness and is ready for selection ahead of the West Ham game.

Joe Gomez has been in action recently for the U-23s since returning from a lengthy injury lay-off but he isn’t expected near the first-team set-up just yet. Loris Karius endured a torrid time in goal against Bournemouth and with criticism coming all around since then, he’ll be under pressure to deliver a top notch performance against the Hammers at Anfield on Sunday.

LIVERPOOL, ENGLAND – OCTOBER 22: Loris Karius, goalkeeper of Liverpool looks on during the Premier League match between Liverpool and West Bromwich Albion at Anfield on October 22, 2016 in Liverpool, England. (Photo by Jan Kruger/Getty Images)

While occasionally drifting to a 4-2-3-1, Liverpool have stuck to the 4-3-3 formation so far this season. Last Saturday’s loss probably may indicate a need for Klopp to identify an alternative formation, especially in the absence of players of the quality of Coutinho and Sturridge. Defence will be a major talking point from last week’s shocking result where the Reds let slip a 3-1 lead to eventually lose 4-3 to Eddie Howe’s Bournemouth.

And that back-line will prove to be that much more crucial on Sunday being aware of the physicality and aerial prowess of a number of the West Ham players. The likes of Andy Carroll and Michail Antonio will test the defensive resilience of the Matip-Lovren partnership at the back. The Reds will take comfort from the fact that they have never lost a game that their Cameroonian defender has taken part in, but it stops there. There is enough quality in both the sides and going into Anfield on Sunday, the two teams differ only in their mentality. An early goal could be massive as far as setting the pace for the game is concerned. 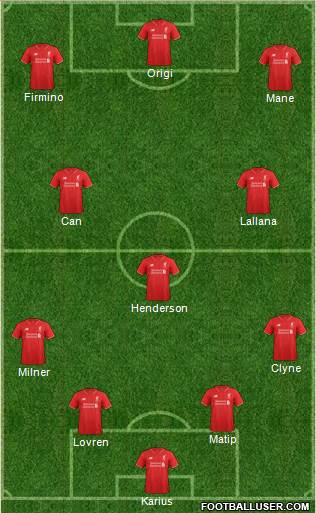 It’s not looking pretty for Slaven Bilic & co. They kick-started their season with so much promise with a new stadium, a dollop of new faces, potential European football only for it to all to turn upside down within the first few weeks of the 2016-17 campaign. The Hammers failed to even make it to the group stage of the Europa League, faltering at the qualification itself, before setting themselves up for a horrific run of league form that saw them pick up just a point in 7 league games.

With just two points from their last 5 league games to add to an ouster from the EFL Cup, last season is fast looking like a distant memory for West Ham United supporters. While many have slammed the move to the London Stadium on moral and economic counts, that doesn’t shield the fact that there are fundamental issues to be dealt with on the pitch for Slaven Bilic.

The side seem to lack intensity, morale and the fight that defined them last season and will need to find the motivation and drive to bring that out in front of a boisterous Anfield crowd. It’s not a completely unfamiliar scenario for the Hammers who came here last season and dished out a 3-0 thrashing to a then Brendan Rodgers-led Liverpool to compound the misery on the boss who eventually paved way for Klopp. It’d be harsh to say Dimitri Payet isn’t putting in a shift but in terms of output even he hasn’t delivered as well as he did last season when he scored 9 goals and assisted 12 others.

West Ham are bolstered by the return of Aaron Cresswell and Michail Antonio who were each sidelined due to a groin strain. Cheikhou Kouyate, however, remains a key absence and is expected to be replaced by Pedro Obian, with the Spaniard partnering Mark Noble in centre-midfield. Bilic has predominantly gone with a 3-4-3 formation this campaign with Winston Reid, Angelo Ogbonna and Alvaro Arbeloa expected to form the back-three. Andy Carroll could feature against his former side and will look to score in front of the Anfield crowd for the first time since his permanent departure from the club in 2013. 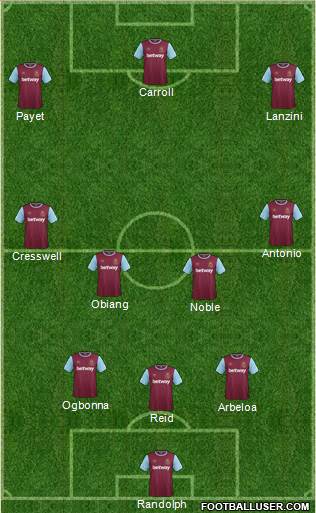 Players to watch out

The midfielder returned to action against Bournemouth last week in what will be a forgettable second half for Liverpool. The England international has been in spectacular form this season and has time again shown what the Reds are missing in the centre of the park. His tireless runs and pressure will be key to inducing goal-scoring opportunities for Liverpool on the night.

The former Liverpool striker will be a target-man up-top for the Hammers. His physique and aerial prowess can be used to utilize the Reds’ defensive frailties to their advantage. With the service of Payet and Lanzini from the wings Carroll will certainly look to score in-front of Anfield for the first-time since his departure. He will be a key figure in a potential Hammers’ resurgence, if there ever is one.

Given the nature of the on-going match week, even a 3-1 scoreline looks average at best and knowing that Liverpool are involved we can expect a lot of goals on either end of the park. Klopp’s side will come out with a point to prove after last week’s loss while West Ham will be out for a source of inspiration to re-ignite a season that is fast moving towards a train-wreck. That said, the Reds, blessed with flair and attacking quality should outperform a depleted Hammers’ outfit, but stranger things have happened in the Premier League.