We take a look at the key stories surrounding Real Madrid from yesterday.

Zidane says James Rodriguez will not be sold in January

Rodriguez has only made one start for Real this season, against Sporting Gijon, and it was his first in seven consecutive games. This term, he has only played more minutes than third-choice keeper Rubén Yáñez, young striker Mariano Díaz, second choice left-back Fabio Coentrao and midfielder Casemiro, who has only just returned after a nearly ten-week absence due to an injury.

Rodriguez has clearly found it difficult to break into the first team and has been linked with moves away from Real on several occasions this season, with Manchester United and Juventus both linked with moves for the Colombian international.

However, Zidane has confirmed that James is still in his plans and that he will not allow the Colombian midfielder to leave in January. Speaking ahead of the Deportivo game, Zidane said:

“James is not going to leave here for sure, I do not want him to leave,” he said, according to Marca.

“To know if he will be in the eleven (for Depor), you have to wait.”

Over the weekend, Spanish authorities confirmed that Cristiano Ronaldo had been charged with evading tax, with El Mundo claiming that the investigations were at “an advanced stage.” Ronaldo is the latest figure in football to come under investigation for this, with Jose Mourinho, Wayne Rooney and Lionel Messi all high-profile names who have been accused of the same thing in the past.

However, Gestifute, who represent Cristiano Ronaldo, have issued a statement denying these claims and have posted a photo of Ronaldo’s income in a bid to clear up any speculation about the matter.

“Cristiano Ronaldo communicated to the Spanish Tax Agency on 30 March all the information about his assets, as can be shown in the attached documentation,” the statement read, according to The Guardian

Of the photo, they said, “This communication, which was not required by law, constitutes irrefutable proof that Cristiano Ronaldo and his representatives are in good faith and cooperate with the authorities in a spirit of transparency and compliance with legality.”

The document is pictured below: 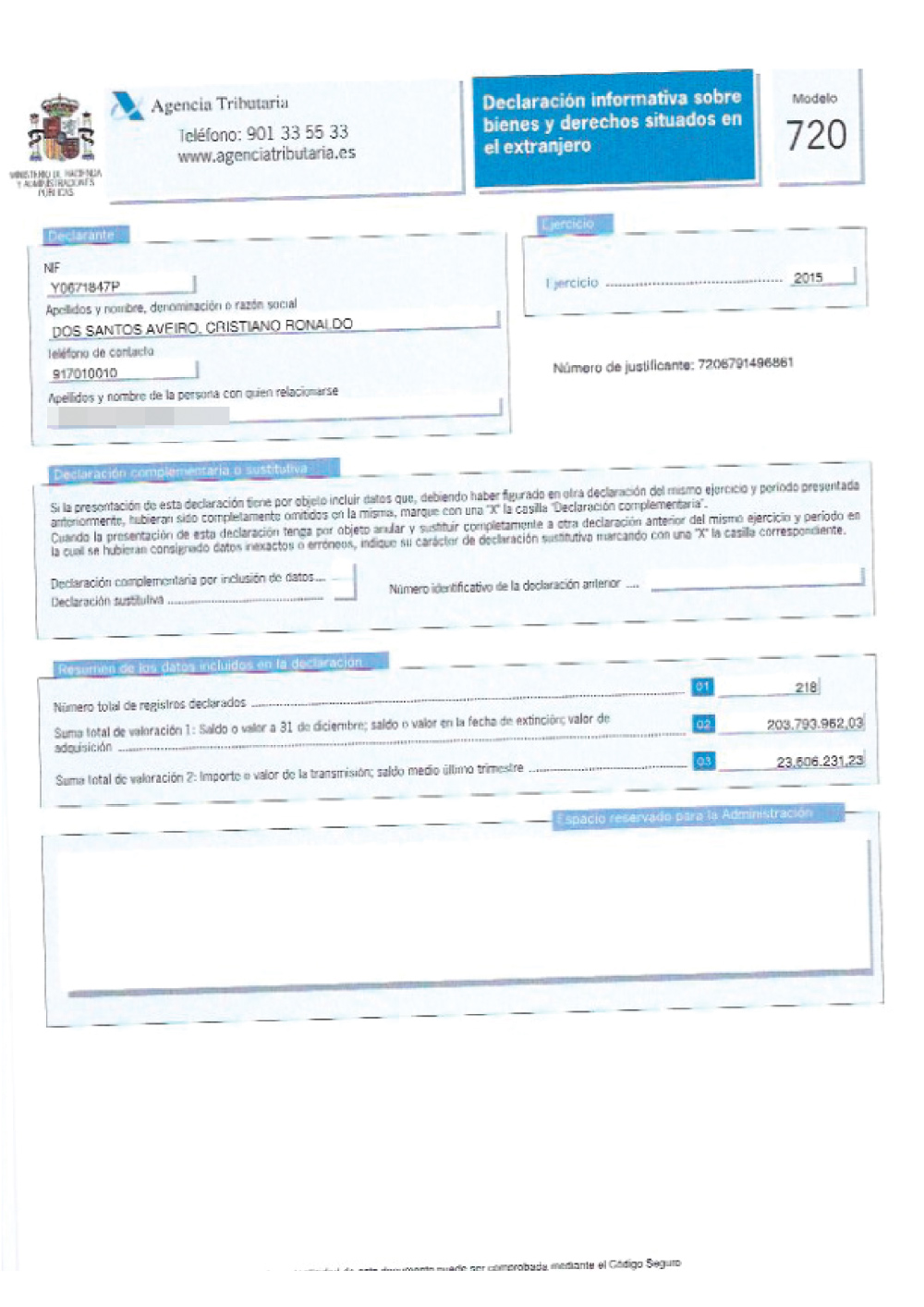 Ronaldo himself was relaxed about the matter, telling a reporter “Do you think I’m worried? He who owes nothing fears nothing.”

Spanish authorities have yet to respond to the statement made by Gestifute.

Borussia Dortmund have denied claims made by Marca that Real Madrid have come to a special transfer agreement with the Germans.

In their report, Marca claim that the two clubs have a healthy relationship and that they have further strengthened it after Dortmund agreed to give them first option on three of their players – Pierre-Emerick Aubameyang, Ousmane Dembele and Julian Weigl. They claim that Dortmund will not sell those players to any other sides without first informing Real Madrid about any interest or bids in those players from other clubs.

They further reported that Real Madrid were notified by Dortmund about Manchester City’s intention to sign Ilkay Gundogan, but Real Madrid informed them that they had no intention of signing the German midfielder and he was then sold to City.

However, both Thomas Tuchel and Dortmund’s media director have rubbished those reports.

When asked about the alleged agreement on Friday, Dortmund coach Thomas Tuchel expressed his surprise, saying:

“What do we get from this agreement? That’s the first time I’ve heard about this. I’m not sure what we would get from it.” he said, according to ESPN

“That’s complete fiction. It’s perplexing. Of 20 different outlets reporting it today, only one contacted us.”

Ozil, who spent three years at Real Madrid before joining Arsenal in a club-record £42.5m deal, had hinted last week that he could potentially return to Real Madrid one day.

However, Balague has said that this is not the case. When asked if Ozil wanted to return to Real Madrid in a Q&A session with Sky Sports, Balague said, “No. Mesut Ozil is not keen to re-join Real Madrid, partly because Real don’t want him either. They were happy to let him go for the price he went, and they are not looking for that type of player.”

Balague usually has an inside track on transfers when it comes to Real Madrid, so it is likely that there is some substance to his claims. Real Madrid are well stocked with creative midfielders, and currently do not have a need for any more.