Liverpool go into the match on Sunday placed second in the Premier League table, just a point behind leaders Chelsea and level on points with Manchester City who sit third on goal difference. With City and Chelsea meeting at the Etihad Stadium on Saturday, the Reds could have a chance to climb the summit if the result of that fixture goes in their favour.

Talking about recent form, hosts Bournemouth come into this match on the back of a 3-1 loss at Arsenal after fighting valiantly for the majority of the match. Eddie Howe’s side have run into a patch of bad form of late though, having won just once in the last five games. With Liverpool presenting themselves as the Cherries‘ toughest visitors to date this season, a fourth defeat in five looks likely.

Liverpool, on the other hand, have not lost since going down 2-0 to Burnley on Matchday 2. The Reds have gone 15 undefeated since then, and come into this match riding high on confidence after a 2-0 win over Leeds United on Tuesday.

The win clinched a place in the EFL Cup semi-finals for Jurgen Klopp’s men and they will be keen to continue their unbeaten run when they visit the Vitality Stadium on Sunday.

Eddie Howe has midfielders Lewis Cook (ankle) and Andrew Surman (hamstring) out for at least a month, with Surman suffering a setback in his bid to return from his injury. Meanwhile, first choice goalkeeper Artur Boruc (back) and defender Charlie Daniels (hip) have a fitness test ahead of the match, while midfielder Junior Stanislas (match fitness) is expected to feature too.

On-loan midfielder Jack Wilshere will slot back into the starting lineup after missing the match against parent club Arsenal. Jordan Ibe has recovered from an illness, and he is in contention to start when his former club come visiting on Sunday.

Wilshere’s return to the starting lineup alongside Stanislas’ will provide a huge boost to the Cherries‘ attack, which has struggled slightly in recent weeks, and give them the impetus to exploit Liverpool’s vulnerabilities at the back. Harry Arter and Dan Gosling will look to keep things tight in midfield and separate the Liverpool midfielders from their attack.

In defence, the Bournemouth defenders are set to face a tough time against the pace of Sadio Mane, the trickery of Roberto Firmino and the freshness of Divock Origi. 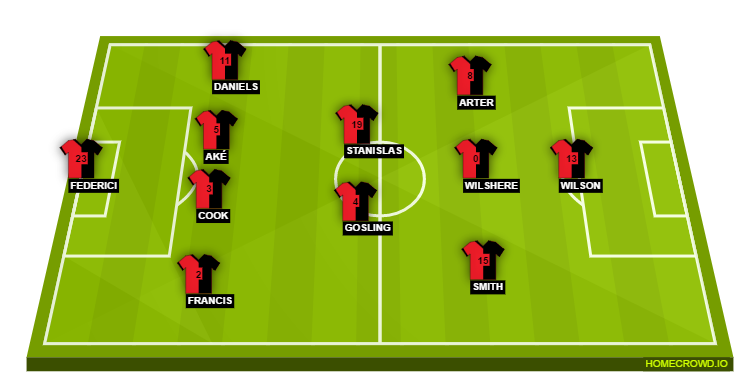 Liverpool have been rocked by the injury to talismanic attacking midfielder Philippe Coutinho in the 2-0 win over Sunderland last week. The Brazilian hurt his ankle midway through the first half, and scans revealed that he is set to face a five-week spell on the sidelines which means that he will only return to action in 2017.

Striker Daniel Sturridge is another big-name absentee for the Reds, and the England international is set to miss a third consecutive match due to a calf strain. Midfielder Sheyi Ojo (back) and striker Danny Ings (knee) are the other players missing from Jurgen Klopp’s squad.

While Liverpool are struggling with a number of injuries in attack, Jurgen Klopp has a full set of defenders and midfielders at his disposal on Sunday. The best piece of news for them is that Adam Lallana is finally back after missing the two league games post the international break with a groin injury. Roberto Firmino, too, returns after missing the midweek EFL Cup match due to a calf issue.

Lallana is expected to slot straight back into the starting lineup alongside captain Jordan Henderson and Dutchman Georginio Wijnaldum. In defence, Klopp should continue with the settled back four of Nathaniel Clyne, Joel Matip, Dejan Lovren and James Milner, and the quartet will aim to help Loris Karius keep a fourth straight clean sheet in all competitions.

The options up front are thin for Klopp and the front three of Firmino, Mane and Origi pick themselves automatically.

Jack Wilshere’s move to Bournemouth happened in the dying stages of the summer transfer window, as the Cherries reportedly snatched their man from the grasp of AS Roma. Since the move to the Vitality Stadium, Wilshere has been slowly inching back to his best, after putting in some very important performances for the team.

So far, he has been one of the most influential players for Eddie Howe’s team, providing stability in the middle of the park while bringing in a burst of creativity to the team’s attack. Back after being forced to sit out against Arsenal last week, his performance on Sunday will be key for Bournemouth if they are to take anything from the match.

Bournemouth have continued to impress at the start of the 2016/17 season, and the second season syndrome doesn’t seem to have affected Eddie Howe’s highly energetic young team. At home, they’ve looked their best season, losing just twice in the six matches at the Vitality so far.

With impressive results against Tottenham Hotspur and Hull City under their belt, they will look to claim a first high profile scalp with a win over Jurgen Klopp’s Liverpool.

Liverpool have romped to the upper echelons of the Premier League table this season, with strong attacking displays so far. The Reds boast the strongest attack in the league right now, having scored 32 goals from their opening 13 fixtures and will look to put the Bournemouth defence under relentless pressure on Sunday.

One of Liverpool’s title rivals will inevitably drop points on Saturday. So, with the potential to go top of the table this represents as a golden chance for Jurgen Klopp’s men to take charge of the title chase, as we get into a busy December. We predict a narrow odd-goal win for Liverpool.