Jose Mourinho will look to avoid a third successive defeat as Manchester United face a tricky away fixture against Watford.

Watford come into the game on the back of a solid 4-2 win against West Ham last weekend and have maintained their record of scoring in every game this season. Walter Mazzarri would relish the prospect of going up against his old rival Jose Mourinho and pile further agony on the Portuguese.

Manchester United, on the other hand, come into the game with an aim to prove themselves. The players have been underperforming in the past two games, with players like Pogba and Rooney bearing most of the brunt of the United fans. A third successive defeat would be absolutely devastating for Jose Mourinho and his plans to mould United into the team that was once feared under Sir Alex Ferguson.

Stefane Okaka is nursing a hamstring injury he picked up last weekend against West Ham on his club debut and is guaranteed to miss out. Younes Kaboul and Sebastian Prodl also received knocks in the same game but are included in the matchday squad. Their selection is likely to be down to the respective results of a late fitness test.

There is a general feeling that Walter Mazzarri is yet to understand what his best eleven is as he has already used 22 players in the space of just 4 games. Still, the danger is likely to come from the attacking duo of Odion Ighalo and Troy Deeney while Etienne Capoue will look to venture forward from the midfield at every opportunity.

Watford have been defensively fragile which has cost them a few times already this early into the season. Mazzarri is likely to deploy his usual 3 men at the back as the manager likes the depth and width in such a formation. But it would also give more space for the creative players of Manchester United, which could spell trouble for Watford if not closed down in time.

The formation, though, heavily depends on the availability of Kaboul and Prodl, and Mazzarri may have to alter the formation a bit in the wake of both being unavailable for selection. 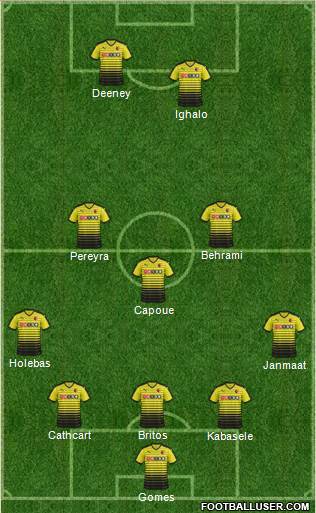 If Prodl and Kaboul pass the late fitness tests, they are likely to take their place in the starting lineup instead of Cathcart and Britos.

Meanwhile, Jose Mourinho would be without the services of Henrikh Mkhitaryan who is likely to miss this weekend’s match with a thigh problem. Phil Jones is reportedly out for a month while Eric Bailly will face a late fitness test after picking up a knock against Feyenoord.

But Jose would have the likes of Wayne Rooney, Luke Shaw and Antonio Valencia back, with the trio not a part of the traveling squad that fell to a 1-0 defeat to Feyenoord. While Shaw and Valencia are thought to have been genuinely rested, there is speculation that Rooney was dropped due to his performance in the derby.

Regardless, the United captain would be raring to go onto the pitch and prove Mourinho and United fans that the performance against City was just a blip. Also, Mourinho would be looking towards his players for a reaction at Vicarage Road in response to the humiliating loss suffered at the hands of Feyenoord and it is likely that Pogba will earn another start as he continues his quest to acclimatise himself with the Premier League.

There have been question marks as to the formation used by Mourinho and its ill-effects on Pogba’s influence on the pitch, and the Portuguese might look to tweak things a bit. But it may also be highly likely that Mourinho would not risk experimenting with another formation in a match that is hugely significant and important to win.

Bailly should start if fit but there is uncertainty around who will actually partner the Ivory Coast international. Mourinho has slowly eased Smalling into the lineup and the English international looked good in the Feyenoord match. Blind’s weakness was highlighted in the derby as he gifted De Bruyne the first goal of the match and Mourinho could very well choose to start Smalling, who was arguably the most consistent performer last season for the Red Devils.

Elsewhere, Luke Shaw and Valencia are likely to return to the starting lineup whereas Memphis might just make the cut, but it looks highly unlikely at this point. 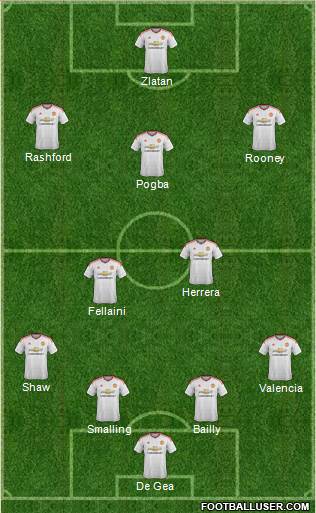 Blind may start in case Bailly is ruled out for the match.

1. Watford is yet to beat Manchester United in the Premier League era, having recorded their last win against United in the 1986-87 season at Vicarage Road.

2. Manchester United have managed to win the game following a defeat in the Manchester derby on all four previous occasions.

3. Manchester United have not managed to win the first three away games of a season since 1993.

4. Watford have failed to record wins in two league matches in a row in 2016.

5. Wayne Rooney is currently at par with Alan Shearer at 87 goals in terms of highest number of away goals scored in the Premier League, and a goal would make him the undisputed number one in this category.

This is a match that is highly significant in terms of mapping the current United squad’s title credentials. The team come into the game on the back of two defeats and the away game against Watford would be a testament to the squad’s ability to bounce back from disappointment. United have won each of their previous six meetings and Jose Mourinho would be determined to grab a win and get his United team back on track.

Wayne Rooney is likely to make the difference on the pitch as United look to bounce back from back-to-back losses. (Picture Courtesy – AFP/Getty Images)

Watford have a record of scoring and conceding in each of the four games thus far and The Hard Tackle sees little reason in the trend being broken on Sunday. Wayne Rooney is likely to be the difference for Manchester United while the attacking duo of Deeney and Ighalo could prove to be troublesome to deal with for the United defenders. Even though it is going to be a tricky tie for Manchester United, their star-power is likely to push things in their favour and edge out a win for Jose Mourinho.