Real Madrid will be looking to regain their lead at the top of the La Liga standings as they face Espanyol at the Cornella-El Prat on Sunday.

Espanyol go into the match without a win from their first three league games under new manager Quique Sanchez Flores, who joined the club after his spell with Premier League outfit Watford. The club has seen a change in ownership that has enabled them to be competitive in the transfer market, but that is yet to be reflected in the results on the field.

Real Madrid, on the other hand, go into the fixture on the back of a late comeback win against Sporting CP and Zidane would be hoping to continue his winning streak in La Liga.

Espanyol will be without Javi Fuego in midfield, with the player out with a suspension due to a red card received in the previous game. Marc Roca has been making an impression with the youth squad for Espanyol and Flores might choose to start with Roca in place of the suspended Javi Fuego.

Diego Lopez looks set to start in goal against his former team and he will not be the only one facing his former club on Sunday — Quique Sanchez Flores was himself a player and youth coach at Real Madrid before going on to have a successful managerial career at other clubs.

The onus is likely to be on the attacking duo of Gerard Moreno and Leo Baptistao while Pablo Piatti’s wing-play would be essential in Espanyol’s hopes of find a way past the Real Madrid defence. Piatti has been the pick of the players for Espanyol with 2 goals and 3 assists recorded in the 3 games thus far for the club. Flores would look to bring on Jose Antonio Reyes, if needed, to add experience to the attack.

However, it is the defence that is a cause for worry for Flores as Espanyol have leaked a mammoth 9 goals in 3 matches. While the attack has compensated at times with 7 goals, the defensive frailties have cost Espanyol in these games.

There are positive signs for Flores and the club and if the squad is able to curb the amount of goals conceded, Espanyol might just stand a chance against Real Madrid in front of their home fans. 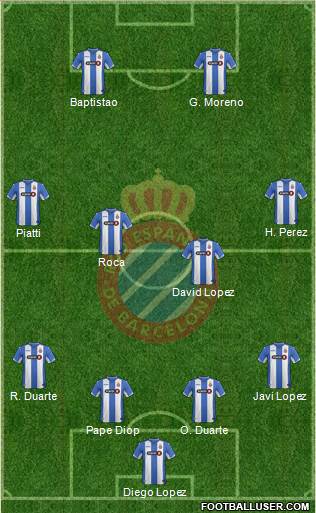 Zidane has confirmed that Real Madrid would be without the superstar duo of Cristiano Ronaldo and Gareth Bale, with the players nursing a throat problem and a knock suffered against Sporting CP respectively. Karim Benzema looked far from fit against Sporting CP and it is likely that Zidane will prefer to start with Alvaro Morata, which means Real Madrid will go into the game without the famous BBC trio.

The absence of the trio is likely to put more pressure on creative midfielder Luka Modric as the Croatian would be entrusted with the task of keeping things moving and providing passes to the front three. The former Tottenham midfielder has proven on previous occasions that he is more than capable of shouldering the responsibility in the absence of other superstars and Zidane is likely to rely on Modric once again on Sunday.

James Rodriguez changed the game after coming on in the last 10 minutes of the game against Sporting CP and is likely to be given a deserving start against Espanyol. Keylor Navas is still doubtful and Kiko Casilla is likely to retain his place between the posts for Los Blancos. 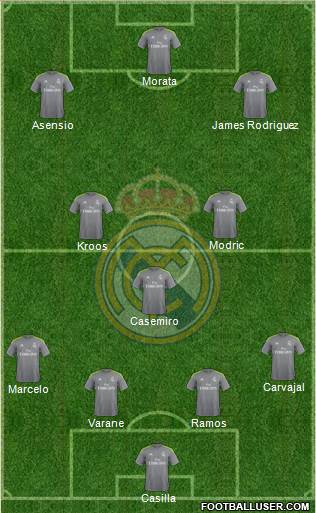 It is likely to be down to the duo of Modric and James Rodriguez to cover up for the absence of Ronaldo and Bale. (Picture Courtesy – AFP/Getty Images)

Espanyol appear to be slowly improving match-by-match and are likely to be a nuisance for Zidane and his men, especially in the absence of Ronaldo and Bale. But Real Madrid’s star power and the quality of Modric, Kroos, James Rodriguez and Morata is likely to push Madrid towards a victory over the Catalan club. James Rodriguez would be determined to prove to Zidane that he has what it takes to be a regular in the star-studded side and is will be the man to watch in the fixture.