Napoli will play host to AC Milan in Round two of Serie A fixtures at the Stadio San Paolo in Naples after playing out a 2-2 draw away to newly promoted Pescara. Maurizio Sarri’s men will look deny Montella’s team any sort of momentum that they might try to pick up on building from their 3-2 win against Torino.

Both teams had very different transfer markets this year. Napoli responded well after losing their talisman Gonzalo Higuain to Juventus by bringing in the likes of Diawara and Zielinski, both of them Milan targets along with Arkadiusz Milik from Ajax. Milan’s transfer market has been very underwhelming as they brought in relative unknowns, one of whom is set to start against Napoli on Saturday.

Napoli have been hugely successful against Milan in recent years; Milan fans will still remember the 0-4 trouncing they received on home turf last season. That being said Napoli still face a tough task ahead of Saturday’s showdown which will have a lot to say in the power dynamics of the league, although it’s still early days in the season.

Napoli will be without the services of Lorenzo Tonelli (knee injury) and Emanuele Giaccherini (muscle injury), but other than that none of their first team players are missing as Sarri is set to field a full-strength side. There is some doubt as to who will start in attack. There is a vast amount of speculation surrounding the future of Sarri’s current first choice striker Manolo Gabbiadini who might be offered in a swap deal involving Fiorentina’s Nikola Kalinic.

Two-goal hero Mertens will probably start alongside Callejon and Gabbiadini in attack ahead of Lorenzo Insigne. The diminutive Belgian is undeniably Serie A’s biggest impact sub, but he has done more than enough to deserve a first team place. Allan and Jorginho will start alongside Hamsik and will easily outweigh the lacklustre Milan midfield. It remains to be seen whether Sarri’s men will be able to put in the finished product in the absence of Higuain or not. 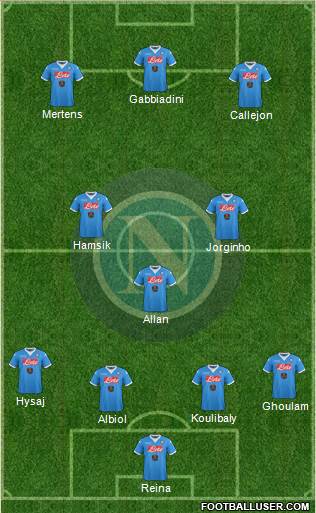 The failure of Milan’s transfer market ventures were glaringly evident in the display against Torino despite three points on the board. The defensive frailties are all too obvious while the midfield at the moment is just inadequate. Maybe former Napoli man Jose Sosa who was brought on from Besiktas recently can bring in the much needed quality into the midfield.

Jose Sosa in all probability however start on the bench as Montolivo will start alongside Juraj Kucka and Bonaventura yet again in the midfield. Former Genoa man Andrea Bertolacci was stretchered off in the last game shortly after coming in as a sub. He is out for two months.

Former Parma and Luverpool defender Gabriel Paletta will also miss the tie because of a red card he picked up in the game against Torino. New signing Gustavo Gomez will start the game in defense alongside Romagnoli who was recently subjected to two failed Chelsea bids.

All eyes will be on Gustavo Gomez and how he performs alongside Romagnoli against Napoli as Milan’s centre back pair will have a torrid time dealing with the threat of Gabbiadini. Italy’s Euro Cup hero Mattia De Sciglio will marshal the flanks with Abate and the duo will look to keep Callejon and Mertens at bay and prevent them from putting in crosses for Gabbiadini and Allan. 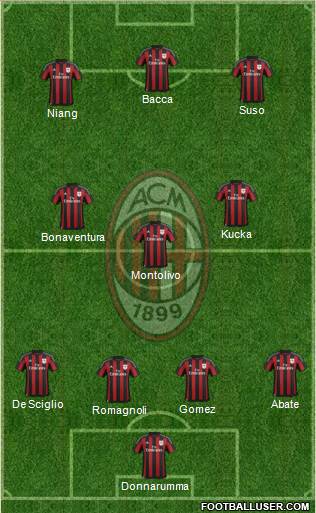 Mertens is not only of the most underrated players in Serie A, but also one of the most underappreciated. He has accepted life in Naples as vice-Insigne despite performing admirably whenever given the opportunity. Insigne had an excellent season last year which further kept him out of a starting lineup, but he was always utilised as a substitute in Serie A as well as in Europe. Mertens will look to create all sorts of problems for Abate who can perhaps match the Belgian in pace but will be questioned in terms of technicalities.

Niang has been Milan’s standout player in attack last season and it was he who provided the all important spark necessary for the first goal after he played a through pass to Abate who crossed to an unmarked Bacca, who made no mistakes in the final third. Niang provides the creative spark going forward, he has still not found his shooting boots but he makes up for what he lacks in front of the goal with hard work.

Sarri will urge his team to bounce back after their opening game was drawn against Pescara who is managed by former Milan player and legend Massimo Oddo. Milan’s attack is perhaps better than Napoli at the moment with hattrick hero Bacca leading the front line, but Bacca is yet to score against the top three teams in Italy.