Liverpool kick-start their journey in the EFL Cup for the 2016-17 season with a visit to Championship side Burton Albion on Tuesday.

The Reds were dealt a blow at Turf Moor during the weekend when they suffered a 2-0 loss at the hands of newly promoted Burnley in the Premier League. The match exposed Liverpool’s all-too-familiar weaknesses in defence, and Jurgen Klopp’s side will look to make amends in their second-round League Cup tie against Burton Albion.

Unquestionably, the most notable success of Klopp’s first nine months at Liverpool was his side’s remarkable progress in the cup competitions; the Reds progressed to the final of the Europa League as well as the Capital One Cup, which is now the EFL Cup. The German will look to better that record this time around and possibly go one step further and win the competition.

BURNLEY, ENGLAND – AUGUST 20: Manager of Liverpool Jurgen Klopp looks on during the Premier League match between Burnley and Liverpool at Turf Moor on August 20, 2016 in Burnley, England. (Photo by Jan Kruger/Getty Images)

Burton Albion, on the other hand, will take inspiration from Burnley’s exploits from the weekend to possibly try and force a huge upset in the 2nd round of the competition. Nigel Clough’s side achieved promotion to the Championship for the 2016-17 season and currently sit 18th on the table after 3 games. Given his side’s recent run of form, it will take something special from Burton to upstage Liverpool at the Pirelli Stadium on Tuesday.

In his pre-match press conference, Klopp did indicate that he would make changes to his team, but suggested that they would not be radical as he is still working out his best eleven. Reds captain Jordan Henderson had a terrible game during his side’s weekend loss at Burnley and is likely be on the bench during his side’s visit to Burton.

With the return of players from injury, it’ll be interesting to see what formation Klopp uses on Tuesday. He played the 4-3-3 formation against Burnley and Arsenal, having predominantly used the 4-2-3-1 last season. While it worked to devastating effect against the Gunners, it wasn’t quite the case against Burnley. The formation missed the pace and penetration the likes of Alberto Moreno and Sadio Mane offer, which aided the Reds during their game against Arsenal.

Liverpool’s Belgian striker Divock Origi will have to have his shooting boots on and will be tasked with unlocking Burton’s defence on the night. (Photo credit: IAN KINGTON/AFP/Getty Images)

The absence of Mane meant Daniel Sturridge was deployed on the right wing instead of his natural position up front. In hindsight, that did not help the England international, who usually likes to get involved in play more often and provides his side with that extra bit of creativity while stationed in the centre of the park.

Divock Origi is expected to deputise for Sturridge up front on Tuesday, with Marko Grujic and Emre Can expected to take roles in midfield. Joel Matip could make his competitive debut for Liverpool. Keeping those potential changes in mind, the Reds could go ahead with a 4-3-3 formation, with Can sitting in the holding midfield position. Meanwhile, Origi is likely to be supported by Roberto Firmino and Lazar Markovic from either flank. 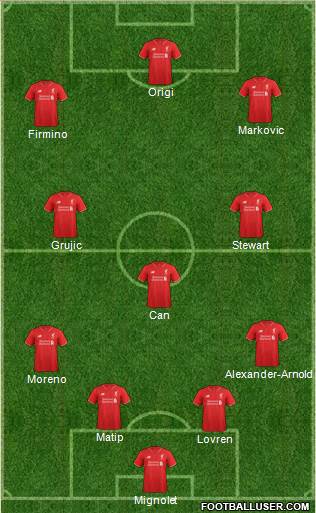 With a visit to neighbours Derby County on Friday, manager Nigel Clough explained the magnitude of the week ahead for his side, acknowledging that facing clubs like Liverpool is a rare opportunity for his team. Burton have scripted a remarkable rise up the ladder of English football, making their way to the Championship in only seven years after making to The Football League.

On Tuesday, Clough will be without first-choice defender and captain John Mousinho, as the centre-back is yet to recover from a hamstring injury. John Brayford is cup-tied having arrived on loan from Sheffield United earlier this week. The Championship side will be boosted by the return of Kyle McFadzean and Tom Flanagan, who were nursing a head and thigh injury respectively.

COLCHESTER, ENGLAND – APRIL 23: Burton Albion Manager Nigel Clough insists his side will have a go at Liverpool on Tuesday. (Photo by Stephen Pond/Getty Images)

Burton fielded a 5-3-2 formation against Blackburn Rovers on Saturday and could go ahead with the same against Liverpool. The absence of Mousinho could mean that the returning Tom Flanagan could take his place at centre-back.

Tom Naylor, who scored the late equaliser for the Brewers against Blackburn in their 2-2 draw at Ewood Park, is expected to keep his place in the centre of Burton’s midfield. Either one of Matty Palmer and Jackson Irvine could be rested, giving way for Lee Williamson to complete the trio of midfielders stationed at the centre of the park.

Stuart Beavon and Chris O’Grady are expected to keep their places up top for Nigel Clough’s side and will be tasked with troubling Liverpool’s defence. 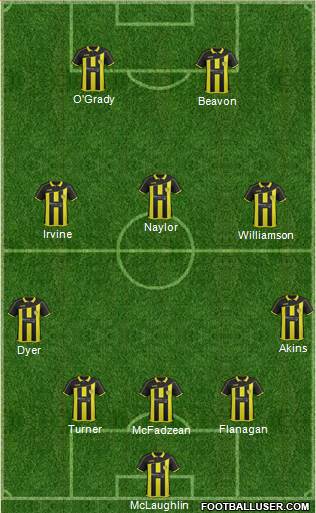 LONDON, ENGLAND – AUGUST 14: Rob Holding of Arsenal is closed down by Emre Can of Liverpool. (Photo by Mike Hewitt/Getty Images)

Whenever Emre Can has featured for the Reds, he has established how important a figure he is in Klopp’s team. After Henderson’s poor show at Turf Moor, Can is expected to be handed the duty of holding the midfield together and he could well be the difference for the Reds at the Pirelli Stadium.

Two goals in two games from Irvine have helped the Brewers to 4 points from their last two games after a poor start to their season. In the absence of John Mousinho, Irvine will be expected to deliver the goods for Burton and could be the man Liverpool need to keep their eye on.

Jurgen Klopp’s side will be expected to make a strong return against Burton after their loss during the weekend. With a near full-strength Liverpool side expected, Clough’s team will have a massive task on their hands if they are to spring a major upset.

The Premier League side should ideally have it easy against Burton, but given their inconsistency, Klopp will be on his toes and will urge his players to be at their best. The two sides are not particularly known for their defensive strength and there could be a lot of goals on Tuesday. However, the Reds should have enough firepower to comfortable seal their progress to the next round.