Manchester United entertain Southampton in their first home game of the 2016-2017 Premier League season on Friday, with world-record signing Paul Pogba expected to feature for the Red Devils.

The 23-year-old Frenchman’s first debut came in September 2011 when he came off the bench in a match against Leeds United. The next five years have been a whirlwind, as Pogba went on to achieve great success with Juventus before returning to Old Trafford amid much fanfare for what is reportedly a world record transfer fee.

The Red Devils face a Southampton team still reeling from the loss of manager Ronald Koeman to Everton. The Dutchman’s loss was compounded by the departures of key players including Sadio Mane, Victor Wanyama and Graziano Pelle. However, Claude Puel will look to try and cause an upset on Friday night with the players still at his disposal.

Efficiency was the key word to describe Manchester United’s performance in their opening game against Bournemouth. None of the goals were particularly spectacular, yet the attack prised open the Cherries from time to time throughout the course of the game. The Red Devils dominated possession, pushed forward and had a number of bodies in midfield — tactics they will try to emulate against the Saints as well.

The arrival of Pogba could oust Ander Herrera from the team. The Spaniard did a good job of playing as a deep-lying playmaker last time around, but Fellaini put in a brilliant performance and is unlikely to be dropped. The Belgian could play in a more defensive role this time around, giving Pogba the chance to maraud forward and join the attack.

The Saints got off to a less than convincing start as new signing Nathan Redmond bailed them out of trouble against Watford in a 1-1 draw at St.Mary’s. New manager Claude Puel has a massive task ahead of him as the club look to bounce back once again from the loss of a dynamic manager and several key players.

The game plan for the Saints will rely heavily on set-pieces, corners and long balls. The Redmond equalizer was created by a Shane Long header from a corner, and a headed goal from Charlie Austin was the decider the last time these two teams met. The Englishman and the Irishman may both be deployed up front if the need for goals becomes an urgency later in the game, as Southampton will be hoping their defence can help them edge this one. 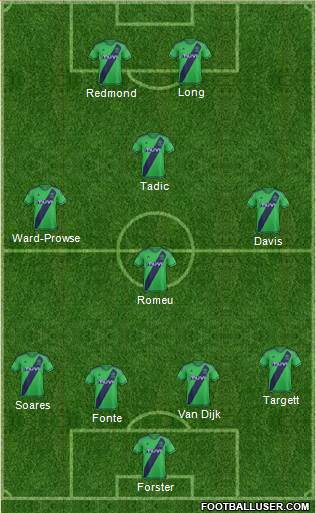 The much awaited return of Paul Labile Pogba is one the entire world will be watching on Friday night when United take on Southampton. (Photo Credits: Paul Ellis/AFP/Getty Images)

The current Southampton team is still reeling from the loss of several key personnel. They managed to resurrect themselves after similarly losing Mauricio Pochettino and a number of players in 2014, but the mastermind behind that resurrection — Ronald Koeman — will be a tough act to follow. Their opening display against Watford didn’t inspire much confidence and it may take some time for this team to get going.

Manchester United will be boosted by the return of Paul Pogba, and based on recent evidence, this side can go out and score goals. Henrikh Mkhitaryan will be looking to make an impact as well, with the former Dortmund playmaker inexplicably sidelined to the bench in the past couple of games. Expect a flurry of goals by the Red Devils in this one.