Barcelona look to avoid an upset in the season opener as the Blaugranes’ are riddled with injuries to first-team players ahead of the match against Real Betis.

Luis Enrique would be hoping to make a winning start to the new season as Barcelona aim to make it three successive Liga BBVA titles on the trot. There is still much speculation surrounding the Spanish manager’s contract situation, with his current deal set to expire at the end of the season and Luis Enrique would be hoping his side gets off to a great run at the beginning of the season, which in turn can speed up the process of his contract renewal at Nou Camp. Barcelona are fresh off a Spanish Super cup win where they demolished Sevilla by a scoreline of 5-0 over two legs and look to open their season with a bang against last season’s mid-table finishers Real Betis.

Real Betis, on the other hand, prepare for their first full season under the tutelage of former Sunderland manager Gus Poyet, as he joined the club at the end of last season taking over from caretaker manager Juan Merino. The club finished 10th last season and would hope for a better finish under the former Spurs man, while Gus Poyet would be determined to prove his credentials as a manger as he prepares to pit his wits against Luis Enrique.

German goalkeeper Marc Andre-Ter Stegen is likely to miss the season-opener after suffering a knee injury, which means Luis Enrique would start Claudio Bravo in goal despite the Chilean being reportedly close to a move to Manchester City. Javier Mascherano and Jeremy Mathieu are unavailable for selection due to injuries, which all but guarantees a start for Samuel Umtiti, in what could be his debut for the club. Jordi Alba was having problems with his stomach, but seems to have recovered in time, after he was brought on for the last half-an-hour against Sevilla in their second leg Spanish Super Cup tie on Wednesday.

Barcelona will be without the Brazilian duo of superstar Neymar and Rafinha, both the players are representing their nation at the Olympics, having reached the finals of the competition in Rio. New signing Andre Gomes will be unavailable due to a suspension, which, along with the injury to Andres Iniesta, would mean an unlikely start for Denis Suarez in his first league match after joining the club. Neymar’s unavailability is likely to push Arda Turan into the starting lineup with the Turkish also linked with a move away from Nou Camp.

Every football lover is aware of the tactics implemented on the football pitch by Barcelona i.e. their own brand of free-flowing possession football called the tiki-taka. However, Luis Enrique’s arrival has seen a slight shift in the club’s focus, with the former Barcelona player also adding an element of counter-attacking football, thus providing the club with a much-needed Plan B, which was found largely missing under previous managers.

Defensively, Luis Enrique has retained the club’s old policy of a high-pressing game with a usually high back-line attempting to catch the runners offside. Although Enrique has instilled his own playing style at Barcelona, some amount of freedom coupled with discipline which has shown itself to be fruitful over the past two seasons. The playing style has particularly suited Suarez, who has exploded for the club ever since making the move from Liverpool. 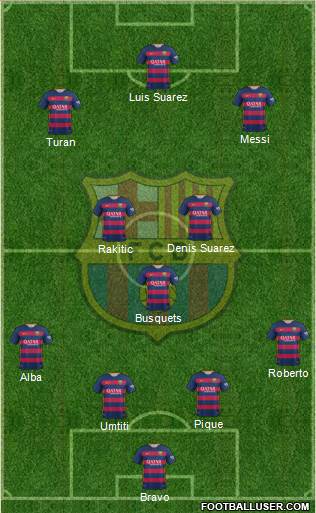 It is a genuine toss-up between Alba and Lucas Digne as it all comes down to whether Luis Enrique feels Jordi Alba is fit enough to start the game or the Barcelona manager might just decide to start both of them benching Sergi Roberto in the process. Elsewhere, Munir could well get the nod ahead of Arda Turan based on his form as he scored in the Spanish Super Cup against Sevilla.

Gus Poyet has added as many as 12 new signings to the squad that finished 10th last season as he looks to add shape and identity to his squad ahead of the new season. Betis would be without the services of Rafael Navarro and new signing Antonio Sanabria, who arrived from AS Roma – the players out due to injuries to the calf and shoulder respectively. Ruben Castro is likely to headline the Betis attack with Dani Ceballos and Charly Musonda on either side.

The midfield is likely to be led by Felipe Gutierrez alongside veteran Joaquin with Digard as the pivot. Aissa Mandi is a sure-starter at the centre of the defence with Poyet likely to choose either of Bruno or Pezzella to partner the former Reims player.

Gus Poyet was known for his loose and free-flowing brand of football during his time at Sunderland, which sometimes saw his team lose heavily to opponents since the playing style created too much space to exploit for the opposition. One believes the manager would’ve learnt from his mistakes and would look towards making his team defensively solid before implementing the playing style at Real Betis.

The main focus is likely to be to sit back and disrupt Barcelona’s play while attempting to catch them on the break. The focal point of the attack are likely to be the defenders and midfielders spraying the ball out to the attacking outlets in Musonda, Ceballos and Ruben Castro. The trio are likely to have some creative freedom in the final third of the pitch. The defence is likely to sit deep to absorb the pressure put on by the Barcelona attack, while Felipe Gutierrez’s role in the midfield will be key to their chances of holding the Blaugranes to a draw or even causing an upset. 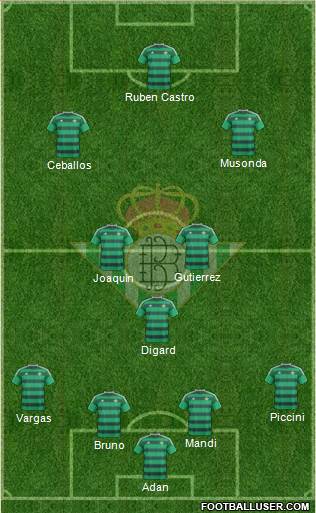 The absence of Javier Mascherano is likely to cause trouble at the back for Barcelona with Samuel Umtiti not yet settled at his new club which means Real Betis might manage to score. Barcelona would find it tough without the likes of Andres Iniesta and Neymar, but the star power of Luis Suarez and Lionel Messi are likely to carry the Blaugranes over the finish line in their season opener against Real Betis. The fixture looks set to be a mouth-watering clash, with the Champions attempting to start on the right foot despite a depleted squad.