Having played out 50 matches through 30 days of the competition, the Euros are finally down to just two teams with Paris the centre-stage for tonight’s summit clash between Portugal and hosts France.

When discussions, predictions and analysis were on before the commencement of the Euros, quite no one gave Cristiano Ronaldo’s Portugal much of a chance, dismissing his side’s prospects at the tournament for their singular reliance on the Real Madrid star to deliver the goods. However, with a number of players standing up to the occasion, the burden has partially been taken off the back of Ronaldo and engineered an unlikely run to the final for the Selecao.  France, on the other hand, have progressively developed through the course of the tournament and led by the heroics of Antoine Griezmann, have kept their dreams of winning the European Championships on home soil alive.

It’s a feeling of deja vu for Ronaldo and Griezmann who only a couple of months earlier met in a Champions’ League final in remarkably similar circumstances. On both the occasions, Ronaldo’s team has had to overcome a British side in the semi-final stage to seal their passage through to the show-piece event while Griezmann’s side was tasked with seeing out a German outfit led by Manuel Neuer to confirm their ticket for the same. However, what was a battle for bragging rights in an all-Madrid final in the Champions League a month ago is now a fight for national pride with continental glory and a place in the FIFA Confederations Cup next year at stake.

The French are finally there where they’ve wanted to be since fighting their way through to a last minute win against the Romanians on Matchday 1. Didier Deschamps’ side initially came through as unconvincing throughout their progress in the competition, having struggled to do away with mediocre opposition in the group and knock-out stages. However, Les Bleus came in to their own in the game against Iceland after ending the Vikings’ dream run in the competition with a thumping  5-2 scoreline. The confidence from that victory helped them overcome the mighty Germans in the semi-final enroute their passage to the grand final at the Stade De France.

Part of France’s late burst in form and strength in the competition has been attributed to a change in formation from 4-3-3 to a 4-2-3-1 by Deschamps. While it was a forced change against Iceland due to the suspension of N’Golo Kante, the freedom and attacking impetus it gave his key players like Griezmann and Giroud encouraged the boss to try it out against the Germans as well. Having overcome the mighty Germans and progressing through to the finals, there is no reason why Deschamps shouldn’t deploy the same line-up once more against the Portuguese.

Another player that has personally benefited from a UEFA suspension in this competition is Barcelona’s new man Samuel Umtiti. The youngster earned a call-up for the Iceland game after first-choice defender Adil Rami was suspended owing to his second booking in the competition, against the Irish. Umtiti’s impressive display against the Icelanders earned him a spot in the starting XI for the semi-final where he shined against the Germans, helping Hugo Lloris keep his third clean sheet in the competition.

Hence, despite the availability of the entire squad, we can expect little changes for the big final tonight from Deschamps. A 4-2-3-1 formation is expected with Giroud sitting at the top of the attacking line-up and the trio of Dimitri Payet, Moussa Sissoko and Griezmann placed behind him. Paul Pogba and Blaise Matuidi will take their usual midfield positions with Koscielny and Umtiti holding the defence together at the back. Evra and Sagna take their full-back positions with Hugo Lloris guarding the French goal. 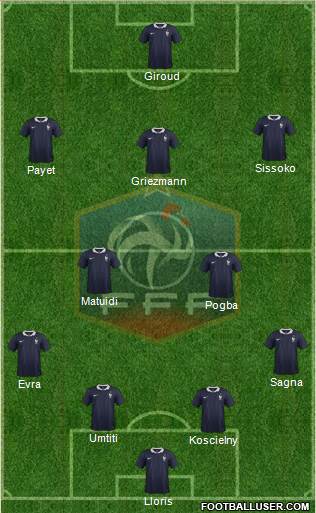 Despite just scraping through a group finishing in 3rd place amongst Iceland and Hungary, the Selecao have somehow managed to get themselves all the way through to the finals, having won only a solitary game in under 90 minutes. Their semi-final victory over the Welsh, however, was an authoritative display and was the Portuguese’s best game in the competition by a fair distance.

From 18-year-old Renato Sanches to the experienced campaigner Rui Patricio, quite a number of players have risen to the occasion in the European Championships this time around. Coach Fernando Santos will hope his side can work their magic once more to defeat the French.

Portuguese players celebrate at the end of the Euro 2016 semi-final football match between Portugal and Wales at the Parc Olympique Lyonnais stadium in Décines-Charpieu, near Lyon, on July 6, 2016.
/ AFP / Francisco LEONG (Photo credit should read FRANCISCO LEONG/AFP/Getty Images)

A European final isn’t new territory for Ronaldo who comes with the pedigree and experience of successfully winning 3 out of 4 Champions League finals in Europe with Real Madrid and Manchester United combined. However, the Euro 2004 final with the Selecao will long remain in Ronaldo’s memory as he missed a gilt-edged opportunity late in the game that eventually handed Greece arguably their greatest sporting triumph in their history, at the expense of hosts Portugal.

Ronaldo now has the opportunity to inflict a similar heart-ache on a French side in the final today that would undo all his shortcomings from that fateful final at Lisbon in 2004. Pepe who was missing from Portugal’s semi-final victory due to a thigh problem, could make a return today and is expected to replace a fiery Bruno Alves at centre-back. William Carvalho is expected to replace Danilo in a midfield line-up that also houses Joao Mario, Renato Sanches and Adrien Silva. Nani and Ronaldo are expected to lead the line with Ricardo Quaresma coming on as an impact substitute. 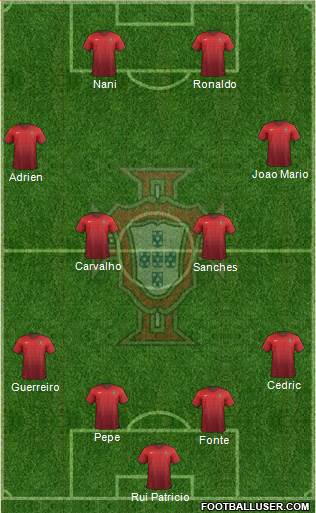 This is sort of a no-brainer really, given his performances for the French side. The 25-year-old has displayed a great level of maturity shouldering a nation’s expectations and has duly delivered in this competition. Revenge for a Champions League final heart-break will be on the minds for the Atletico Madrid starlet who will look to win France’s first major trophy since Euro 2000.

A talisman in the ranks of the Selecao, the importance of the Ronaldo’s presence in Fernando Santos’ side cannot be emphasized enough. Having racked up 3 goals and 2 assists in the competition, the Portugal’s hopes of ending their long wait for a major trophy rests in the hand of the Real Madrid forward.

Call it what you will, but France look destined to take this tournament home after all they have been through as a nation in the last 18 months. Their performance has grown better as they progressed in the competition, and with an enviable talent pool at their disposal, France have what it takes to break the spirits of an inspired Portuguese team. Paris could be witness to a close encounter on the night of a big final that may well stretch up to the very end before the French come through.

The two sides met in the semi-finals of the Euro 2000 hosted by the Netherlands and Belgium. It was a 117th Zinedine Zidane penalty that sent Les Bleus through after Thierry Henry equalised at the back of an early Nuno Gomes opener that sent Portugal ahead. France would go on to win the competition and become the second side to win both World Cup and European Championships in succession.