Having laboured their way through to the quarter-finals, France are now destined to face tournament debutants and giant killers Iceland  in-order to set up a semi-final date with Germany at Marseille.

Prior to the commencement of the tournament, France would have gladly accepted the prospect of playing the Republic of Ireland and Iceland en-route the semi-finals. However, if Iceland’s progress in the competition is anything to go by, France will be aware that nothing can be taken to chance against the minnows who are still to taste defeat in this tournament despite facing fancied opponents like Austria, Portugal, Hungary and England.

French captain Hugo Lloris rightly observed that superior talent is by no means an assurance of progress in a competition. Stronger sides like England and Spain have failed to make it past the Round of 16, while the lesser teams have progressed deep into the competition. The ongoing European Championships have shown the importance of a collective effort over individual brilliance which is why teams like Wales and Iceland have come through as far in the tournament.

While France will exercise caution, Iceland will fear no one as they will look ahead to yet another “David vs Goliath” styled battle set to be staged at Saint Denis’ Stade De France. Coach Heimir Halgrimsson has claimed his side haven’t produced their  best football yet and any display better than what the Icelanders managed against England, should give Les Bleus a reason to worry. Should they be able to effect one the greatest upsets in modern footballing history by beating Didier Deschamps’ men in their own backyard, Iceland will become the smallest nation to ever make it to a European Championship semi-final, beating a record set by Wales only 2 days earlier.

Should France seal their progress through to the semi-final, they will have had the easiest passages as compared to the other participants. However, following Les Bleus’ fighting 2-1 victory over Martin O’Neill’s Ireland, Patrice Evra has warned against the same situation happening against a dangerous Iceland side and believes the French have to hand the minnows the respect they deserve.

Deschamps’ side will be without N’Golo Kante and Adil Rami going into the quarter-final game tonight as both face a one match suspension after picking up two yellow cards. Kinglsey Coman’s role in the competition has largely been consigned to that of an impact substitute, however his appearance altogether is a doubt owing to the injury he picked up against the Republic of Ireland in Les Bleus’ round of 16 encounter.

Rami’s absence could see Barcelona bound Samuel Umtiti earn his first start in the Euros for France and Moussa Sissoko could come into the line-up taking up Kante’s defensive midfield role. Deschamps’ isn’t expected to tinker with his formation, making only the mandatory changes due to the suspended duo.

A 4-3-3 formation could once again see Giroud leading the attack aided by Dimitri Payet and the tournament’s joint leading goal-scorer Antoine Griezmann. Blaise Matuidi, Pogba and Sissoko are expected complete the midfield. Laurent Koscielny and Umtiti look certain to take their place at the heart of the French defence with Patrice Evra and Bacary Sagna continuing as full-backs.

Giroud and Koscielny will have to steer clear of unruly fouls that could potentially earn them a booking that would rule them out of France’s massive semi-final game, should they make it there. 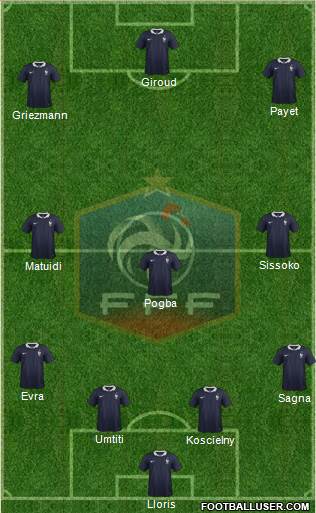 PARIS, FRANCE – JULY 02: In this handout image provided by UEFA Aron Gunnarsson and coaches Lars Lagerback and Heimir Hallgrimsson of Iceland attend a press conference at Stade de France on July 2, 2016 in Paris, France. (Photo by Handout/UEFA via Getty Images)

Iceland have enjoyed a dream run in the European Championships so far by securing victories over Austria and England, and will look towards beating the one of the favourites to win the tournament.

The competition debutants  have their entire squad up for selection ahead of the big game after captain Aron Gunnarsson returned to training after missing out on Thursday following a back problem.

Probably the biggest issue facing Iceland ahead of the game is that nine members of the supposed starting XI are one booking away from a suspension from the semi-final, should Lars Lagerback’s side audaciously secure progress. They are expected to field the same starting XI for a fifth consecutive game, starting with a 4-4-2 formation that over the course of the tournament has seen itself transition into a 4-5-1 or a 4-2-3-1.

Whether they will be able to champion the use of the traditional 4-4-2 like Leicester City did in the Premier League is there to be seen, but the Icelanders will surely leave the tournament with plenty of positives having vastly surpassed even their own expectations in the Euros. 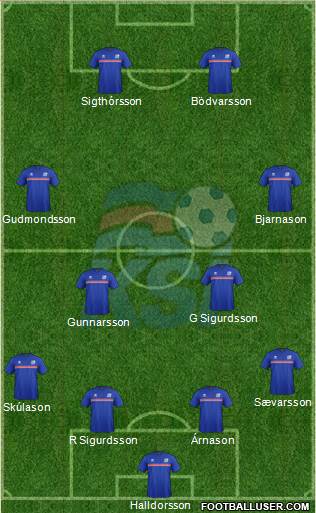 The Swansea midfielder has been working hard behind the scenes of Iceland’s remarkable progress in the tournament. He is a key member of that midfield that enables his side to complete their lightning transitions from defence to attack.

France have been far from convincing this tournament, with the sheer quality of their players taking them through some testing games. A similar set of events can be expected in their clash tonight that may see Les Bleus just scraping past the Icelanders to keep their hopes of lifting the European Championship at home alive.