Spain and Croatia will play the final match of Group D on Tuesday to determine who tops the group. Spain is comfortably placed at the summit with 6 points from 2 games, while Croatia were left licking their wounds after they lost 2 points to Czech Republic despite taking a 2-goal lead in a match marred with fan violence.

Spain are coming off the back of their most convincing performance in the tournament so far, having dismantled Turkey 3-0. Croatia had enjoyed an excellent 166 minutes of Euro Cup football before it all started to go sour. The two Czech equalisers gave Ante Cacic and Srna a night to forget. However they have been all but guaranteed qualification with Turkey losing both their group games.

The Croatians have a chance to do one better and top the group if they manage to beat Spain or come 2nd if they manage a draw or if the Czechs lose against Turkey. If reports are to be believed, in a show of protest against the corruption in the Croatian FA led by the legendary Davor Suker, the Croatian ultras will be all set to make life difficult for their team once more.

Spain are not guaranteed the top spot which is why Croatian fans are doubtful about whether they’ll rest their key players. The fight to the top spot remains important because of the possibility of facing Italy or Belgium in the next round for the 2nd placed opponent.

Croatia’s Ivan Rakitic hopes that his Barcelona teammate, Andres Iniesta is rested ahead of the big quarter-final tie. “I think he (Iniesta) is enjoying himself enough now, but I hope he has a rest against us,” he said. Rakitic was filled with admiration for the Spaniard who is arguably the greatest midfielder of the generation.

Del Bosque will perhaps give a chance to Atletico’s Koke and Arsenal’s Hector Bellerin, but it is unlikely that he will want his team to be without the midfield wizard from Barcelona who has won it all with his club and his country at the highest level. 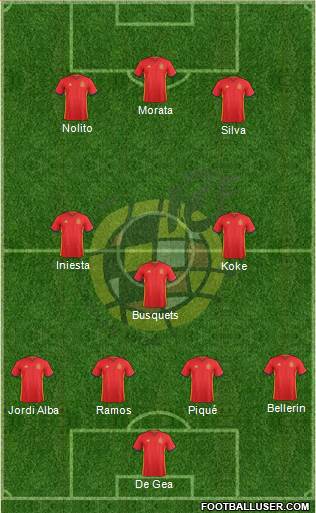 Perhaps one of the very few teams in the tournament who have the resources to outmanoeuvre Spain in midfield, Croatia will look to play their natural game against Spain, dominating the midfield with players like Brozovic and Rakitic. Luka Modric who scored the sensational goal in Croatia’s opening match against the Turks is facing a race against time to be fit for the crucial game.

Boris Nemec, the team doctor, told Croatian Television, “The situation isn’t very good. He strained his adductor and may not play in the next game. He should rest and make himself ready for the second round.” (via SportsMole)

In case Modric is unavailable for the match, Cacic will have to think about his options on the bench. He can either place his faith on Real Madrid’s Mateo Kovacic who’s been linked with a move to Liverpool, or he can bring Rakitic back into the midfield alongside Brozovic and Badlej. A couple of Dinamo Zagreb youngsters are also there at his disposal. Ante Coric is 18 and inexperienced but vastly talented.

If Rakitic is withdrawn into a less advanced role then Croatia can perhaps opt for a one man forward with just Mandzukic. The alternative is to bring in another vastly talented Zagreb youngster into the lineup. Marko Pjaca is 21 but he already has a senior goal to his name and the biggest clubs in Europe are already scouting him. 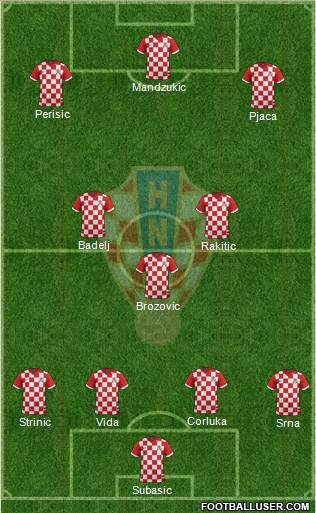 Alvaro Morata has more than made up for his howlers in the opening game with an excellent outing against Turkey where he scored a brace. He will look to outperform his opposite number and Juventus co-star Mario Mandzukic who plays as Croatia’s number 9. He has already formed a formidable partnership with Nolito and David Silva and with no dearth of service in a squad like Spain, comprised of the best midfielders from Europ,e it’s likely that he will find himself on the scoresheet again.

While Rakitic and Modric are the driving force behind the team, Cacic’s system is hugely dependant on its wingers to provide service to Mandzukic who is a towering presence capable of bullying the best centre-backs of the world. Perisic is easily Croatia’s most unsung player, having scored an exquisite goal in his last match to add to the number of key passes he has played over the last two outings. His crosses almost always finds their target as Rakitic will look to make those darting runs from the midfield.

Croatia will miss the fatigued and injured Luka Modric as he is the key man pulling the strings in midfield. Spain has entered the tournament as favourites and is likely to top the group and win the remaining match. Spain are also heavily guarded on the wings and despite Perisic and Mandzukic’s attacking prowess it is very difficult to see Croatia winning or holding their opponents as they won’t see much of the ball.