As we enter a new decade, The Hard Tackle takes a look at the best players to have represented Manchester United over the past ten years.

The last decade saw Manchester United experience the highest of highs and the lowest of lows. The 2010s started with the usual dominance under Sir Alex Ferguson, as they finally threw Liverpool off their proverbial perch by winning the 2010-11 Premier League title. Another league triumph in 2013 followed before the legendary manager called it a day.

Since then, though, the hunt for trophies has been rather dismal, with the Red Devils going through their most turbulent period in the Premier League era. Nevertheless, there were some geniuses throwing on the red of Manchester United as well as a few who failed to make their mark. At, The Hard Tackle, we attempt to pick out the best team of the decade for Manchester United.

One of just three obvious picks in our team. Who else but David de Gea to start in goal in the team of the decade for Manchester United? The best goalkeeper in all of Premier League in the 2010s, de Gea slowly grew in stature after initial hiccups at Old Trafford.

There were times when he was winning games almost single-handedly for Manchester United. His levels might have fallen off a cliff in the last 18 months, but there is no denying that de Gea is the rightful goalkeeper in this team, having won the club’s Player of the Season award four times while also making plenty of Premier League as well as World XIs.

One of the many problem areas for Manchester United following the retirement of Sir Alex. Rafael, Gary Neville, Chris Smalling and even Ashley Young played the role for Manchester United in the previous decade. However, there is no one who made as much of an impact as a right-back as Antonio Valencia, another player who started off as a makeshift full-back.

Valencia was given the first taste of playing in the role while Sir Alex Ferguson was still the manager. Under Jose Mourinho, he became one of the best right-backs in the Premier League before a forgettable 2018-19 season brought about an end to his time at the club.

Smalling was a candidate for this position. After all, he is the defender with the most appearances for Manchester United in the 2010s. Smalling, though, was used more as a right-back in the two Premier League titles he won and was only outstanding for about a season and a half. The same goes for Rio Ferdinand, who trumps Smalling due to the sheer impact he made.

By the time the decade turned over, Ferdinand was already on the decline. This is when he started using his experience to good effect. Not as involved in the 2010-11 season due to injuries, Ferdinand was simply excellent in the 2012-13 season; so much so that he even made the PFA Premier League Team of the Year for the season. Someone whose presence is still missed to this day.

Much like Ferdinand, Vidic was very much a veteran by 2010. Injuries had started taking their toll on the powerful Serb as well. However, he was one of the best defenders in the world in the 2010-11 season, when he was also appointed as the Manchester United captain.

Such was him impact in that campaign that Vidic was named the PFA Premier League Player of the Year in 2011, an accolade rarely bestowed to a defender. He also made the FIFA FIFPro World XI in 2011 as well as the PFA Team of the Year. The minutes would reduce till the time he left the club in 2014, but Vidic still remained integral to the title charges in 2011-12 and 2012-13.

Like de Gea, Evra was an automatic pick in the side. That he holds such a status is a testament to how big an issue the left-back slot has been since he called it quits at Old Trafford in 2014, with the likes of Luke Shaw, Daley Blind, Marcos Rojo and Ashley Young failing to make even a fraction of the impact.

Before the likes of Trent Alexander-Arnold came on and redefined the modern full-back role, Evra was doing much the same at the start of the decade while also being an able defender. His decline might have been spectacular, but Evra was just irresistible for the first three years of the decade.

A player who gave his all for the shirt. (Photo by Catherine Ivill/Getty Images)

One of three players who became a part of the first-team after Sir Alex Ferguson had retired. Ander Herrera had a mixed bag of a time at Manchester United, but he is perhaps, Manchester United’s best acquisition in the post-SAF era. Paul Scholes was unarguably a contender, but the Englishman was hardly a regular in the two seasons wherein Manchester United won the Premier League title.

Herrera, on the other hand, made such an impact that allowing him to leave for free last summer is proving to be a senseless decision. Along the way he had won three titles and had also been named the club’s Player of the Year once. Manchester United remain without a player who can harry the opposition like he does while also chipping in with crucial goals over the course of a season.

The only incumbent midfielder at the start of the decade who also cut it under managers other than Sir Alex Ferguson. Midfielders came and midfielders went, but Carrick was always a mainstay in the middle of the park till the time he retired in 2018, as illustrated by the fact that was the club’s Players’ Player of the Year the last time they won the Premier League title.

An unsung hero, he always did the job required of him, albeit silently. And, by the time he had hung up his boots, Carrick had won every trophy there was to win. A true delight for any manager.

This was perhaps, the most difficult choice in the entire team. Pogba has been Manchester United’s best player since he returned to the club in 2016, but he has not always delivered. Ryan Giggs was a contender after playing as a central midfielder for much of the time upon the turn of the decade.  Pogba, though, edges Giggs on the basis of the impact he has made in the last three years or so.

Pogba is a world class midfielder on his day. (Photo by Gareth Copley/Getty Images)

The 2016-17 Player of the Season, he also made the tournament’s Squad of the Season that campaign. Last season, he scored an astonishing 16 goals from midfield and was named in the PFA Premier League Team of the Year. He may frustrate a lot, but there is no one quite like Pogba.

Nani was brilliant in the 2012-13 season, but Marcus Rashford pips him on the fact that he has been a pivotal part of the squad pretty much since his debut in 2016. Still all of 22, Rashford is now the leading light for Manchester United and has already outdone himself from the previous season midway through the current campaign.

As far as his impact is concerned, Rashford scored many-a-crucial goal in the lead-up to the Red Devils’ FA Cup triumph in 2016 before doing the same in the following season, which yielded a couple of trophies. And, nearly four years since his debut, it feels as if he has only just begun.

It was either van Persie or Anthony Martial for this spot. The Dutchman, though, takes it despite his brief stay at Old Trafford. In fact, van Persie makes the team solely on the basis of being the single most influential player in the Premier League when Manchester United won their last league title.

Bought for a mere £24 million, van Persie led the charge for Manchester United by scoring 26 goals in his debut season at the club, enabling them to win the title with four games to spare. His stock may have dropped under Louis van Gaal, but he was still the go-to man for David Moyes. An explosive striker unlike any Manchester United saw in the decade.

Is there any doubt as to this selection? By the time he left Manchester United in 2017, Rooney had become the club’s all-time leading top scorer, a 253-goal tally that will be hard to better. In 2011-12, Rooney scored 34 goals, even as Manchester United went trophyless. He was also crucial in the two Premier League triumphs, playing the support act to van Persie in 2012-13.

By the time he left the club, much like Carrick, Rooney had won the lot as well and he had also scored arguably the best goal of the decade – an incredible bicycle kick in the Manchester derby. Despite the controversies he was engulfed in, Rooney is a Manchester United legend in its truest sense. 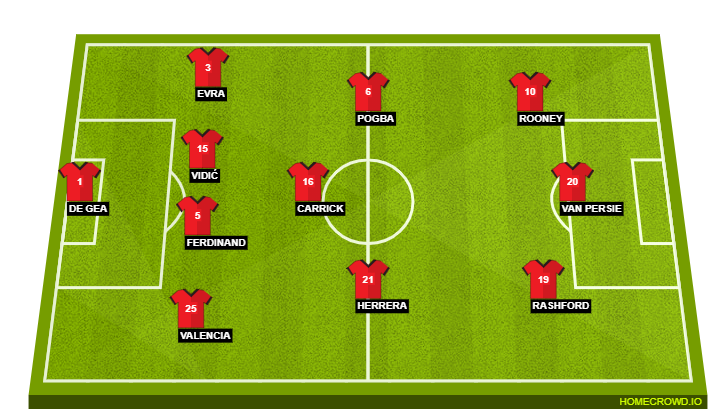