As we enter a new decade, The Hard Tackle takes a look at the best players to have represented Barcelona over the past ten years.

The last decade was quite a memorable one for Barcelona. We saw one of the best clubs side in the history of the game going through their heydays under Pep Guardiola. We saw the Catalan giants dominate Spanish football in quite a rampant manner.

Some of the greatest legends in football bade their farewells to the Camp Nou faithfuls while the star of the genius that is Lionel Messi has only gone on to soar further. It was a decade that saw some of the best ever don the Blaugrana and here at The Hard Tackle, we pick out the best team of the decade for Barcelona.

This was the most difficult pick in this team. Victor Valdes was a true stalwart for Barcelona and started the decade as a clean sheet machine, winning the Zamora Trophy thrice. However, for the kind of importance Marc-Andre ter Stegen has had in the squad for a couple of years now, there was no choice but to give the nod to the German goalkeeper.

Strong with the ball at his feet and excellent at his primary duties, ter Stegen was instrumental as Barcelona won the UEFA Champions League in his first season at the club. The German also has 12 other trophies to show for during his time at Camp Nou.

Most importantly, ter Stegen is someone who is as crucial to Barcelona’s results in most games as Lionel Messi on the other end. One of the best in the world.

One of the easier choices. That Barcelona have still not been able to adequately replace Dani Alves is enough for him to make this team. One of the best players in the world at his peak, Alves was instrumental in the way the modern day full-back operates.

Long before Trent Alexander-Arnold was tormenting the opposition defence from the right flank, it was Alves who was renowned for the same. The most decorated player in the history of the game, Alves walks into out Barcelona Team of the Decade.

A player who has more often than not been subjected to a lot of criticism from fans and rivals alike. Pique, though, has been every bit crucial to Barcelona’s success over the past decade as any player. After returning from Manchester United at the end of the previous decade, Pique honed his skills alongside Carles Puyol.

Having forged one of the most formidable central defensive partnerships in modern day football with the inspirational captain, Pique grew into one of the best defenders in the game. He then rose to the occasion once Puyol hung up his boots. Touted for the club’s presidency in the not too distant future, Pique is a Barcelona legend in every sense.

Perhaps, a controversial choice, especially with the other option being Barcelona’s eternal capitan, Puyol. Mascherano, though, edges Puyol because of the way he stepped up in the absence of the ageing-centre-back. In his very first season at Barcelona, Mascherano played much of the UEFA Champions League campaign at the heart of the defence, including in the final.

In fact, the veteran Argentine was forged a formidable central defensive partnership with Pique for much of his time at Camp Nou and the duo were quite instrumental in the 19 titles they won during his Barcelona stint. So much so, that Mascherano made the UEFA Champions League Team of the Season for 2014-15 and was Barcelona’s Player of the Year in 2013-14. A true gem.

A player who has made the left-back slot his own since rejoining Barcelona in 2012. An outstanding full-back, Alba has been one of the best in the trade for much of his stay at Camp Nou. There have been some lows along the way, but there is no denying the fact Alba walks into the side, considering the contribution he has made to the club’s success over the last 8 years.

Xavi might have only been at Barcelona for half of the decade gone by, but in those five years, his impact was nothing short of ridiculous. Alongside partner-in-crime Andres Iniesta and Lionel Messi, the club legend swept the podium for Ballon d’Or at the start of the decade and continued dominating the game till the time he called it quits at Camp Nou.

In his last five years with Barcelona, Xavi boasted a ridiculous pass accuracy of over 90 percent, helped the club to 11 trophies and ended his time at Camp Nou with a second treble. The man who made Barcelona tick and someone who was crucial to Messi’s exploits at the start of his career, Xavi is another automatic pick in our team.

This one is a no-brainer. Busquets has been holding midfield extraordinaire at Barcelona, someone who has redefined the role with his outstanding reading of the game and ball-playing abilities. The player who has enabled Xavi, Iniesta, Messi and the likes to dominate the opposition over the years, there is no doubt as to Busquets’s place in the side.

Would this team even be complete without Iniesta? Part of Barcelona’s phenomenal trifecta that ran roughshod over opponents not just in club football, but on international level as well. When on song, Iniesta ran rings around his counterparts. On most other days, he set play up elegantly and showed tremendous mastery of his craft. Truly an artist on the pitch.

Is there even going to be debate about this? The best player in Barcelona’s history and maybe the greatest footballer to even play the game. Messi is a player who carries Barcelona these days and was a part of a brilliant group at the start of the decade.

The deadly partnership. (Photo by Lluis Gene/AFP via Getty Images)

David Villa was a remarkable contributor when the 2010s began, but his impact barely measures up to Suarez’s. One of the most goal hungry players to ever don the famous Blaugrana strip, Suarez is on the verge of becoming Barcelona’s third all-time top scorer. Laszlo Kubala, who is ahead of him with three more goals, was at Barcelona for five years longer and played 79 more games.

Like Messi, Suarez has averaged more than a goal or assist per game in the decade gone by, which is simply ridiculous for a player who has been at the club for nearly six years. Another straightforward pick.

Acrimony and anti-climactic may be the words to describe Neymar’s exit from Barcelona, but he was simply undeniable during his four-year stay at Camp Nou. The Brazilian formed the wondrous MSN trio with Messi and Suarez and in the 450 games that they played together, they scored an astonishing 364 goals between themselves.

Much like Messi and Suarez, Neymar had more than a goal or an assist for Barcelona every game and was instrumental in notching up the club’s second treble in 2015. A simply sensational player. 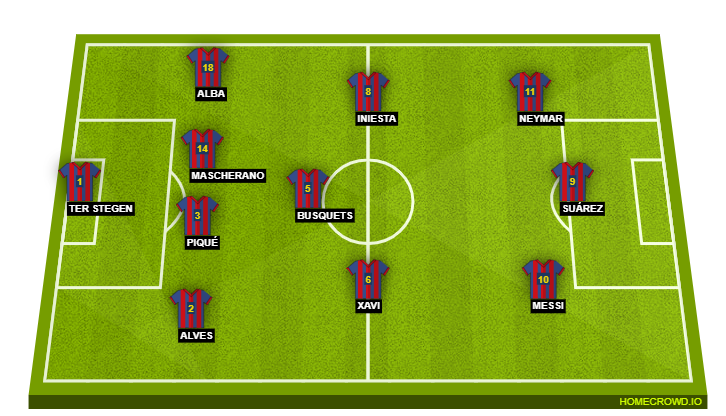 One Response to “THT Barcelona Team of the Decade – ter Stegen over Valdes; MSN feature”