Darwin Nunez will make his competitive debut for Liverpool, while Alisson Becker is fit to start when the Reds take on Fulham on Saturday.

Liverpool will look to kick-start the 2022/23 season strongly when they lock horns with Fulham at Craven Cottage in Saturday’s lunch-time kick-off. But Jurgen Klopp has several roster issues hampering his preparations ahead of his team’s season opener.

But there is some good news, with Alisson Becker recovering from his minor fitness concern to become available to take on Fulham on Saturday. And Klopp provided an update on every player dealing with an issue during his pre-match press conference.

“Ali [is] fine. We hope with Curtis we caught it in the right moment, that’s just how it is with young players. Naby is ill, but I think he will be back today the first day. I underestimated it a little bit when I said he will definitely be fine. He came in yesterday and still showed some little symptoms, no COVID but it is not right. I guess he will be back today.”

“Then Kostas [was] unlucky in a training situation. I saw him now, he was out on the pitch and he might be – in his opinion, anyway – ready to train next week, which is helpful. Ibou, in a challenge in the game against Strasbourg, what happened there we have to see how long it will take but he is out for a while. Oxlade [is also out], of course. [Kelleher] is still a few weeks away.”

“We have too many injuries, that’s true, but in the moment nothing changed. There were a lot of unlucky situations; started with Caoimhin, started with Diogo pretty much. One was injured, the other one got a re-injury, it was not 100 per cent clear. Diogo it was obviously slightly too early, or the injury was different in the first place. They are already fine and in a few weeks they will be back.”

Alisson should slot straight into the starting eleven, taking his place between the sticks. Liverpool will line up in a 4-3-3 formation in front of the Brazilian goalkeeper, with Virgil van Dijk, Joel Matip, Trent Alexander-Arnold and Andrew Robertson all being automatic picks.

Up ahead in midfield, there is no looking past Jordan Henderson, Fabinho, and Thiago Alcantara, with James Milner in line to make his 200th Premier League appearance for Liverpool. Finally, the offensive unit should have Darwin Nunez making his competitive debut for the Reds. 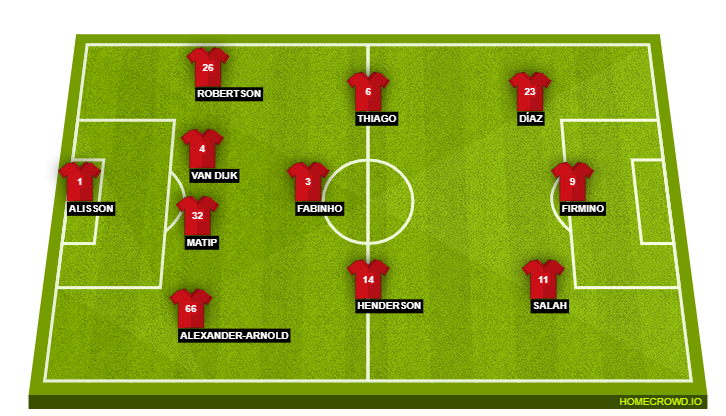 But Nunez will not make his full debut, with Roberto Firmino likely to start through the middle. Mohamed Salah and Luis Diaz will flank the Brazilian international, with Nunez an option off the bench along with another hopeful debutant Fabio Carvalho.