Virgil van Dijk and Sadio Mane will return, while Mohamed Salah will be in contention to feature when Liverpool and Wolves face off on Sunday.

Liverpool will hope to end their Premier League campaign by clinching the title when they play hosts to Wolverhampton Wanderers at Anfield on Sunday evening. And Jurgen Klopp should have a fully fit squad at his disposal ahead of his side’s final league game this term.

Virgil van Dijk, Fabinho and Mohamed Salah have all trained after recovering from their respective injuries. But the trio will face late fitness tests to determine their availability to take on Wolves on Sunday. Klopp gave a team news update during his pre-match press conference.

The Liverpool boss said, “It looks all good. What we do with them for the weekend I have no idea. I actually understand 100 per cent the goalscoring battle with Heung-min Son but we have no chance that we take any risks. But Mo doesn’t want to take any risks, there is no doubt about that.”

“It looks good but the boys make steps and we will see. My preferred solution would be that they all could play at the weekend for rhythm reasons, stuff like this, or at least could be on the bench and then we can bring them on or not, but they are involved. But if not, then we take it from there. I cannot say 100 per cent.”

Klopp also gave a positive update on Joe Gomez, who sustained an injury in the game against Southampton earlier this week. The Liverpool boss said, “Joe is first and foremost good news. Yesterday we had a reassuring further scan, but like we and he thought after the game, we were lucky. It was a proper knock but nothing happened.”

Gomez is unlikely to start even if he is fit to take on Wolves, with Trent Alexander-Arnold set to return at right-back. Andrew Robertson picks himself on the opposite flank, with van Dijk expected to be fit enough to start alongside Joel Matip at the heart of the Liverpool defence, which will cover Alisson Becker.

Up ahead in midfield, Jordan Henderson should return to the side to reprise the anchor role, with Thiago Alcantara likely to replace Curtis Jones. But Naby Keita will retain his place in the starting eleven, with James Milner dropping to the bench. 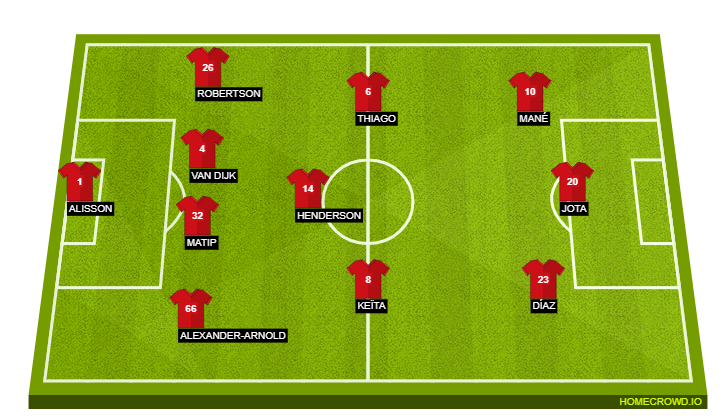 Salah will unlikely return to the starting eleven, with Klopp expected to reserve the Liverpool talisman as an option in the second half. In his stead, Luis Diaz should start on the right-wing, with Diogo Jota spearheading the Liverpool attack against Wolves. Finally, Sadio Mane will return to the side by replacing Roberto Firmino, starting on the left flank.