Mason Mount and Kai Havertz will return, while Antonio Rudiger will bid his farewell when Chelsea and Watford face off at Stamford Bridge on Sunday.

Chelsea will look to end their 2021/22 Premier League campaign positively when they play hosts to Watford at Stamford Bridge on Sunday evening. And Thomas Tuchel will be sweating over the fitness of a few first-team players ahead of his side’s latest fixture.

Ben Chilwell and Callum Hudson-Odoi remain long-term absentees for Chelsea. Keeping the game against Watford in mind, Tuchel will be concerned about the availability of Andreas Christensen, Mateo Kovacic and Timo Werner.

The Chelsea boss has not provided a team news update ahead of the game against Watford this weekend. But Tuchel spoke about the uncertainties surrounding the futures of a few players, including Christian Pulisic.

The Chelsea manager said, “If we stick to the group then we will try to solve it with these players. Is it necessary to bring more offensive players around the box to create more distraction, to create more space for each other? We will ask that question. Can we do better in the structure? Can we push the players more? Did we maybe rotate too much? Let’s see. There are a lot of options.”

“He’s [Pulisic] not that player who produced in the last three years 30 goals and it’s a matter of time until he is that kind of player. We will push him to the limit. We’re not pointing fingers but we struggle with over-performance in this area and our opponents have certain quality and efficiency on a normal level that is far beyond our level of goals and assists.”

Despite the words from Tuchel, Pulisic will drop out of the starting eleven, with Kai Havertz likely to come into the side. Mason Mount should also return, with Hakim Ziyech dropping to the bench. Romelu Lukaku will continue to spearhead the Chelsea attack against Watford on Sunday.

The midfield unit will likely remain unchanged amid Mateo Kovacic’s uncertain fitness situation. Jorginho and N’Golo Kante should thus pair up in the middle of the park again. The wing-backs will also retain their spots, with Reece James and Marcos Alonso starting on the flanks. 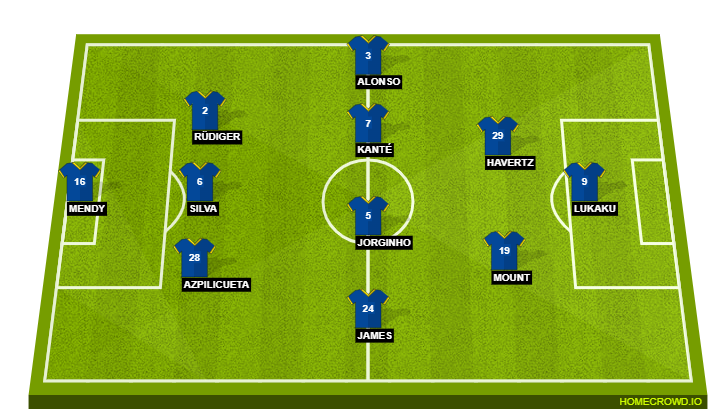 The only other change in the starting eleven should come in the central defensive unit, with Cesar Azpilicueta replacing Trevoh Chalobah for possibly his final Chelsea appearance. One player who will definitely turn out for the Blues one last time against Watford is Antonio Rudiger, who will join Real Madrid in the summer. Thiago Silva will complete the back three, with Edouard Mendy taking his place between the sticks.