Marcelo will return to the starting lineup, but David Alaba and Eder Militao will miss out when Real Madrid and Espanyol clash on Saturday.

Real Madrid will look to clinch the La Liga title when they play hosts to Espanyol at the Santiago Bernabeu on Saturday afternoon. But Los Blancos could have an uphill task in the game, with Carlo Ancelotti missing several important players ahead of his side’s latest fixture.

Defence is particularly an area of concern for the Real Madrid boss. That is because David Alaba is recovering from a muscle injury, while Eder Militao and Nacho will be serving their respective one-match suspensions. The three defenders have joined Eden Hazard (ankle) and Luka Jovic (groin) on the sidelines.

Carlo Ancelotti touched upon the subject of the injury crisis in defence and the possibility of resting players during his pre-match press conference. The Real Madrid manager said, “We have some issues in defence because we’re without Alaba, Nacho and Militão. I’ll give Vallejo a run-out; he’s played less minutes but he’s a fantastic professional.”

“Casemiro can play alongside him at centre-back. I have lots of options in the middle but I have fresh players in Camavinga and Ceballos, who have done a good job and are full of confidence. Asensio is fresh too and I’ll assess whether Karim can start another game and if he’s fully recovered I’ll be able to play him. I’ll put a team out capable of winning the game while avoiding any injuries to players who might be fatigued.”

While Casemiro is in the matchday squad and capable of playing as a centre-back, the Brazilian international will likely remain preserved for the crucial UEFA Champions League semi-final second leg against Manchester City next week. Jesus Vallejo will thus line up alongside academy product Mario Gila at the heart of the Real Madrid defence.

The remainder of the makeshift defensive unit will consist of Lucas Vazquez and Marcelo, with Dani Carvajal and Ferland Mendy in line for some rest. Vallejo, Gila, Vazquez and Marcelo will cover Thibaut Courtois in the Real Madrid goal.

Up ahead in midfield, Eduardo Camavinga will reprise the anchor role in Casemiro’s absence, with the Brazilian likely to make a second-half cameo appearance. Toni Kroos and Luka Modric could also do with some rest, meaning Dani Ceballos and Federico Valverde will complete the midfield unit. Meanwhile, Ancelotti touched upon the subject of resting Benzema and Vinicius Jr. 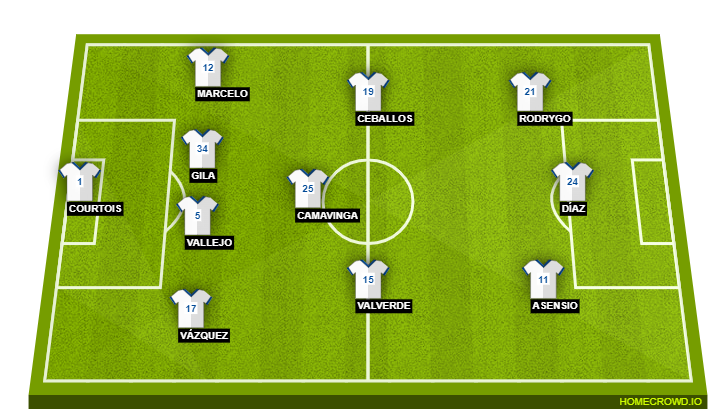 “Benzema and Vini Jr. could rest but I believe if a player has recovered well, they should play. The squad is in good health but if someone needs to rest, I’ll give them that. Not because it’s an easy game but because if a player hasn’t 100% recovered, there is a greater chance of them picking up an injury.”

Benzema and Vinicius Jr. will get a breather against Espanyol, with Mariano Diaz getting a rare start. Mariano will spearhead the Real Madrid attack on Saturday, with Rodrygo Goes and Marco Asensio completing the offensive unit.