Mohamed Salah and Thiago will return, while Trent Alexander-Arnold will be in contention to feature when Liverpool and Watford face off on Saturday.

Liverpool will hope to continue their brilliant winning run in the Premier League when they play hosts to Watford at Anfield on Saturday afternoon. And Jurgen Klopp barely has any fitness issues to deal with ahead of his side’s latest fixture.

The good news is that Trent Alexander-Arnold has resumed full training and could be in contention to feature against Watford after shrugging off a hamstring injury. But Naby Keita is struggling with a knee issue and could miss out, while James Milner is recovering from an illness.

Jurgen Klopp provided an update on Alexander-Arnold and Keita during his pre-match press conference, starting with Alexander-Arnold’s fitness, saying, “It will be tight for tomorrow but it’s possible after all I hear.”

“It’s different if you are part of team training, it depends what you could do before and he was really with our rehab and fitness department, it was really intense what he did before he trained with us. So physically, he [Alexander-Arnold] should be fine, now I have to make the decision about rhythm and these kinds of things.”

“Yesterday Naby couldn’t train, felt a little bit here and there. I don’t know exactly yet, nobody called me yet about Naby for today. So we will see how he is for today. Apart from that, we had them pretty much all available.” Klopp then proceeded to talk about the freshness of players involved in the international break and Andrew Robertson, who has recovered from COVID-19.

The Liverpool boss said, “He [Robertson] is fine. Fresh? I don’t know. Hendo didn’t play the second game, he is probably fresh. The Brazilians played, Mo and Sadio played 120 [minutes], Luis played both games, Diogo played both games – not full but nearly. They are fresh enough. It’s not a problem.”

Robertson should have regained enough fitness to start at left-back for Liverpool against Watford. But Klopp might preserve Alexander-Arnold for tougher excursions later this month, meaning that Joe Gomez will get a rare start at right-back. There is no looking past Virgil van Dijk and Joel Matip at the heart of the Liverpool defence, with Alisson Becker an automatic pick between the sticks.

Up ahead in midfield, Klopp has plenty of options to choose from, with Fabinho a certain starter at the base. Jordan Henderson and Thiago Alcantara should start alongside the Brazilian, with the duo relatively fresh following the international break. Curtis Jones and Harvey Elliott will be backup midfield options for the Liverpool boss to consider. 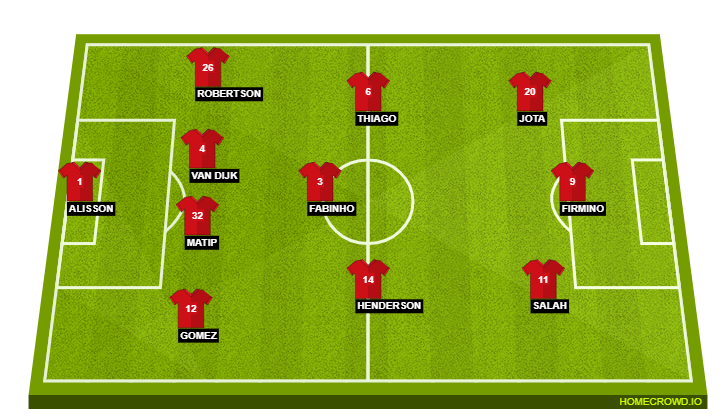 Finally, Klopp has all his resources available in attack, but Sadio Mane and Luis Diaz will likely get a rest after their midweek excursions. Mohamed Salah was also involved in a gruelling match but should make the starting lineup, with Roberto Firmino and Diogo Jota completing Liverpool’s offensive unit.