Cristiano Ronaldo and Raphael Varane will return, but Scott McTominay will miss out when Manchester United and Tottenham Hotspur face off on Saturday.

Manchester United will be desperate to return to winning ways when they play hosts to Tottenham Hotspur at Old Trafford on Saturday evening.

The good news is that Cristiano Ronaldo (hip) and Edinson Cavani (groin) have regained fitness and should be available to take on Tottenham. In addition, Raphael Varane should also be up for selection after recovering from his bout with COVID-19.

But Luke Shaw remains unavailable due to his ongoing recovery from the coronavirus. Scott McTominay is the other major absentee for Manchester United, with the Scottish midfielder on the sidelines due to a minor calf injury that needs to be assessed.

During his pre-match press conference, Rangnick provided an update on Shaw, McTominay, and Ronaldo, saying, “With regard to players, we will still miss out Luke Shaw. He’s, until yesterday, being tested positive with Covid, and Scotty is a question mark, he had some problems with his calf so we have to wait and see until after training today.”

“But, right now, it is more likely that he will not be available because if we risk him tomorrow, he will more likely be out for the game on Tuesday. That’s why I tend, with muscular issues – even more so if it’s the calf muscle – I tend to be careful.”

“Cristiano resumed training yesterday. He trained for the whole session and I expect him to be training today as well. He trained well, like the rest of the group, so I would have thought that he’s available for tomorrow. What’s important is that he and Edi are both back in training and are both available for the game.”

With Shaw still unavailable, Alex Telles picks himself as the left-back. But Diogo Dalot should return on the opposite flank, replacing Aaron Wan-Bissaka. Varane is also likely to earn a recall, pairing up with Harry Maguire at the heart of the Manchester United defence. There is no looking past David de Gea between the sticks.

Up ahead in midfield, McTominay’s absence will likely prompt Rangnick to deploy Paul Pogba in a deeper role alongside Fred, although Nemanja Matic is another option at the Manchester United interim manager’s disposal. 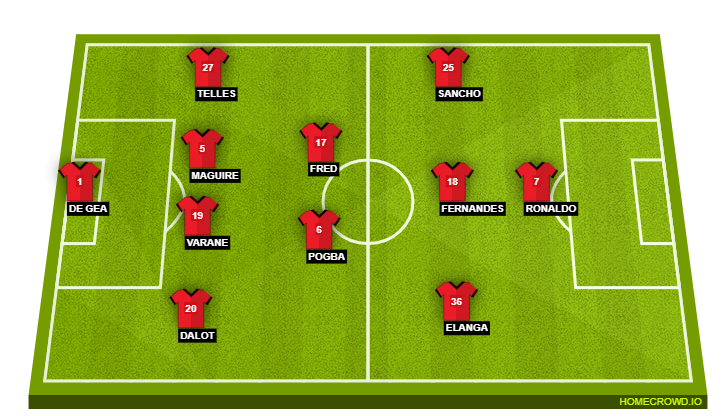 Bruno Fernandes will feature in his usual no. 10 role, with Jadon Sancho and Anthony Elanga expected to flank him in the final third. The fit-again Ronaldo will spearhead the Manchester United attack against Tottenham, leaving Marcus Rashford and Edinson Cavani as options on the bench.