Jordan Henderson and Luis Diaz will return, while Roberto Firmino will be in contention to feature when Liverpool and Brighton & Hove Albion face off.

Liverpool will look to get back to winning ways when they lock horns with Brighton & Hove Albion at the Amex Stadium on Saturday afternoon.

The good news is that Roberto Firmino has regained full fitness after training properly this week. But the Liverpool manager’s preparations for the game have been hampered by new issues with COVID-19. Virgil van Dijk, Ibrahima Konate, and Thiago Alcantara have reportedly missed training this week, and the trio could miss out against Brighton.

During his pre-match press conference, Klopp did not name the coronavirus absentees but provided a positive update on Firmino. The Liverpool boss said, “Yes, he is back. We had a few little things but so far nobody is out of training [due to fitness issues].”

Klopp was coy on the identity of the players who are COVID-19 concerns, saying, “We have on top of that, how everywhere, COVID is not over, so these kind of things we have as well – or had. We will see how that’s going on. Injury-wise, I think they all should be ready.”

While Konate would have missed out anyway, van Dijk will start if he has not tested positive for COVID-19. But if he is unavailable, Joe Gomez will pair up with Joel Matip at the heart of the Liverpool defence. Trent Alexander-Arnold and Andrew Robertson pick themselves as the two full-backs, while Alisson Becker is an automatic selection between the sticks.

Up ahead in midfield, Jordan Henderson is in line to return to the starting lineup after being benched for the midweek UEFA Champions League tie against Inter Milan. The Liverpool captain will line up alongside Fabinho and Naby Keita in the middle of the park, with Curtis Jones and Harvey Elliott backup options on the bench. 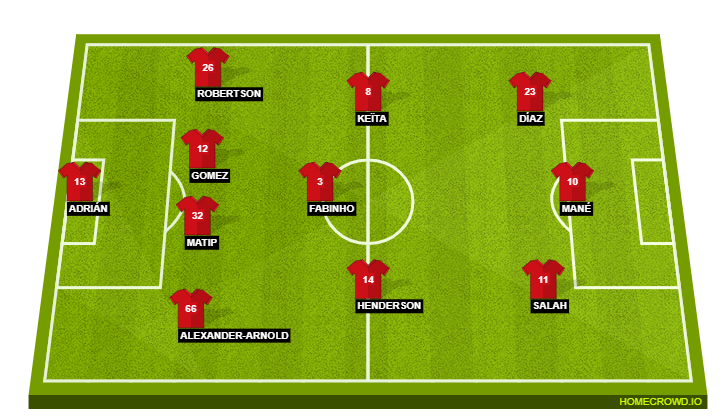 As for the offensive unit, Firmino’s return to fitness means Klopp has all his resources at his disposal. But while the Brazilian is in contention to feature, he is unlikely to start, with Mohamed Salah, Sadio Mane, and Luis Diaz forming the attack for Liverpool against Brighton. Diogo Jota and Firmino will be backup options for Klopp to consider later in the game.