Romelu Lukaku will return, but Reece James will miss out when Chelsea and Norwich City face off at Carrow Road on Thursday.

Chelsea will hope to continue their recent winning run when they lock horns with Norwich City at Carrow Road on Thursday night. And Thomas Tuchel has one new injury concern hampering his preparations ahead of his side’s latest fixture.

Reece James will be unavailable for the foreseeable future after sustaining a leg injury. The English international has joined wing-back partner Ben Chilwell on the sidelines. That said, Chilwell recently stepped on grass for the first time since undergoing knee surgery and has begun his rehabilitation process.

But there is some good news for Tuchel, with Cesar Azpilicueta (knock), Marcos Alonso (COVID-19), and Callum Hudson-Odoi (Achilles) likely to be fit and available after recovering from their respective issues. The trio should be in contention to take on Norwich City on Thursday.

Tuchel provided a team news update during his pre-match press conference, confirming that everyone except James and Chilwell trained on Wednesday. The Chelsea boss said, “Everybody was on the training pitch today except for Ben Chilwell and Reece James, who has some muscular problems after his three games.”

“He has muscular problems in his other leg, not the previously injured leg, but he will still need some further assessment. He felt it during the match and it didn’t get any better. Today there will be further examinations. It’s obvious what he can give to our team, so it is not good news at the moment.”

“Chilly was back out on the grass training and I think the one minute he was out on the grass they took a photo of him! The weather made it possible he could do the exercise outside and it was good to see, but he still has a long way to go. They made him smell the grass and get a bit excited, but nothing close to football or team training. There isn’t any chance he will be back before the end of the season.”

In James’ absence, Hudson-Odoi could get the nod for the right wing-back berth, with Saul Niguez likely to continue on the opposite wing after his impressive performance against Burnley this past weekend. The two wing-backs will flank Jorginho and Mateo Kovacic, with N’Golo Kante dropping to the bench for some rest.

As for the attacking unit, Romelu Lukaku could get a chance to impress after missing out against Burnley. Kai Havertz will make way for the Belgian striker before possibly returning to spearhead the Chelsea attack on the weekend versus Newcastle United. Mason Mount and Christian Pulisic should retain their spots, flanking Lukaku in the final third. 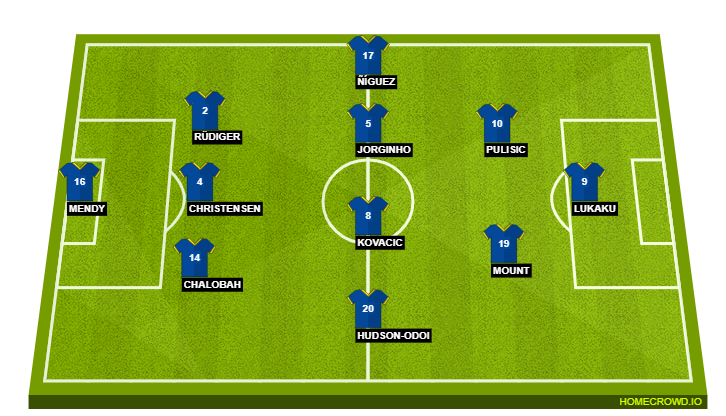 At the opposite end, the central defensive unit will consist of Andreas Christensen, Antonio Rudiger and Trevoh Chalobah, with Tuchel likely to rest Thiago Silva. Edouard Mendy will take his usual place between the sticks, with Kepa Arrizabalaga on the bench.