Mohamed Salah and Sadio Mane will return, but Joel Matip will miss out due to an illness when Liverpool and West Ham United face off on Saturday.

Liverpool will aim to continue their brilliant winning run when they play hosts to West Ham United at Anfield on Saturday evening. Jurgen Klopp has a couple of new roster issues to contend with ahead of his side’s latest fixture.

The major absentee for Liverpool will be Joel Matip, who is unavailable due to an illness. In addition to Matip, Thiago Alcantara and Roberto Firmino will also miss out due to their respective injuries.

Klopp is also sweating over the fitness of Curtis Jones (thigh) and Naby Keita (knock), with the duo set to undergo late fitness tests to determine their availability against West Ham. During his pre-match press conference, Klopp provided an update on his side’s absentees.

The Liverpool boss said, “I’m pretty sure that nobody will tell me differently because yesterday he didn’t train, Thiago will not be available for tomorrow. Curtis is not bad but if it is good enough to go again tomorrow, I don’t know.”

“Joel Matip is ill – no COVID, nowadays you can be ill in different ways as well – so he will not be available. Naby was not in the squad on Wednesday. Bobby is looking good but not good enough for the weekend. I think the plan is that he trains on Sunday, first time. That sounds then doable for Tuesday.”

In Matip’s absence, Ibrahima Konate will pair up with Virgil van Dijk at the heart of the Liverpool defence, with Trent Alexander-Arnold and Andrew Robertson being the two full-backs. Alisson Becker is a certain starter between the sticks for Liverpool against West Ham.

Up ahead in midfield, Jordan Henderson and Fabinho will return to the starting lineup after being rested for the FA Cup fifth-round clash against Norwich City earlier this week. The two experienced midfielders will likely start alongside Harvey Elliott in the middle of the park, with James Milner and Alex Oxlade-Chamberlain being backup options. 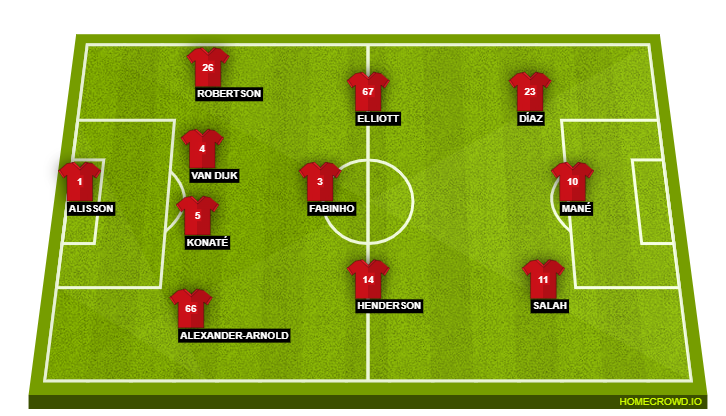 Finally, Klopp’s selection dilemma in attack will continue on Saturday, with Sadio Mane, Mohamed Salah, Luis Diaz and Diogo Jota vying for three spots. Salah, Mane and Diaz are the likeliest candidates to start after being given a breather of some form in the midweek cup tie.