Diogo Jota and Harvey Elliott will return to the starting lineup, but Thiago Alcantara will miss out when Liverpool and Norwich City face off in the FA Cup.

Liverpool will hope to seal a safe passage through to the FA Cup quarter-finals when they play hosts to Norwich City at Anfield for the fifth round tie on Wednesday night. Jurgen Klopp does not have any new injury concern to deal with ahead of his side’s latest fixture.

Thiago Alcantara remains unavailable due to the hamstring injury he sustained while warming up ahead of the Carabao Cup final against Chelsea this past weekend. Apart from the Spanish international, Roberto Firmino is also expected to miss out again, although he is closing in on his return.

During his pre-match press conference, Klopp provided an update on Thiago while ruling him out of Wednesday’s FA Cup fixture against Norwich. The Liverpool boss said, “It was a very emotional moment.”

“We were all surprised; I came in the dressing room, I watched the whole warming up and didn’t see anything, then we came in, he is on the [treatment] bed and the physios tell me he feels something in the hamstring, which is not good. He’s fine again but not fit again. Like always, you don’t know [how long he will be out] exactly. Weekend not sure, maybe Milan, after that definitely.”

While Thiago is a confirmed absentee due to his injury, Caoimhin Kelleher will also play no part against Norwich City despite his heroics in the Carabao Cup final. Klopp explained his decision during his presser, suggesting the Irishman needs to be rested after his physical and mental exertion.

The Liverpool manager said, “He had 120 minutes. You asked me last week if he would play before, that he gets some rhythm and I said, ‘No, he’s used to the situation that he just comes on and has to play.’  He’s not used to 120 minutes and being the hero. There’s no need to stress the situation now. No, he will not start tomorrow.”

In Kelleher’s absence, Adrian could be in line for a rare berth in the starting lineup, with Liverpool lining up in a 4-3-3 formation against Norwich City. Ibrahima Konate and Joe Gomez should form the central defensive partnership, with Conor Bradley and Kostas Tsimikas being the two full-backs.

Up ahead in midfield, Klopp will choose a mixture of youth and experience while resting Jordan Henderson and Fabinho. James Milner will sit at the base of the midfield, with Harvey Elliott and Curtis Jones expected to be the two box-to-box midfielders. 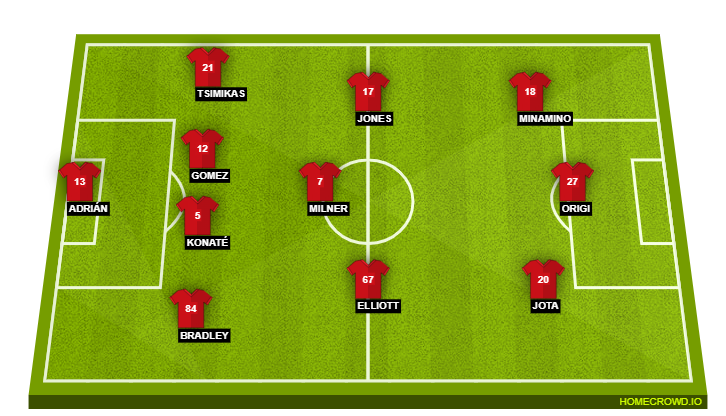 As for the attacking unit, Klopp has nearly all his resources at his disposal. But the game will give the Liverpool boss the chance to rest Mohamed Salah and Sadio Mane. In their stead, Divock Origi and Takumi Minamino will make rare starts, with Diogo Jota likely to get the nod over Luis Diaz in the final berth.