Anthony Elanga will replace Marcus Rashford, while Scott McTominay is unavailable due to an illness ahead of Manchester United’s game against Watford.

Manchester United will hope to return to winning ways when they play hosts to Watford at Old Trafford on Saturday afternoon. Ralf Rangnick has no new roster issues hampering his preparations ahead of his side’s latest fixture.

Scott McTominay remains unavailable due to an illness, while Edinson Cavani is sidelined due to a groin injury. In addition to the duo, Mason Greenwood will also not be available for selection as he is indefinitely suspended by Manchester United.

Rangnick confirmed McTominay and Cavani’s absences during a conversation with the Manchester United media, confirming that the situation has not changed much. The Manchester United interim boss said, “The situation is exactly the same. He [Cavani] hasn’t been training with us so he won’t be available for tomorrow’s game and the same is true with Scotty.

With McTominay out due to an illness, Fred will once again line up as the holding midfielder for Manchester United in their hybrid 4-3-3 setup. Paul Pogba will sit deep alongside Fred, with Bruno Fernandes given a free role in the middle of the park.

Cavani’s continued absence means Rangnick has no option but to field Cristiano Ronaldo as the central striker. Ronaldo will spearhead the Manchester United attack against Watford, with Jadon Sancho and Anthony Elanga being the two wide men. Elanga will likely replace Marcus Rashford in the starting lineup following his bright cameo against Atletico Madrid earlier this week. 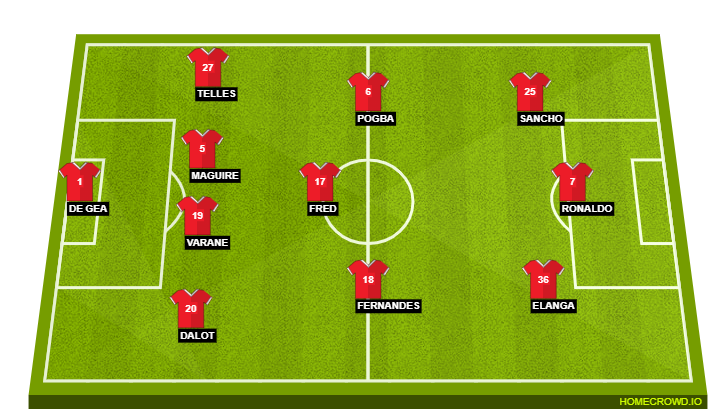 As for the defensive unit, a couple of changes could be on the cards, with Diogo Dalot and Alex Telles likely to replace Victor Lindelof and Luke Shaw as the two full-backs. Raphael Varane and Harry Maguire will continue pairing up at the heart of the Manchester United defence, with David de Gea an automatic pick between the sticks.