You are here: Home » news » Predicted Barcelona lineup against Napoli: Pique to return; Pedri in for Gavi
Football News 24/7

Gerard Pique and Pedri will return, while Gavi will drop to the bench when Barcelona and Napoli face off in the UEFA Europa League on Thursday.

Barcelona will aim to qualify for the UEFA Europa League Round of 16 when they lock horns with Napoli at the Diego Armando Maradona Stadium on Thursday night. And Xavi Hernandez has been handed a major boost on the team news front ahead of his side’s latest fixture.

After being suspended for Barcelona’s La Liga outing against Valencia this past weekend, Gerard Pique is available to take on Napoli. The veteran defender’s return leaves Alejandro Balde (ankle), Samuel Umtiti (foot), Clement Lenglet (hamstring), Ansu Fati (hamstring) and Memphis Depay (hamstring) as the only players on the sidelines and excluded from the travelling squad.

In addition, Dani Alves is also unavailable after being omitted from the Europa League squad. In Alves’ absence, Sergino Dest picks himself as Barcelona’s right-back against Napoli, particularly after an improved performance against Valencia.

Jordi Alba is a certain starter on the opposite flank, while the returning Pique will pair up with Ronald Araujo at the heart of the Barcelona defence. Behind the four defenders, Marc-Andre ter Stegen is an automatic pick between the sticks.

Up ahead in midfield, a change could be in the offing, with Pedri likely to replace Gavi. During his pre-match press conference, Xavi was quizzed about the impact of La Masia graduates on his side, and the Barcelona boss had a glowing reply in store.

“We count on La Masia a lot. We have won titles when we have had players from our academy. That’s why the likes of Gavi, Nico or the veterans like Busquets or Pique are important. We are seeing that players who are 17-18 can make a difference.”

But despite his positive performance against Valencia, Gavi will make way for Pedri, who will join Frenkie de Jong and Sergio Busquets in the middle of the park. Gavi and Nico Gonzalez will be backup midfield options on the bench for Barcelona. 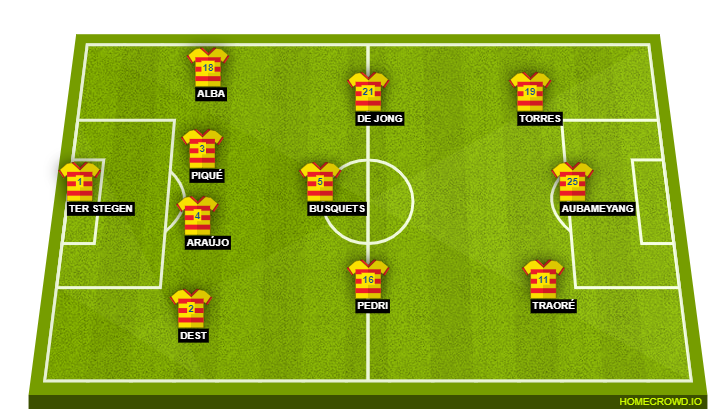 As for the attacking unit, Pierre-Emerick Aubameyang is indispensable after scoring a match-winning hat-trick against Valencia. Aubameyang will spearhead the Barcelona attack, with Ferran Torres and Adama Traore likely to be the two wide men. Ousmane Dembele will thus drop to the bench and will be an impact substitute.