Mateo Kovacic and Timo Werner will return, while Cesar Azpilicueta will be in contention to feature when Chelsea and Lille face off on Tuesday.

Chelsea will aim to take a step towards sealing a safe passage through to the UEFA Champions League quarter-finals when they play hosts to Lille at Stamford Bridge on Tuesday night. And Thomas Tuchel has been handed a boost on the team news front ahead of his side’s latest fixture.

Cesar Azpilicueta and Mason Mount have resumed training after overcoming their respective fitness issues. The duo will be in contention to take on Lille on Tuesday, with their return leaving Callum Hudson-Odoi (knock), Reece James (hamstring), and Ben Chilwell (knee) as the only major absentees for Chelsea.

During his pre-match press conference, Tuchel provided an update on Azpilicueta and Mount’s fitness while also speaking about Hudson-Odoi’s recovery progress. The Chelsea boss said, “Azpi looks much better than Callum.”

“Callum did not train yesterday but Azpi trained and had no reaction so if it stays like this then he’s available for tomorrow. Mason did a very good individual session. He will try to come back to team training today but he was out maybe a little bit too long to start. Perhaps he is involved with the squad but he has not trained with the team yet.”

Despite rejoining training, Azpilicueta will likely miss out against Lille, with Andreas Christensen once again starting as a right-back. Thiago Silva and Antonio Rudiger will pair up at the heart of the Chelsea defence, with Malang Sarr resuming his duties at left-back. The defensive quartet will cover Edouard Mendy in the Chelsea goal.

Up ahead in midfield, Mateo Kovacic is in line to return to the starting lineup, especially with Tuchel expected to persist with the 4-3-3 formation. The Croat will link up with Jorginho and N’Golo Kante in the middle of the park.

As for the attacking unit, much has been made about Romelu Lukaku’s dreadful performance against Crystal Palace this past weekend. And Tuchel backed the Belgian international to come good sooner or later.

“Every style changes with long-term injuries of key players. We played the majority of our games in a back three with wing-backs and two of the key wing-backs are Reece and Chilly, who got injured at their peak level. They had a huge impact on our game offensively and defensively regarding Romelu with their runs, speed, penetration and their deliveries. It’s on me to adapt and find solutions and Romelu will always be part of the solution.”

“We have to deal with it. There is data out there and the data speaks a certain language. He was not involved in our game [against Palace], sometimes it’s like this with strikers if they struggle a bit with self-confidence or to find the space and get involved against a good defensive side. It’s not what we want and not what Romelu wants but it’s not the time to laugh about him and make jokes. He is in the spotlight and we will protect him because he’s our player.” 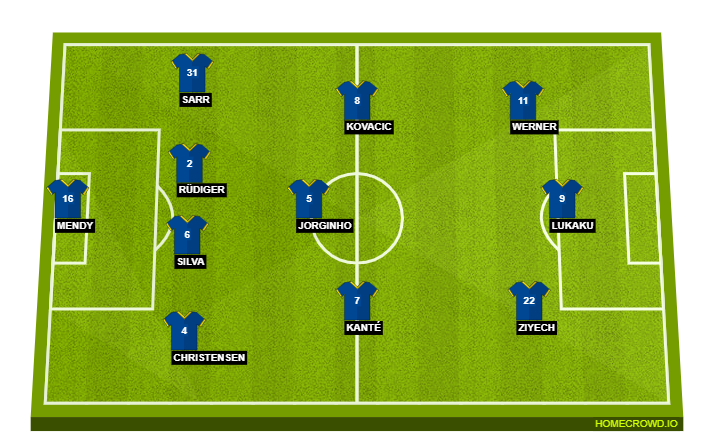 With Tuchel putting his weight behind supporting Lukaku, the Belgian striker will spearhead the Chelsea attack again on Tuesday. Timo Werner and the in-form Hakim Ziyech will accompany Lukaku in the final third, with Christian Pulisic, Kai Havertz and Mount being possible backup options on the bench.

One Response to “Predicted Chelsea lineup against Lille: Kovacic, Werner to return; Azpilicueta in contention”