You are here: Home » news » Predicted Barcelona lineup against Valencia: Gavi in for Aubameyang; Araujo in contention
Football News 24/7

Gavi will replace Pierre-Emerick Aubameyang, while Ronald Araujo will be in contention to feature when Barcelona and Valencia face off on Sunday.

Barcelona will be keen to reclaim the fourth spot on the La Liga table when they lock horns with Valencia at the Mestalla on Sunday afternoon. Xavi Hernandez has been handed a major boost on the team news front ahead of his side’s latest fixture.

After recovering from a calf injury, Ronald Araujo is fit and available, with the Uruguayan defender included in the travelling squad. But Clement Lenglet, Samuel Umtiti, Sergi Roberto, Memphis Depay and Ansu Fati remain in the treatment room, while Dani Alves and Gerard Pique are suspended.

During his pre-match press conference, Xavi spoke about Araujo’s recovery, saying, “We are optimistic with Araujo. He wants to be there, he has a lot of commitment and depends on the sensations of training, but we hope to have him tomorrow. If there is nothing unusual, he will be able to be there.”

Xavi was also asked to provide an update on Depay, with the Barcelona boss replying, “We are waiting for Memphis. He had a relapse and is practically ready. If it isn’t tomorrow it could be at Napoli or against Athletic Club but we are already waiting for him and his return will be good news.”

Araujo is unlikely to make the starting lineup despite regaining fitness as Xavi will have one eye on the all-important UEFA Europa League clash against Napoli on Thursday. As a result, Eric Garcia will have Oscar Mingueza as his central defensive partner, with Sergino Dest and Jordi Alba starting as the two full-backs. Marc-Andre ter Stegen is an automatic pick between the sticks.

Up ahead in midfield, Sergio Busquets should be back in the starting lineup after being excluded from the eleven earlier this week. Busquets will sit at the base of the midfield, with Frenkie de Jong and Pedri starting alongside the Barcelona captain. 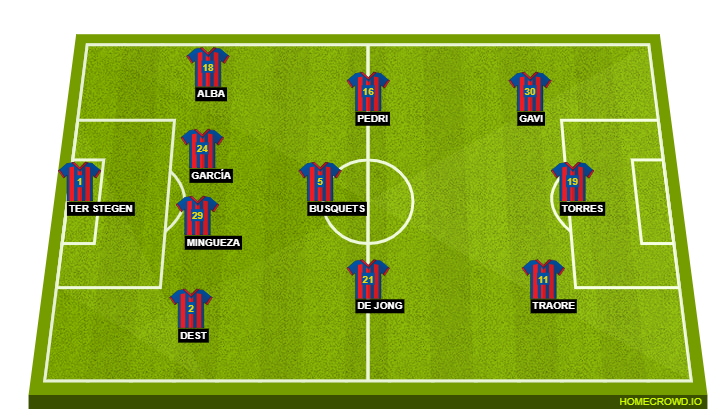 Finally, there is likely to be one change in the attacking unit, with Gavi coming in for Pierre-Emerick Aubameyang. The teenage prodigy will line up alongside Ferran Torres and Adama Traore in the final third, leaving Aubameyang and Ousmane Dembele among the backup options on the bench.

2 Responses to “Predicted Barcelona lineup against Valencia: Gavi in for Aubameyang; Araujo in contention”