You are here: Home » news » Predicted Liverpool lineup against Norwich City: Diaz in for Mane; Jota ruled out
Football News 24/7

Diogo Jota is ruled out, while Luis Diaz will replace Sadio Mane when Liverpool and Norwich City face off at Anfield on Saturday afternoon.

Liverpool will aim to keep their winning run going when they play hosts to Norwich City at Anfield on Saturday afternoon. Jurgen Klopp has a new injury concern to contend with ahead of his team’s latest fixture.

Diogo Jota is ruled out for the game against Norwich City after sustaining an ankle injury in the UEFA Champions League contest with Inter Milan earlier this week. Otherwise, Klopp has a fully fit squad at his disposal, meaning he could make a few changes on Saturday.

During his pre-match press conference, Klopp provided an update on Jota, revealing that the Portuguese international will not feature against Norwich. But the Liverpool boss added that he is waiting for further information before determining the extent of Jota’s injury.

“No, he will not be available but the extent is still not clear,” explained Klopp. “We need further assessment. It’s something with some ligaments in and around the ankle, but not the ligament, some others. And so, pretty much everything is possible in the moment: that it will go really quick and the other way around unfortunately as well. So we have to wait.”

“Everybody saw the picture with him in the boot, it’s a normal procedure; even when you just feel something they put you in that boot. For the weekend, for sure not.”

Klopp also provided further team news during his presser, adding: “All the rest, we don’t know yet. We have actually to wait. The information you get the day after the game are the injuries. The information you get two days after the game are the little niggles, where the players still feel it and you cannot use them. So, we are not even at that point. At this moment in time I have no idea who we can line up. Yes, we should have good options, but we don’t know.”

Alisson Becker should take his customary spot between the sticks, with Liverpool lining up in a 4-3-3 formation in front of him. Joel Matip should return to the starting lineup in place of Ibrahima Konate, pairing up with Virgil van Dijk at the heart of the Liverpool defence. Trent Alexander-Arnold and Andrew Robertson pick themselves as the two full-backs.

Up ahead in midfield, Naby Keita is in line for a starting berth. Jordan Henderson should also return to the lineup, with the Liverpool captain and Keita starting alongside Fabinho in midfield. 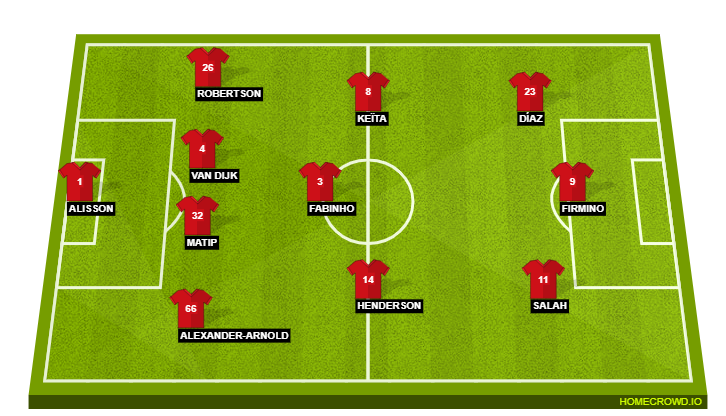 Finally, Klopp has plenty of options to choose from in the final third despite Jota’s absence. The Liverpool boss could recall Luis Diaz to the starting lineup, with the Colombian attacker replacing Sadio Mane. Mohamed Salah and Roberto Firmino will likely be the other two candidates to fill the attacking spots.

One Response to “Predicted Liverpool lineup against Norwich City: Diaz in for Mane; Jota ruled out”