You are here: Home » news » Predicted Manchester United lineup against Southampton: Lindelof in for Maguire; Elanga to return
Football News 24/7

Victor Lindelof could replace Harry Maguire when Manchester United and Southampton face off at Old Trafford on Saturday.

Manchester United will hope to get their top-four chase back on track when they play hosts to Southampton at Old Trafford on Saturday afternoon.

Nemanja Matic is unavailable to face Southampton due to a shin issue that has been bothering him for some time. The Serb has joined Eric Bailly (ankle) and Fred (COVID-19) on the sidelines, while Mason Greenwood is suspended until further notice. Alex Telles might be in contention to feature after testing negative for the coronavirus.

Rangnick provided a team news update during an interview with the Manchester United media, saying, “Alex resumed training yesterday. He might be available, I’ll have to speak to him after training today about how he feels because he was out for one and a half, almost two weeks but he took part in training yesterday.”

“The three players who will not be available tomorrow are still Eric Bailly, Fred, obviously because he was still testing positive, and Nemanja Matic. He has some problems with his shin.”

“He has been having these problems for the last couple of days, almost a week. He was still available, but he couldn’t train for the last two training sessions and he also won’t be training today. Those are the three players that are not available for the game tomorrow.”

While Telles could be ready to take the field, Luke Shaw will likely get the nod in the left-back slot, with Diogo Dalot a certainty on the opposite flank. Rangnick could bring Victor Lindelof back in place of Harry Maguire at the heart of the Manchester United defence, even though he backed the Manchester United captain during his pre-match press conference.

Lindelof and Raphael Varane should form the central defensive partnership, with David de Gea taking his usual place in goal. Up ahead, Scott McTominay will be the sole defensive midfielder in the absence of Fred and Matic. The Scotsman will be partnered with Bruno Fernandes and Paul Pogba, with the duo providing the creative threat. 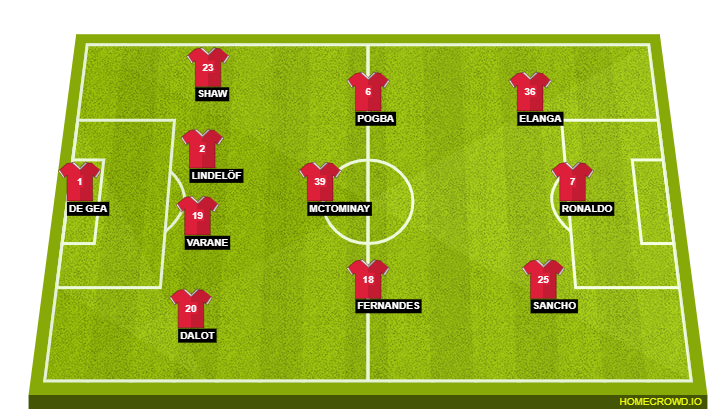 The only other change in the starting lineup will come in the final third, with Marcus Rashford likely to make way for Anthony Elanga. The Swede will join Jadon Sancho and Cristiano Ronaldo in the attacking unit, with Rashford, Edinson Cavani and Jesse Lingard being backup options.