Harvey Vale, Lewis Hall and Saul Niguez should return to the starting lineup when Chelsea and Plymouth Argyle face off on Saturday.

Chelsea will hope to seal safe passage through to the fifth round of the FA Cup when they play hosts to Plymouth Argyle at Stamford Bridge in a fourth round tie. Thomas Tuchel’s roster issues have eased up greatly ahead of his side’s latest fixture.

Only five players are unavailable for Chelsea, with Edouard Mendy still at the Africa Cup of Nations ahead of the final between Senegal and Egypt, while Christian Pulisic has not returned in time from the international break. The other absentees are Reece James (hamstring), Ben Chilwell (knee) and Ruben Loftus-Cheek (knock).

During his pre-match press conference, Tuchel confirmed the list of absentees while also giving a timeline of James’ comeback from injury. The Chelsea boss said, “We have no Reece James, no Ben Chilwell and no Ruben Loftus-Cheek, they are still injured. Everybody else has been training except Thiago Silva and Christian Pulisic so it was a good training week.”

“It’s very rare that we have four training sessions to prepare a match and it’s nice to have a bit more physical input than normal. He [James] needs some time in team training to get the rhythm and confidence back so he won’t travel with us tomorrow. I’ve been a manager for too long to have a feeling for injuries and not to get over-excited by pure dates that are maybe out there. I know we can have setbacks and it can take long sometimes.”

With James still out injured, Cesar Azpilicueta will start as the right wing-back. On the opposite flank, Kenedy could get a chance to impress, with Marcos Alonso getting some extra time off. The two full-backs will flank Saul Niguez and Mateo Kovacic in the middle of the park.

Chelsea’s defensive unit will bear a youthful look, with Lewis Hall, Trevoh Chalobah and Malang Sarr likely to start. Hall, in particular, will aim to continue from where he left off against Chesterfield in the FA Cup third round. The three centre-backs will provide cover for Marcus Bettinelli in the Chelsea goal. 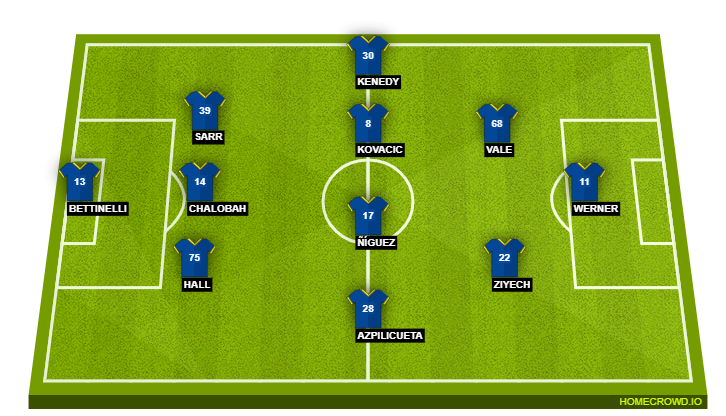 At the opposite end of the pitch, Timo Werner could spearhead the Chelsea attack against Plymouth Argyle instead of Romelu Lukaku. Hakim Ziyech and Harvey Vale should accompany the German international, with the latter getting another chance to impress. Mason Mount, Callum Hudson-Odoi, Kai Havertz and Lukaku will be options on the bench.