Marcus Rashford and Luke Shaw will return, while Paul Pogba will be in contention to feature when Manchester United and Middlesbrough meet on Friday.

Manchester United will aim to book their place in the FA Cup fifth round when they play hosts to Middlesbrough at Old Trafford in the fourth round tie on Friday night. And Ralf Rangnick has a few roster issues hampering his preparations ahead of his side’s latest fixture.

Anthony Martial and Donny van de Beek have embarked on short-term loan stints at Sevilla and Everton, respectively, and will not be in contention until next season at the earliest. On top of that, Mason Greenwood will not feature for Manchester United until further notice due to issues off the field.

Jesse Lingard and Edinson Cavani also miss out, even though both players are fit. The latter will be returning late from international duty, while the former needs some time off after failing to secure a deadline day move away from Manchester United.

The other absentees for Manchester United are centre-backs Victor Lindelof (illness) and Eric Bailly (ankle). But there is some good news, as Paul Pogba is in contention to feature against Middlesbrough after recovering from a hamstring injury. Rangnick provided an update on Pogba during his pre-match press conference.

“Victor Lindelof has been ill the whole week and not training. So he will also miss tomorrow’s game. The same is true with Jesse [Lingard], he asked me and the club if we could give him a couple of days off, just to clear up his mind. He will be back in the group I suppose next Monday, back for training, and then be a regular part of the whole squad again. Eric Bailly came back yesterday. He has some problems, a swollen ankle, and will therefore not be a part of the squad tomorrow.”

With Lindelof and Bailly unavailable, Raphael Varane and Harry Maguire pick themselves at the heart of the Manchester United defence. Out wide, Diogo Dalot and Luke Shaw should start as the two full-backs, with David de Gea taking his place in goal.

Up ahead in midfield, Nemanja Matic could be handed a rare start ahead of Fred, with Scott McTominay and Bruno Fernandes taking their usual places in the middle of the park. Pogba will thus be given game-time sometime in the second half. 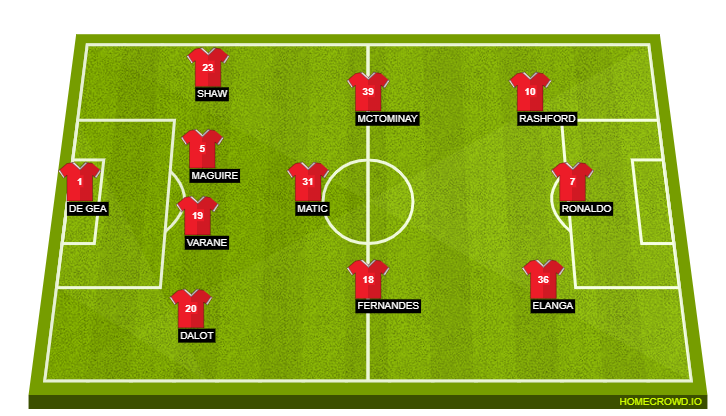 As for the attacking unit, Rangnick is down to his bare-bones when it comes to options at his disposal in the absence of Greenwood, Lingard and Cavani. Cristiano Ronaldo will thus lead the line for Manchester United against Middlesbrough, with Marcus Rashford and Anthony Elanga starting alongside him in the final third.