You are here: Home » news » Predicted Liverpool lineup against Crystal Palace: Alisson to return; Konate in for Matip
Football News 24/7

Alisson Becker and Ibrahima Konate will return to the starting lineup when Liverpool and Crystal Palace face off at Selhurst Park on Sunday.

Liverpool will have the chance to close the gap to Manchester City to nine points when they lock horns with Crystal Palace at Selhurst Park on Sunday afternoon. On Saturday, the Premier League champions dropped two points against Southampton, giving the Reds a glimmer of hope in the Premier League title race.

Jurgen Klopp has no new major injury concerns hampering his preparations heading into his team’s latest fixture. Joel Matip and Fabinho have been recovering from minor knocks, but the Liverpool manager suggested in his pre-match press conference that both players should be available to take on Crystal Palace. Klopp also provided an update on Alex Oxlade-Chamberlain.

“No, Joel was not tactical,” Klopp said. “My God, how good was Joel. We thought something is not 100 per cent right and you can change five times, it’s not a situation where you ask, ‘What [can we do?]’ – we had Ibou and Joe on the bench, so we just changed. Nothing else. The rest as far as I know were only knocks. Yes, we got knocks, proper knocks.”

“Wow, second yellow from Partey against Fabinho, that was a proper knock. I didn’t hear anything so that’s most of the time positive, but sometimes I get surprised after the press conference. But I don’t know anything else. Ox, we hope and pray, he was running yesterday [Thursday] but we don’t know what that exactly means for today. It would be helpful if he could train before the game. I don’t know yet.”

Matip and Fabinho’s availability means Nathaniel Phillips (fractured cheekbone), Thiago Alcantara (hip) and Divock Origi (knee) are the only players still in the treatment room. Harvey Elliott has resumed training after recovering from an ankle injury but will likely be eased back into action. Naby Keita (Guinea), Sadio Mane (Senegal) and Mohamed Salah (Egypt) are still at the Africa Cup of Nations.

Despite Matip’s availability, Ibrahima Konate is likely to come into the starting lineup to replace him as Virgil van Dijk’s central defensive partner. Trent Alexander-Arnold and Andrew Robertson will continue as the two full-backs. Behind the four defenders, there is no looking past Alisson Becker in the Liverpool goal despite Caoimhin Kelleher’s heroics against Arsenal.

Up ahead in midfield, Curtis Jones’s run in the starting lineup will continue. The English under-21 international will line up alongside Jordan Henderson and Fabinho in midfield, leaving James Milner as the backup option on the bench. 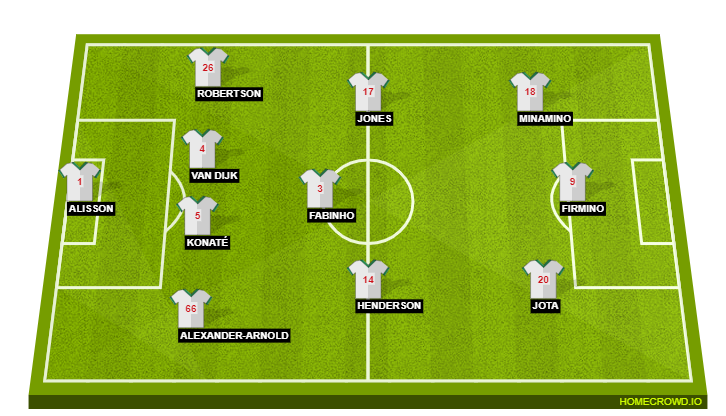 Finally, Takumi Minamino, Diogo Jota, and Roberto Firmino are automatic picks in the final third, with Klopp’s options in the attacking unit also depleted. Kaide Gordon and Tyler Morton will be among the younger players who could get a chance to impress in the second half.