Cristiano Ronaldo and Marcus Rashford will be in contention to feature when Manchester United and Brentford face off on Wednesday.

Manchester United will aim to bounce back to winning ways when they lock horns with Brentford at the Brentford Community Stadium on Wednesday night. And Ralf Rangnick has been handed a double boost on the team news front ahead of his side’s latest fixture.

During his pre-match press conference, Rangnick confirmed that Ronaldo and Rashford would be in contention to feature against Brentford. But at the same time, the Manchester United interim boss exercised caution while speaking about Anthony Martial’s possible involvement.

“Cristiano and Marcus were training yesterday, so we will train today,” said Rangnick. “But in the press conference before the Villa game, I was also convinced Cristiano would be available and he wasn’t. So we have to wait for the training session today in an hour’s time. I think they both could be available.”

“He [Martial] didn’t train yesterday and the day before yesterday. He will probably train today. After, I will take the decision if he is nominated or not. We’ll see what happens.”

With Wan-Bissaka unavailable, Diogo Dalot is certain to feature as the right-back for Manchester United. Shaw could replace Alex Telles on the opposite flank, while Harry Maguire might be in line to be reinstated at the heart of the Manchester United defence alongside Raphael Varane. In goal, David de Gea is an automatic pick.

Up ahead in midfield, McTominay is likely to start alongside Fred in the double-pivot, with Bruno Fernandes playing in the advanced midfield position. Manchester United will essentially be set up in a 4-3-3 formation without the ball, with Bruno Fernandes having a free role when in possession. 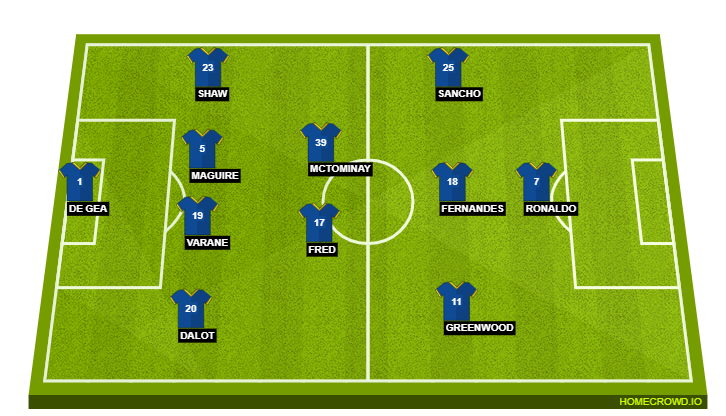 Rashford will likely appear later in the game as a substitute, but the starting lineup should feature Jadon Sancho and Mason Greenwood, with Anthony Elanga dropping to the bench. Ronaldo should be fit enough to start, with Edinson Cavani making way for the Portuguese forward.