You are here: Home » news » Predicted Chelsea lineup against Chesterfield: Loftus-Cheek to start in heavily rotated side
Football News 24/7

Ruben Loftus-Cheek will return in a heavily rotated side when Chelsea and Chesterfield face off in the FA Cup third round on Saturday.

Chelsea will aim to secure safe passage through to the FA Cup fourth round when they play hosts to Chesterfield at Stamford Bridge on Saturday evening. Thomas Tuchel does not have any new roster issues to contend with ahead of his side’s latest fixture.

The Chelsea manager still has over half a dozen players unavailable due to fitness issues or positive COVID-19 tests. The most notable absentees are Thiago Silva (COVID-19), Ben Chilwell (knee), Reece James (hamstring) and N’Golo Kante (COVID-19), while Edouard Mendy is in Cameroon representing Senegal at the Africa Cup of Nations.

The good news is that Cesar Azpilicueta (cramp) and Kai Havertz (dislocated finger) are available after sustaining minor issues in the Carabao Cup semi-final first leg against Tottenham Hotspur earlier this week. During his pre-match press conference, Tuchel provided a team news update.

“There is not so much injury news, which might be a good thing!” said Tuchel. “None of the long-term injured players will come back for this game but otherwise we are looking okay at the moment. From the game the other night, Azpilicueta only had a bit of cramp so no injury and he is fine. Kai’s finger is pretty much okay to play football, so our doctors and physios will take care of him.”

Tuchel was also quizzed about what the composition of his team might be, to which he responded, “We have to find a good balance. We have to be fair to guys who are playing after injuries or Covid, and also have a mix with guys who are used to having minutes in the last games.”

“We want to be reliable, and we want to use the match to get some minutes into guys who desperately need it and want it, like Timo [Werner] for example. We will find a strong line-up and show all the respect to Chesterfield. You can lose any game in football, that’s why the game is so popular.”

Tuchel should name a team brimming with several youth prospects despite his comments, as he had done in the Carabao Cup quarter-final against Brentford last month. Jude Soonsup-Bell will likely spearhead the Chelsea attack against Chesterfield, with Ross Barkley and Harvey Vale playing off him.

Lewis Hall will hope to start in midfield, with Ruben Loftus-Cheek starting alongside him in the double pivot. Saul Niguez will be a backup option for Tuchel. As for the wing-backs, Xavier Simons and Callum Hudson-Odoi are the likeliest picks, with Marcos Alonso expected to be rested. 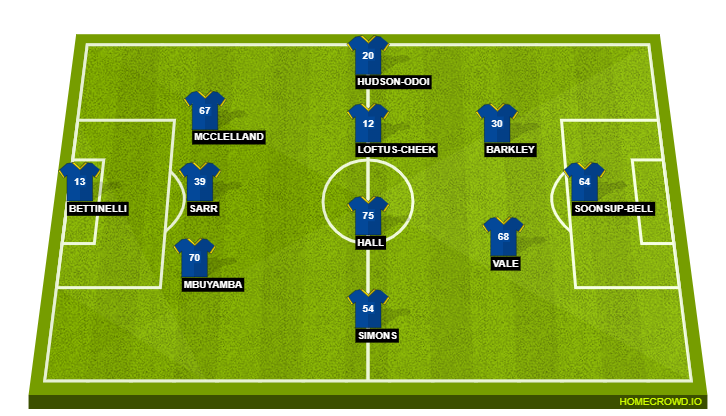 Malang Sarr might be the most experienced centre-back starting for Chelsea, with Xavier Mbuyamba and Sam McClelland forming the central defensive partnership alongside him. Finally, Marcus Bettinelli could be set to make his Chelsea debut, with Kepa Arrizabalaga getting a rest on Saturday.