You are here: Home » news » Predicted Chelsea lineup against Tottenham: Lukaku to return; Jorginho in for Kante
Football News 24/7

Romelu Lukaku and Jorginho should return, but N’Golo Kante will likely be rested when Chelsea and Tottenham Hotspur face off on Wednesday.

Chelsea will be hoping to edge closer to clinching a place in next month’s Carabao Cup final when they play hosts to Tottenham Hotspur in the semi-final first leg on Wednesday night. And Thomas Tuchel has greeted a mixed bag of updates on the team news front ahead of his side’s latest fixture.

The good news is that Romelu Lukaku is available after being omitted from the matchday squad for the game against Liverpool last weekend due to his controversial comments in a recent interview. However, Lukaku has since issued a public apology to Tuchel and Chelsea fans and is back in contention to feature for the Blues.

During his pre-match press conference, Tuchel affirmed that Lukaku is committed to Chelsea and that the issue is in the past now. The Chelsea boss said, “We are happy we took the time that it needed to look on it and to talk calmly about it. This is what we did. Romelu apologised and is back in the squad for today’s training which is later.”

“For me, the most important thing was to clearly understand and believe that it was not intentional. He did not do this intentionally to create this kind of noise in front of a big game.” Tuchel also gave a team news update, revealing that Trevoh Chalobah is unavailable while Andreas Christensen is a doubt.

“Andreas is a doubt for tomorrow. Trevoh is definitely out for tomorrow because he has had a reinjury from before. Timo Werner trained yesterday, we have one more session to go and he feels much better which is a really good sign.”

“He took part in full training, at full intensity and had no reaction at all. If today’s training goes well for him then we will look to have him on the bench and maybe give him some minutes.”

With Werner likely to start on the bench and Lukaku back in contention, Tuchel’s injury woes are easing up considerably. Lukaku should be back to spearhead the Chelsea attack, with Hakim Ziyech and Christian Pulisic expected to accompany him in the front three. Mason Mount should be used as an impact substitute.

Meanwhile, with Reece James unavailable for the foreseeable future, Callum Hudson-Odoi could start as the right wing-back. That decision will mean Cesar Azpilicueta could drop into the central defensive unit, with Antonio Rudiger and Malang Sarr being his partners at the back. As for the left wing-back spot, Marcos Alonso is a certainty until an alternative is signed by Chelsea. 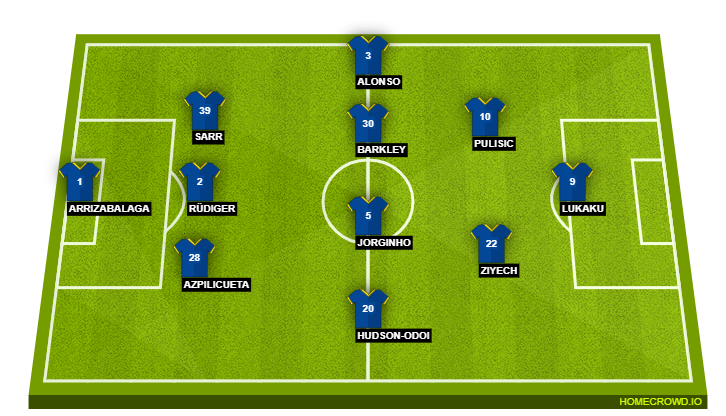 In the middle of the park, Jorginho and Ross Barkley will likely be recalled, with Saul Niguez also in contention to feature. N’Golo Kante and Mateo Kovacic will hope to get some rest but could be utilised if push comes to shove. Finally, Kepa Arrizabalaga is an automatic pick in goal, with Edouard Mendy in Cameroon to represent Senegal at the Africa Cup of Nations.