Leeds United are among the clubs monitoring the progress of on-loan Hellas Verona forward Giovanni Simeone.

According to L’Arena, as relayed by Sport Witness, Leeds United have expressed interest in Giovanni Simeone. The Premier League outfit are currently monitoring the development of the Cagliari forward, who is enjoying an excellent season on loan at Hellas Verona so far.

A product of the River Plate youth academy, Simeone had initially arrived in Italy back in 2016, joining Genoa in a €5 million deal. But the forward soon earned a €17 million move to Fiorentina in 2017 thanks to a 12-goal debut season in Serie A. It was a risk that seemed to have paid for the Viola as the striker netted 14 times in his first season at the club.

However, an underwhelming 2018/19 campaign saw him find the target only six times, which was followed by a few years of steady decline. But it appears the 26-year-old is slowly starting to redeem himself after joining Hellas Verona on loan in the summer.

In just 18 matches, Simeone has netted 12 goals. He has looked very comfortable in front of goal this season, with his productivity being a vital part of Verona’s success so far. But his long-running spell in Italy may soon come to an end, as Leeds United closely keep track of his progress at Verona. 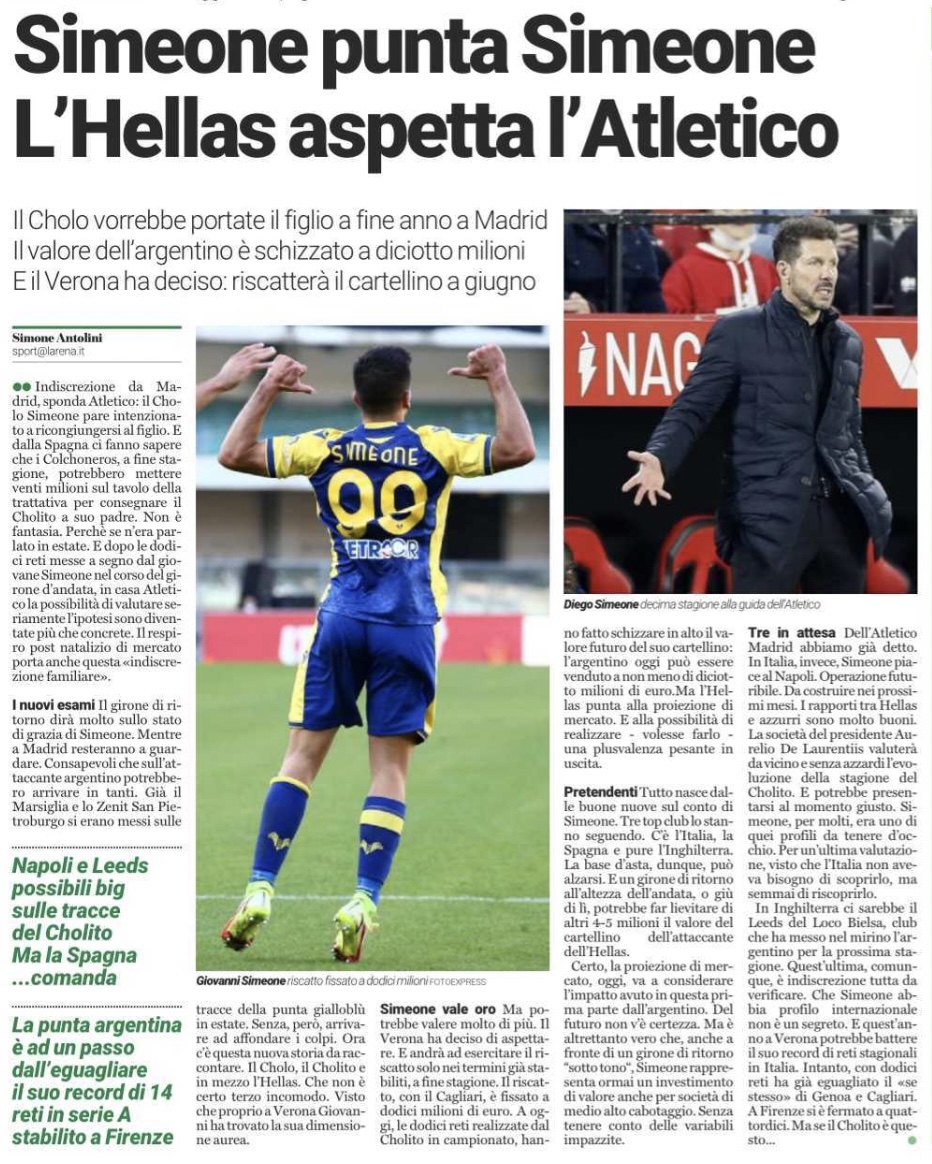 After a disastrous first half of the campaign, the Whites are in the market for a new striker who can provide cover for Patrick Bamford. They have already been linked with a move for USMNT’s rising star Daryl Dike, although the former Barnsley forward is also courted by league rivals West Ham United.

Marcelo Bielsa may, nevertheless, prefer a move for a fellow Argentine like Giovanni Simeone. Although the forward has no experience of playing under the master tactician, the player is certainly rated highly by the Leeds United manager.

The report suggests the Yorkshire outfit intend to sign the Cagliari forward in the summer, once his loan at Hellas Verona expires. The player’s current club have a deal in place that could allow them to wrap up a permanent deal for just €12 million. But a third party outfit may have to fork out €18 million for the Argentine – a value that could increase if the player continues his excellent form in front of goal.

In addition to Leeds United, Simeone is also a target for other European clubs such as Atletico Madrid, Napoli and even league rivals Everton. So it will be interesting to see what the future holds for the resurgent striker, as he looks to take the next step in his career.