Chelsea and Tottenham Hotspur are reportedly positioning themselves to sign Juventus defender Matthijs de Ligt, a target for Barcelona.

According to a report by Spanish publication SPORT, as relayed by Sport Witness, Chelsea and Tottenham Hotspur are stepping up their efforts to secure the services of Matthijs de Ligt. The 22-year-old Juventus defender is also a target for Barcelona.

Matthijs de Ligt joined Juventus from Ajax in July 2019 and has been far from the runaway success many tipped him to be two years ago. The Dutch international has had to share game-time with Giorgio Chiellini and Leonardo Bonucci, with his progress also being blighted by the Bianconeri’s struggles in the last couple of years.

To date, the 22-year-old has made 95 appearances for Juventus, chipping in with six goals and two assists along the way. However, de Ligt is frustrated with his situation at the Allianz Stadium, with the club’s own struggles further pushing him closer to the exit door. Such a situation has captured the attention of several clubs, including Barcelona, Chelsea and Tottenham.

Barcelona’s interest in de Ligt is long-standing, with the Blaugrana also heavily linked with him before he joined Juventus. The continued eagerness to snap up the Dutchman is hardly surprising, considering Eric Garcia has struggled to get going since arriving from Manchester City on a free transfer. 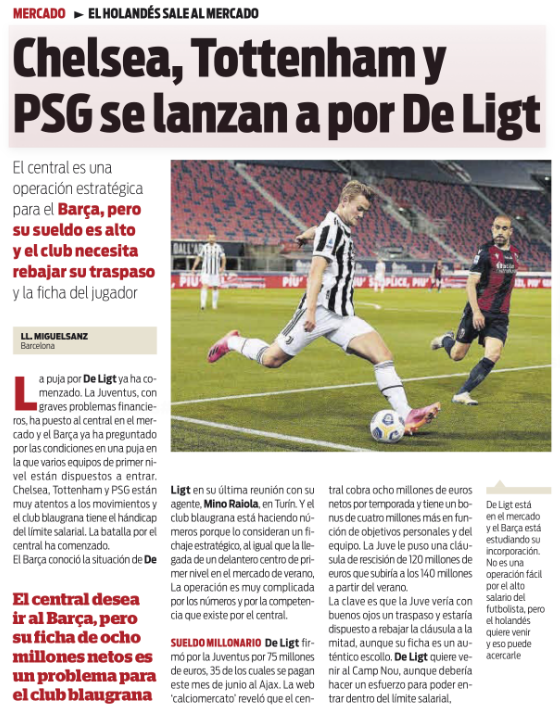 With Gerard Pique in the twilight of his career and Samuel Umtiti’s days at Camp Nou numbered, Barcelona must sign a centre-back, making de Ligt a viable target. As for Chelsea, the Blues are keen on signing de Ligt, as Antonio Rudiger faces an uncertain future at Stamford Bridge.

The German international is in the final year of his contract with Chelsea, with a renewal no closer to being agreed on, leaving the west Londoners in need of signing a replacement. On the other hand, Tottenham should bring in a centre-back as they need to land an upgrade on Eric Dier and Davinson Sanchez. To that end, de Ligt has emerged as a priority target.

Now, Chelsea and Tottenham have positioned themselves to sign de Ligt, according to SPORT (h/t Sport Witness). And the London giants are likely to be in a better financial condition than Barcelona to land the Dutchman. However, Joan Laporta’s close relations with Mino Raiola could still turn the tide their way, and it remains to be seen if they can claw their way back in the race to sign him.